Kickstarter projects are, by and large, a mixed bag.

Some are brought to us by people we know, as with Tim Schafer’s  Broken Age or Zach Braff’s Wish You Were Here flick. Other ideas simply fall by the wayside; cast asunder by the largely disinterested public in favour of the larger, more publicised projects. One or two “projects” have even included attempting to raise bail money for murder suspects or to pay off the Greek debt. Then, finally, there are those ideas that tread the fine lines between dead-cert and forgotten foible, and this is where Loading Human firmly plants its virtual flag.

Playing through the eyes of the lead character, the story unfolds near the end of the 22nd century and follows the exploits of our hero, Prometheus, and his lab-partner/love-interest Alice. We join them as they deal with all manner of things ranging from helping Prometheus’ cryogenically-frozen, half-dead, science-genius father reach a previously unvisited part of space to retrieve the “Quintessence” (the Universe’s ultimate energy source) so that his life-extending “Lazarus” machine can keep him alive well beyond his years, right down to making some herbal tea; all this with the help of their often, both intentionally and unintentionally, unhelpful and slightly unnerving AI assistant, Lucy.

This all takes place inside a futuristic science lab on the icy shores of a vast ocean, and it’s a pretty enough locale. The initial walk to the base from your transport drop-off is a pleasant experience in VR, with snow-covered ground as far as the eye can see. The base really stands out and its largest feature, a very sci-fi looking artificial biome, did fill me with intrigue. It took a while for me to reach it, however, as the control system is a little tricky to master. Your movement is based on where you’ve pointed your body with the right stick, with the left stick controlling your physical movement forward, backwards or side-to-side. The trouble is that until you get the hang of it, you spend a fair while moving in zig-zags, which isn’t normal for a human and lead to a little bit of queasiness. After playing for about 30 minutes I needed a break, which was the first time that’s happened to me on VR (and I’ve played through Driveclub VR). I should say though that when I jumped back in after my break, I didn’t have the problem again and the rest of my play-through took place without incident.

The rest of the story plays out in a series of flashbacks and flash-forwards, as we learn about our mission and our relationships with the other characters through these fairly erratic chronological changes. It’s clear that the game’s developers at Untold Games were aiming for a fresher feeling than to just play from start to finish and even their website says we’re playing through “key points in [Prometheus’] life, moments that have irrevocably shaped him as a person”. The trouble with that is it’s tough to see how making herbal tea or melting some ice on an electrical panel were particularly life-changing moments. Loading Human suffers from the same aches as Heavy Rain where in order to immerse you more in the story, you’re given the more mundane tasks to do, as well as the more interesting ones, which is fine in theory but in reality, whether virtual or otherwise, making tea just isn’t that much fun.

There’s a lot to like in Loading Human, mind you. I particularly enjoyed the attention to detail not only in the environments but also in the characters and story. While the graphics may not be up there with The Order: 1886 or Uncharted 4, the areas where the game takes place feel real enough. The bedroom/living space has a warmer feel to it than the greenhouse area and the science lab feels colder and more sterile than the kitchen and so on. I also appreciated the light bouncing around on the snowy surfaces, giving that magical twinkle that snow has. In fact in some ways the snow looked better than that on offer in two snow-sport games I’ve recently played.

Loading Human‘s environmental elements were equally impressive, with even the corridors between rooms having extra details that could have been left out, like steel reinforcement beams across the ceilings and TV screens showing news reports. In the kitchen you’ll find tins and boxes on the shelves and dishes racked up near the sink, all of which can be picked up and moved around if you wish. Sure, the tins may be a little dodecagonal rather than having actual rounded edges, but when the roundness of tins of peas becomes the indicator of a game’s quality, I think I’ll retire. Overall, the graphics are more than acceptable; the character models are fine, screens of text are clear and everything feels like it belongs – and that makes a big difference in a VR world.

Other areas are also jam-packed with things to look at; the bedroom has a few antique items which, if you look at them for long enough, Prometheus will give you a little information about, and there are books, vinyl records and other objects that can be picked up and inspected. Even the bathroom is full of inconsequential knick-knacks. In fact, given that the very first objective is simply to pick up the fancy, space-age razor and shave your beard, I spent a good five or ten minutes causing havoc by throwing bottles of hair conditioner and toilet rolls all over the place as I clumsily figured out the controls, before stuffing said items into a drawer like a naughty child attempting to tidy their room.

This mess was caused by (or I’m going to blame it on) that same, slightly awkward, imprecise control system that I mentioned earlier. Admittedly, I was using the Dualshock 4 rather than the Move controllers, but whilst picking up items by looking at them and pressing L2 or R2 to use the corresponding hand was easy, placing the items back down meant Prometheus simply holding it at arms length and dropping whatever was being held to the floor. This remains little more than a minor annoyance throughout, but it did force me to restart the game on one occasion where I dropped a mission-critical item (a lighter) and it fell under a chair, which may as well have been on the moon as my hand simply couldn’t reach underneath. 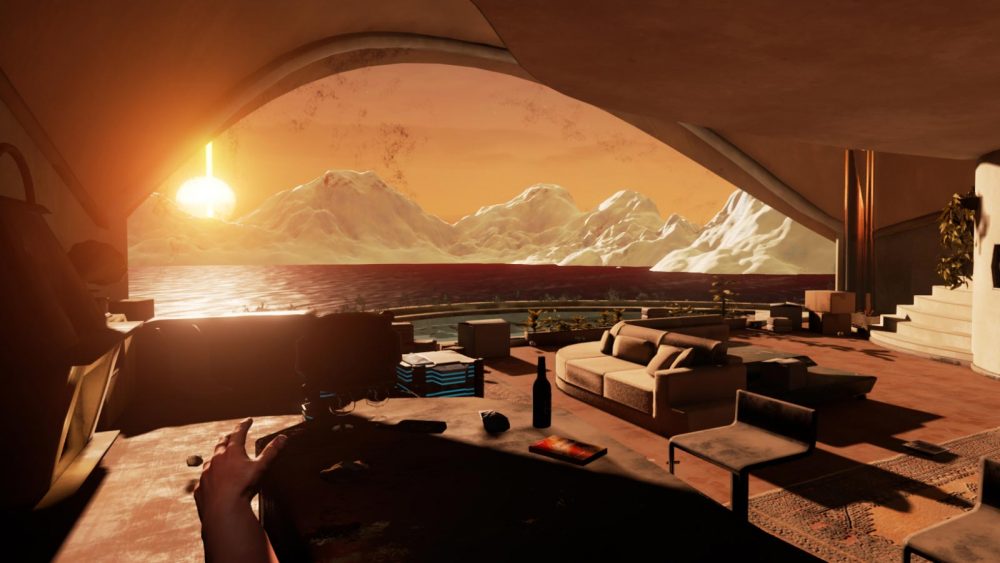 It’s worth pointing out that, considering the game has (so far, at least) only four characters, it impressed with how quickly I felt I got to know them. You don’t interact with the others very much and the only interactions you have are strictly scripted, which could trouble some players, but when you’ve hopped around the timeline a few times, you really notice the difference between Prometheus’ understanding of Alice and Lucy, and the interactions between you all feel much more comfortable in the latter stages. The addition of newspaper articles and the aforementioned TV news reports gives you an insight into what kind of a world they’re living in at the end of the 22nd century, which, while not massively interesting, is at least a nice touch. The rest of the story impresses too; whilst it’s not always tremendously engaging, it left me with a desire to return for part two, even if I do feel the game overall was particularly short.

The crux of the gameplay is to solve fairly simple, usually environmental puzzles, such as putting out a fire, levering open a faulty door or finding a light bulb. Some of these, like the fire, are quite fun, and despite the game’s slow pace, still manage to make things feel a little frantic, whereas others are downright frustrating. Despite having a hint button, it’s not always made clear what needs to be done, and on occasion I was left wandering aimlessly for several minutes before a solution clicked. I’m a firm believer that games shouldn’t be easy and that things these days have been too watered down with huge arrows pointing everywhere, but given how desperately slowly you walk everywhere in Loading Human, each simple fetch-and-carry task becomes a frustratingly slow slog that you’ll lament having to undertake.

Loading Human is not a bad game by a long stretch, but there are too many disappointing aspects that prevent it from being the immersive experience that it should be. Whether its the slow movement, confusing controls or the lack of direction, there’s always something holding it back. All I hope is that Loading Human: Chapter 2 improves on these points to deliver the game it deserves to be. For now though, it remains a massively overpriced, short-lived and distinctly average curio that offers little variety in its gameplay and more than a few frustrating elements. Its saving grace is the immersion factor where, within the engrossing story, the tiny lab begins to feel like home after an hour of play but considering it will likely only last for perhaps three to four hours overall, that’s just not enough.

If, like me, you’re still looking for PSVR’s killer app, then Loading Human is not it. As with most of PSVR’s launch titles, Loading Human is definitely worth a look, as it does offer something unique and the story is certainly intriguing, but it remains a long way from being a must-buy – at least until its inexplicably unreasonable price drops.