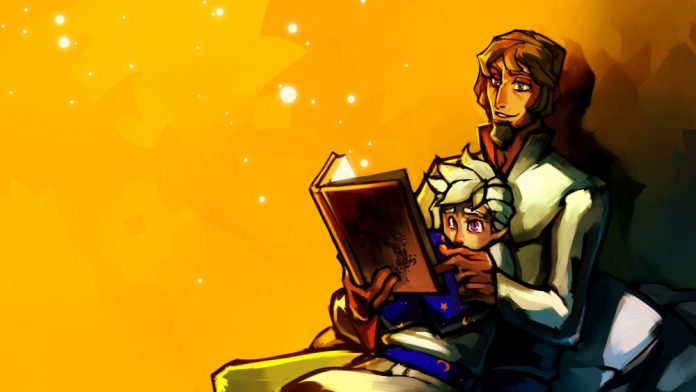 It genuinely warms my heart to think of just how successfully persistent the platforming genre is, even now.

I grew up with a wide array of side-scrolling platformers on my Super Nintendo, and to see platformers thriving in both small and large-scale creations is a comforting sentiment. Pankapu, developed by Too Kind Studio, aims to extend the platforming genre’s lifeblood with its narrative-driven, two-part episodic adventure. With the first episode released in September 2016 and the second episode coming at an undetermined date, I was intrigued to see how the episodic formula will feel for a game drastically different than the typical episodic game – Telltale Games, I’m looking at you. Alas, here we are: Platforming elements? Check. Action-based combat? Check. Intriguing story? Check. Sounds nice, doesn’t it? Keep reading to find out more.

Pankapu’s narrative follows two parallel, yet intertwining stories – one involving the young child Djaha’rell, who struggles with nightmares after experiencing some form of trauma, and the other being an epic fantasy adventure in the dream world of Omnia. Djaha’rell’s father shares a bedtime story about a guardian named Pankapu, created by the God of Dreams and tasked with purging the darkness that invades Omnia. The player controls Pankapu in his quest to save Omnia, while fragments of Djaha’rell’s story are revealed in the form of cutscenes resembling comic book artwork with text dialogue. Though the story is slow to start, it naturally unfolds as a charming adventure. While nothing revolutionary, the story managed to keep my interest for the four hours of gameplay in episode 1 (collectible hunting could extend the experience by another couple hours), and I look forward to seeing how Too Kind Studios manages to extend the plot in the second – and final – episode. It is also worth noting that I was not bothered by the episodic nature of Pankapu; rather, the first episode felt very much like its own standalone experience. Knowing that more of the story will arrive later is simply icing on the cake. 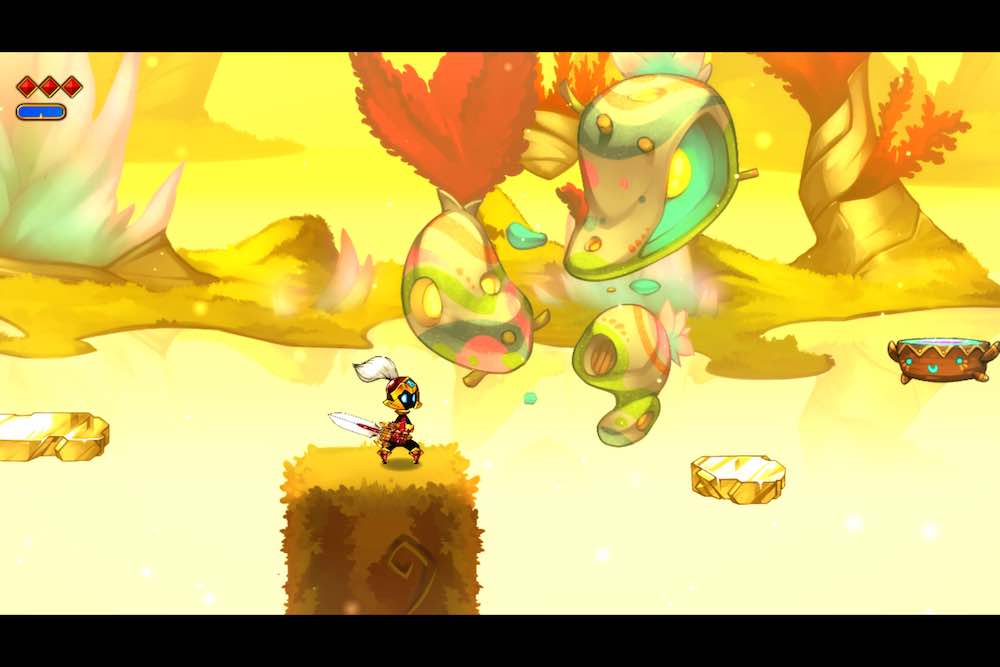 Gameplay initially comes off as a fairly standard action platformer – I often felt myself drawing comparisons to Humble Hearts’ Dust: An Elysian Tail for its narrative delivery, platforming exploration and hack-and-slash combat. Stages are selected from a world map via the in-game menu. Upon starting to play, I quickly recognised that controlling Pankapu is an absolute treat, thanks to smooth movement and jumping mechanics. Each stage has the player alternating between combat and traversal over thorn-filled caverns, deadly water trenches and other environmental hazards. Obstacles often have numerous ways to bypass them, some yielding collectibles in the form of adorable wisp-like creates called Mudjin.

Pankapu’s superb level design creates a challenge for those willing to deviate from the beaten path in search of Mudjin while also minimising backtracking. Combined with tight mechanics, you have some genuinely engaging and rewarding platforming sequences. I would certainly not recommend Pankapu to be played with a keyboard, though. As one of the opening screens suggests, playing this game with a controller is highly recommended.

For every 25 Mudjin collected, the player is awarded a Lutanite fragment, and collecting four fragments results in a permanent health increase. Other collectables are aplenty, including treasures that increase Pankapu’s skill meter and the power of his attacks. Defeating a specific number of each enemy also yields information into the in-menu journal, so those interested in completely filling up the journal will have plenty to keep them busy. One significant grievance was the curious choice not to allow auto-saving of collectables upon collection; if you die, you lose all collectables that you obtained after your last checkpoint. When navigating through a particularly difficult area results in losing some hard-to-acquire Mudjin, regaining all that you lost can feel like a chore.

In most respects, Pankapu’s combat follows the familiar action formula: initially, your actions are limited to a basic three-hit combo and blocking, with numerous other skills unlocking as you progress. Obtaining your Anima meter – synonymous with a typical magic meter – allows for the use of more complex and devastating moves. The way in which your meter is replenished is actually quite clever – rather than obtaining a consumable item drop or using basic attacks, you regain Anima points by blocking enemy attacks. It’s a sneakily effective way of motivating players to implement some defensive tact into their battle repertoire.

Hands down, what makes Pankapu’s combat unique is its implementation of Aegis transformations. Pankapu initially arrives as a sword-toting Bravery Aegis, capable of devastating strikes. Eventually, the Ardor Aegis is obtained, and Pankapu transforms into a bow-wielding ranger, sporting the ability to double jump and fight from afar. Episode two promises an additional Aegis, and each of these job-like transformations can be switched through on the fly. This provides players with the option to intuitively switch between Aegis in a way that suits both their play style and any given situation. Swapping between Bravery and Ardor allows for many pleasing moments visually, furthered by smooth and attractive attack animations. Attacks can be augmented further by utilizing Nebulas – items that provide elemental properties and can also be swapped in real-time. Different elements affect certain enemies in unique ways, rewarding players to experiment with different combinations of Aegis and Nebulas. 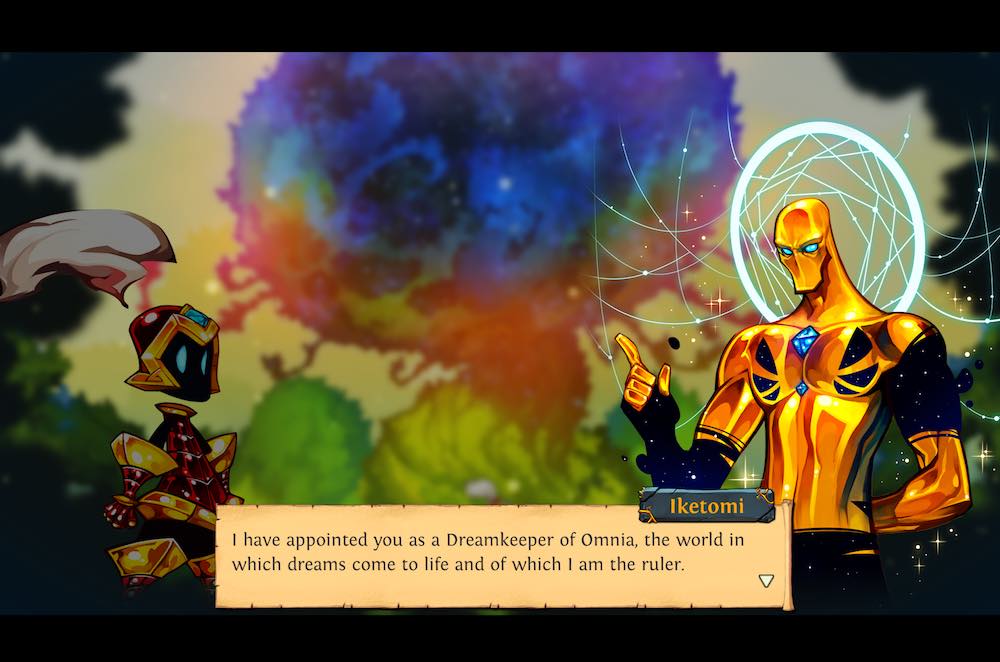 Also attractive are Pankapu’s character models and world. Environments are lovingly crafted and vibrant, and moving between different areas highlights an appreciated level of variety between stages. Whether you are floating along a canal by boat or cautiously moving through a dimly lit cave, each environment has a certain level of charm to it. This charm is amplified by the spectacularly melodic soundtrack, compliments of Hiroki Kikuta, known for composing the soundtrack of Secret of Mana. Beautifully whimsical sounds and songs highlight the elegance of the art direction, portraying Omnia as a world that feels absolutely dream-like.

In terms of bugs, I encountered a minor issue with the world map on two occasions. After completing the first and second levels and returning to the world map, I was unable to move the cursor to select the new stage that became available. After restarting the game the issue vanished, and I never experienced it again following these first two instances. Like I said, it was a minor issue and an easy fix, but I feel that it is still worth making note of.

By and large, Pankapu’s first episode shows a lot of promise. Its story and world are genuinely charming, and platforming through stages with tight controls is an utter joy. Combat, while initially quite simplistic, opens up to a wide array of engaging complexities as you progress. Aside from the minor bug I encountered and the story’s slow start, I really don’t have much negative to say about Pankapu. I thoroughly enjoyed my time in Omnia, and I look forward to finishing the story once Episode 2 arrives. Especially when you consider its budget price Pankapu is absolutely worth your time and money if you’re looking for a high-quality side-scrolling adventure.

Pankapu is available on PC.