Despite Nintendo’s long list of properties and genre explorations, they have very few RPGs under their belt. One of them, Golden Sun, hasn’t been given its due, and for its 15th Anniversary so I think it’s high time to deep dive into this somewhat obscure gem in the pantheon of great RPGs.

The first Golden Sun was released for the Game Boy Advance on 11 November 2001 in North America, and its sequel, Golden Sun: The Lost Age, launched on 14 April 2003 in the U.S. also for the GBA. Finally after a seven year gap the final game to date was released on 29 November 2010 as Golden Sun: Dark Dawn on the Nintendo DS. The short gap between the first two games and the hiatus before the last game are two interesting stories to themselves.

First of all Golden Sun and Golden Sun: The Lost Age were technically being developed at the same time because they were going to be the same game. However, due to the size it wasn’t possible to fit everything on one cartridge, so it was decided that they should be split into two games. As they are a continuation of the same story, a lengthy password system was implanted for players to transfer data between games to carry over progress and seamlessly complete the journey. It was a remarkable feat at the time, one of which few games still have yet to capitalise on (except, most notably, the Mass Effect franchise).

Golden Sun: Dark Dawn was conceptualised soon after the second’s launch, but a lot of complications arose to halt progress. First, Camelot, the developer, was busy making Mario sports titles like Mario Tennis. Not only that, but key members from the Golden Sun team left and the company was unsure if they could move forward with a smaller group. After a long pause, it was finally teased for the Nintendo DS at Nintendo’s 2009 press conference. This event was also notable for revealing New Super Mario Bros. Wii, Super Mario Galaxy 2, The Legend of Zelda: Spirit Tracks, Metroid: Other M, and Sin and Punishment: Star Successor just to name a few.

Now Golden Sun’s plot involves a group of young heroes called adepts, those with Psynergy magic, destined to save the world from a calamity involving alchemy. In order to do this they must seek the power of Djinns that represent the four elements of Jupiter, Mars, Mercury, and Venus (which essentially translate into wind, fire, water, and earth). Interestingly, the first game finishes on a cliffhanger, eliminating certain protagonists, while Golden Sun: The Lost Age continues the story with the surviving members along with new ones. Golden Sun: Dark Dawn takes place thirty years after its events and involves the kin of the previous story’s heroes. 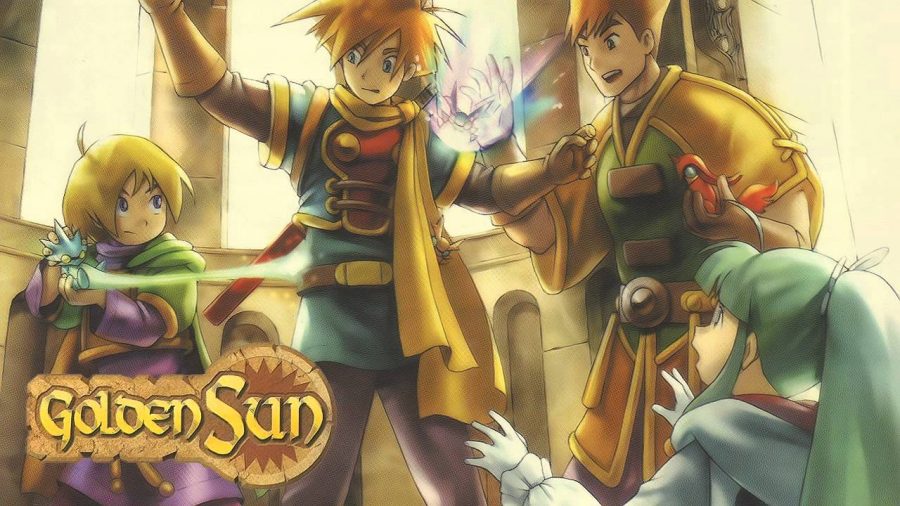 All three titles are turn-based RPGs. They’re fairly simple in terms of mechanics where heroes can attack, defend, use items, and of course, use Psynergy magic bestowed from the Djinns. These involve typical spells like fireballs and lightning strikes, to Final Fantasy-esque summons involving Djinns. The key difference, and most impressive thing about these battle displays, was that they took place in semi-3D. Combat begins with a 2D outlook of both parties, heroes and monsters, facing off as you input your combats. Once you do, both sides will leap forward as the scenes flip around several times with stunning animations. They’re quite impressive even today.

And that’s probably the most impressive thing about the graphics, as the rest of it doesn’t hold up visually. The big-headed characters of the first two games look ugly compared to a lot of other Game Boy Advance games. The aesthetic is sort of carried into the DS game as well, but it looks a bit better given the new grpahcial prowess of the system. Along with this, all three beginnings take a long time to get going in part due to the long streams of text plus the random encounters are pretty annoying to go back to when games have progressed so far without them.

Despite these criticisms and a fairly basic RPG plotline, I think these games are miraculous treasures for both Camelot and its IP holder, Nintendo. Again, the company doesn’t have that many RPG titles under its belt compared to other genres. There is Fire Emblem, Advanced Wars, Pokémon, and two Mario RPG titles. Mario RPG is a hybrid between platformers and turn-based combat, Fire Emblem and Advanced Wars are tactical RPGs, and Pokémon is more of a traditional turn-based RPG, aimed towards a younger audience.

Suffice to say, Nintendo kind of needs a big RPG franchise to call their own. I’d love it to be Golden Sun, or a Smash Brothers-like concept of taking all of their properties and creating a Kingdom Hearts-style action RPG. That’d be magical, but as this is Golden Sun’s 15th Anniversary I think I should nudge Nintendo and Camelot to try for another sequel, or reboot. But hey, feel free to steal both of my ideas Nintendo. Mario running into Golden Sun characters would be pretty magical too.