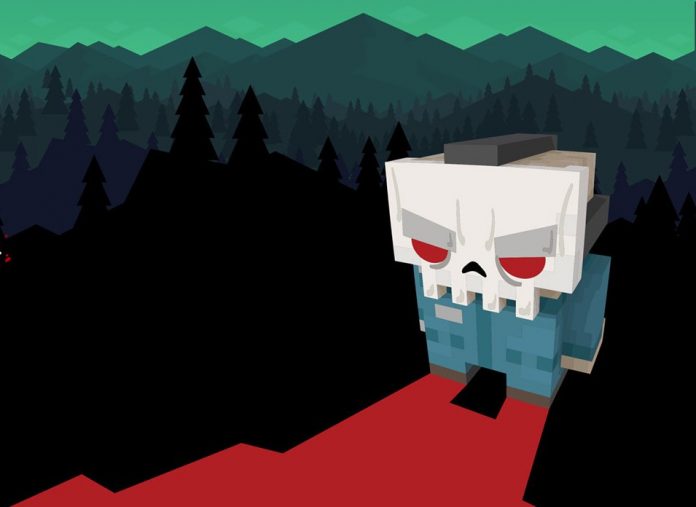 With the upcoming Friday the 13th: The Game and Dead by Daylight, slasher flicks are getting more attention than they usually do in games. In steps Blue Wizard Digital’s Slayaway Camp – a different, more blocky slasher game.

Taking after the various movies that inspire it, you control a crazed murderer with an affinity for killing all those pesky teenagers. Thankfully, in the genre’s usual style, endless sequels and idiotic kids are abound so you have many, many people to deal with – that’s about 200 puzzles overall. Yes, that’s right, this isn’t your usual slasher game, it’s a puzzler, where your chosen killer must work out how to reach his victims, avoiding any calamities himself, and make his escape.

Kills play out as small outtakes, settings menus and rewinding turns is done in the style of old VHS movies. Everything done here is done in perfect style with wonderful delivery and presentation. And it wouldn’t be a good slasher game if not for copious amounts of blood, gore and exaggerated deaths – which are all somehow made rather cutesy. The simple, blocky art style works well with the over-the-top slaughter while making it easy to pick-up and learn – it’d be perfect for children if not for the carnage. 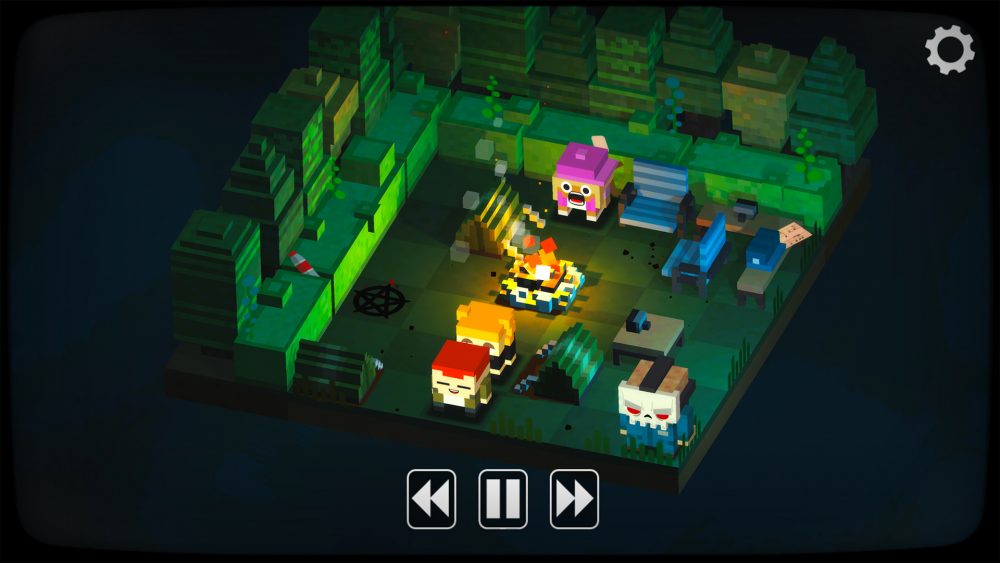 Along with the game being easy to immediately pick up and play, it is a puzzle game, so it does start out on the simpler side. The entirety of Slayaway Camp’s gameplay is based around an almost mobile-like sliding mechanic. Each scene is a small, isometric area and moving in any one of the four directions will slide you along until you hit a wall, victim or danger forcing you to stop. The goal at hand is to clear out the various camps and theme parks of all those annoying kids.

As you go on, things become more advanced. Dangers are introduced, such as water, firepits and holes which are as lethal to you as they are to the victims. Levels become more maze-like and planning ahead is required to successfully move around, massacre and escape. With no tutorials, you quickly begin to learn the more advanced tactics needed such as taking advantage of where you stop after killing or people running away from you.

After completing a scene you get a small “click-at-the-right-time” minigame which can earn you extra coins along with those you gain after each level. Coins are used to unlock more gruesome and absurd ways of killing people, as well as extra murderers to conduct said killing with. If I’m being honest, the whole shop system just seems out of place, a little too expensive and unneeded. Even with completing every minigame, I found I only had enough coins to buy one thing per movie. I decided to choose a random killer to mix things up and was given another killer anyway on the next movie.

Next time around, I decided to buy a new killing style and it took so long before it even turned up that it didn’t feel worth it – whereas the base kills you instantly receive seem to repeat quite often. It all felt as if the developers wanted a sort of “progression system” but the game seems like it would work better without. 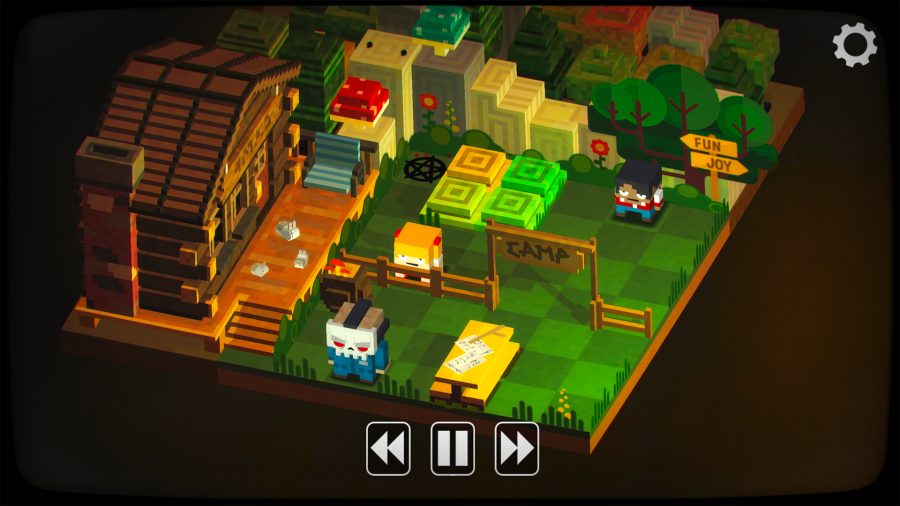 Barring that minor hitch, there isn’t much wrong with Slayaway Camp – if only because there isn’t relatively much here. Not that it’s short; there is an absolute wealth of puzzles to work through, just there isn’t much else to the game except puzzles and its tremendous style. One warning however is if you’re bad at puzzle games you may find yourself struggling a few hours in. I will be the first to admit how utterly horrible I am at these games and I did end up becoming stuck quite often in the later movies.

Slayaway Camp isn’t a large nor an expansive experience – but it doesn’t want to be. It wants to be a simple puzzle game that through evolving mechanics becomes a difficult and satisfying experience. It revels in both the ludicrous and outlandishly fun things that come from its original genre while making fun of its stupidities. It won’t be for everyone but for those who enjoy basic puzzling at its best, Slayaway Camp is a killer.

Slayaway Camp is available on PC.