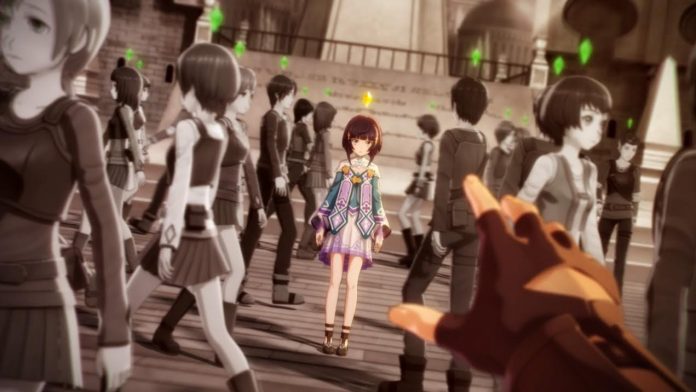 It’s certainly justifiable arguing that Bandai Namco has saturated the market with Sword Art Online games as of late.

Fortunately, Hollow Realization can serve as the first entry to the series for new players; the game provides an option for players to recap the events of both Hollow Fragment and Lost Song. This time around, Kirito and the rest of the gang find themselves returning to a virtual world eerily similar to the version of Sword Art Online that imprisoned them in the past. Rather, the ominous tower that once trapped them has been remade into a vast landscape under a new name: Ainground. During their initial adventures, Kirito encounters a peculiar NPC – a small girl, lacking a name and any other programming details that a typical NPC has. Curious about the girl, Kirito and friends decide to inquire about the girl and investigate what her existence means for this new virtual reality MMO, Sword Art: Origin.

Make no mistake, those looking for a meaty JRPG need look no further. A pleasantly surprising amount of story content is available here, and while the story begins at a generally sluggish pace, it does so to provide context and give meaning to each supporting character. Disappointingly, most cutscenes are presented with static character images, though the fully-voiced (Japanese) dialogue cuts away some of the tedium. My experience with the atrocious localisation of Hollow Fragment’s PlayStation Vita version has me pleased to report that the writing in Hollow Realization is generally quite good and makes logical sense. Granted, the writing is far from a masterpiece, but it is in most cases charming and keeps in line with the light-hearted banter that fans of the series have come to expect.

Hollow Realization’s overwhelming amount of content could also be regarded as one of its faults, however. Specifically, this criticism lies with the outrageous amount of side quests offered throughout the game. Nearly all side quests are extremely limited in terms of their variety, as well. Early into the game, I wandered over to the quest board to see that a whopping 35 new quests were added since my last visit. Upon reviewing these quests, all of them involved either killing specific monsters or collecting item drops. Numerous requests even asked for the same type and quantity of an item. I never encountered a limit on obtained quests either, so in most cases I took all offered quests and completed many without even paying attention to them. If I found that I was underlevelled for a given story mission (which was not often, given the game’s reasonably easy difficulty), only then did I turn to side-questing. 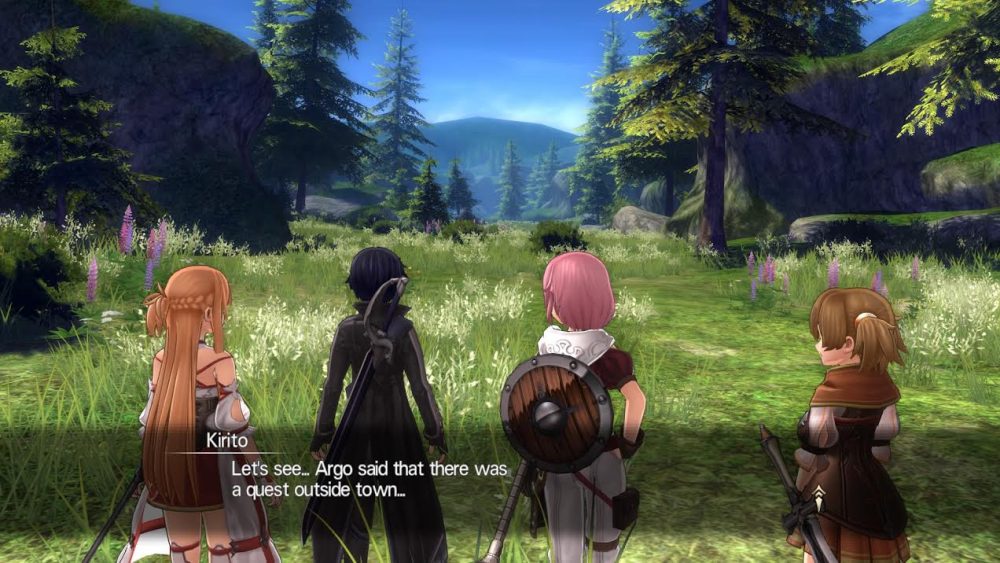 I also found issue with the lack of direction that the game provides the player when trying to complete certain missions. This is not always the case, but there appears to be a lack of consistent quality in how the game guides the player along. In one instance, I was tasked with gathering materials to create gunpowder to blast away some rocks blocking my path. The NPC told me of a particular type of seed and an item drop from a dragon, and briefly told me of their whereabouts. I then proceeded to wander aimlessly through those areas for an unreasonable amount of time without success. I checked the “Event List” section of the menu, where instructions were limited to a few words: Gather the materials to make gunpowder. The world map offered only a quest marker on top of the teleportation waypoint that it deemed nearest to each objective. Once at that location, however, the responsibility falls solely on the player to stumble upon the correct location.

These instances, while infrequent, were extremely frustrating. What doesn’t help is that many of Hollow Realization’s locations feel generic and uninspired; compared to the genuinely impressive character and monster models, the bland environments feel like a missed opportunity.

That frustration was soon alleviated, thankfully, by Hollow Realization’s accessible, yet surprisingly deep, combat. Battles are performed in real time, and those uninterested in learning the intricacies of combat can perform generally quite well by simply button mashing. In more difficult encounters, though, incorporating thoughtful strategy can mean the difference between getting outclassed by a mile and standing a fighting chance. Flashing markers on the ground indicate an enemy’s upcoming attack, and the ability to sidestep out of harm’s way is a flashy and fun way of keeping the player engaged. Initiating combos through repeated attacking temporarily boosts a damage multiplier, which motivates players to pair their attacks with fellow party members.

Each weapon proficiency also features a wide array of flashy battle skills to unlock. Using battle skills in unison with other party members unleashes combo attacks for massive damage. A maximum of four party members (including Kirito) can be grouped at one time, with characters fulfilling different roles – tank, attacker, healer, and so on. 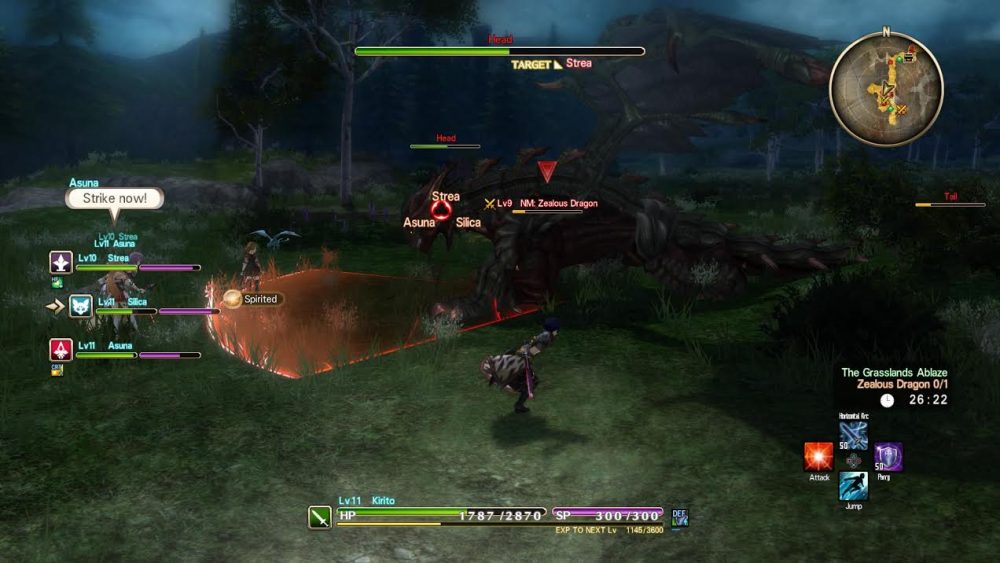 These aspects of party AI can be reinforced or downplayed depending on the praise that the player provides each type of action. Skills and behaviours fall under different categories – Asuna, for example, has Fiery, Smart, Nosy, Kind, Caring and Planner. Provide Asuna with enough praise when her actions fall under the Kind category, and she’ll be more likely to provide healing and support to the rest of the party in future battles. Emphasise Fiery actions and she’ll act more like a front-line attacker. It’s a slow process to see noticeable change in AI behaviour, but it is certainly beneficial in the long run.

Considering that party member AI is typically quite lousy, you’ll want to take advantage of every opportunity that you can to train your group. Issuing commands during battle – dodge, target a specific enemy, or draw an enemy’s attacks, to name a few – can be both helpful and a nuisance. Timing an all-out assault on a stunned enemy is thoroughly satisfying, but the need to bark orders for defensive actions seems counter-intuitive. Normally, you would expect your party members to dodge an incoming attack or heal as they see fit, but instead, it falls on the player to make the call. When your party members are expected to support you, it feels a bit distracting to have to babysit them in this regard.

When you’re not babysitting your party in battle, Sword Art Online: Hollow Realization gives you the option to earn their affection. As in previous games in the series, spending time with and initiating basic conversations with characters will increase their closeness with Kirito. A higher closeness level opens the way for more personal conversations, where you can interact by nodding, shaking your head, moving closer to hold hands, so on and so forth. Press your luck a little too soon in these instances and you end up souring the mood, ending the conversation abruptly. Take your closeness level all the way, and you can even initiate some age-appropriate pillow talk back at the inn.

Faults aside, Sword Art Online: Hollow Realization is an enjoyable and lengthy adventure. The main attraction here is undoubtedly the original story, which is sure to lure in fans of the series. Despite sloppy AI, combat is fast and satisfying, provided that you don’t get bogged down by the overwhelming amount of boring side quests. Hollow Realization is the strongest iteration of Sword Art Online to date, and an easy recommendation for fans of the anime and previous games. Provided that all goes smoothly, I’m optimistic for future titles in the series that Bandai Namco cranks out.