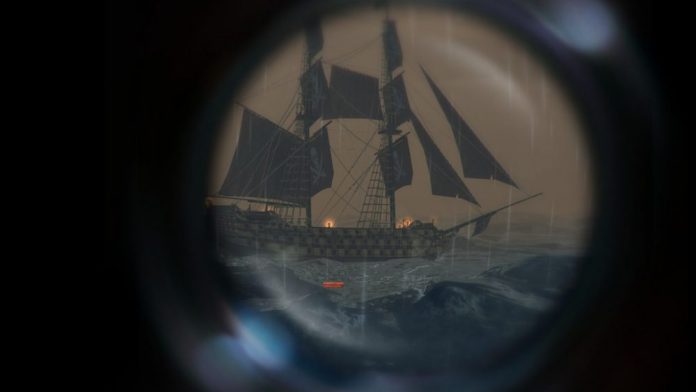 Pirates – we all love them.

Well, maybe not them directly but we certainly love getting to be a pirate. Sailing the seven seas, drinking rum and fighting off the evil monarchy of Britain – it’s a glamorous life. So why are there so few pirate games? Tempest is here to take the helm and try to sail the genre to glory. Unfortunately, Tempest isn’t all that good a sailor.

You take control of a new ship, along with a crew of 16, after your previous vessel is destroyed by the Kraken. As expected, the main goal for much of early game is to find your old crew and take down the beast. But the pirate’s life – aside from being pretty rock and roll – is difficult. The sea is covered with ships, ports and fortresses from varying factions – and it’s up to you to decide who you will side with and who shall sink before you.

First things first, Tempest is a sandbox game. The main quest, what little there is, can be completely ignored and is no more or less important than the hundreds of other quests you will encounter. And like many sandbox’s the game has a cycle; a repetitive one. Everything you do is done from a port: recruiting, repairing, buying, selling, storing, organising and finding new quests. Once you have finished, you sail out to the sea, complete a mission and gather any loot, return and repeat.

Some games do repetitive cycles well; many do not. One of the most notorious examples of doing it well is Mount & Blade: Warband. It’s not perfect; most things outside of combat in Warband are poorly done and often monotonous but it is saved by the combat, which, like in Tempest you will be doing 70% of the time. Warband’s combat is unique, satisfying and, through the mechanic of being able to control your entire army, can be highly strategic. Unfortunately the same cannot be said for the Tempest, which, at best, feels like a poor man’s attempt at Assassin’s Creed: Black Flag. 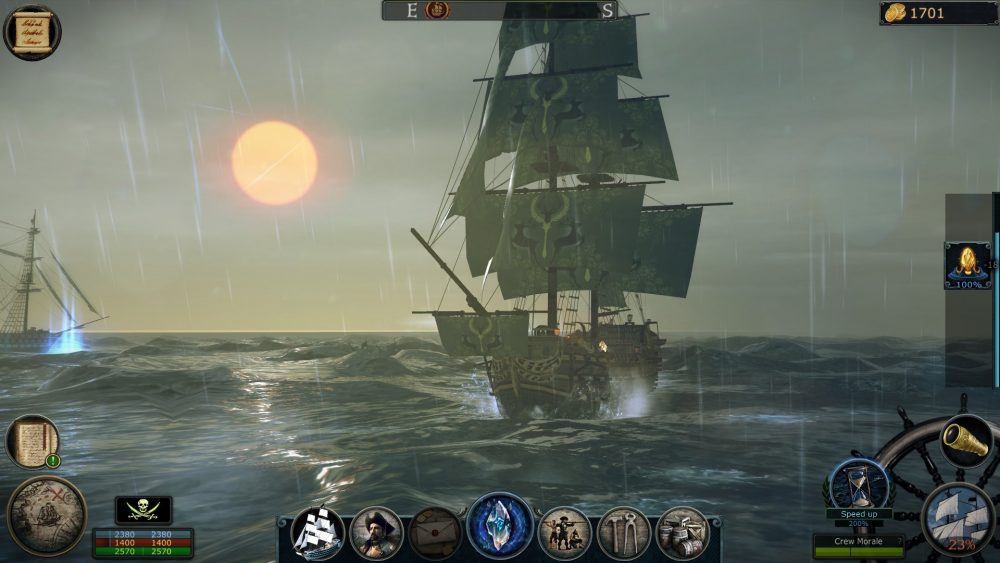 Sailing around, like combat, is done from a third-person perspective – although you can zoom in, which I would highly recommend – and you can easily control your ship using WASD, even if ships are a little too agile. The ship itself has three “speed” settings: full-sail, half-sail and no sail. While it can feel satisfying to control your ship and perfectly line up shots it would have been nice to have more environmental interaction. The game looks good (unless you get up close) and when tempests, storms and large, crashing waves get involved it can be visually impressive, but whilst tornadoes and such will damage your ship nothing really effects how it controls. You’d expect large waves to push the front of the ship up in the air but your ship just seems to stay… flat. It can be off-putting when a massive wave approaches and instead of crashing into you with force you just sail straight through it, disappearing for a few seconds.

Most combat will be conducted with your ship’s broadsides. Large blue lines stretch out from each side of the ship showing where the cannons currently aim. You get an advantage or disadvantage to your accuracy depending on how close you are and keeping a continuous lock-onto an enemy for a few seconds will give another bonus. In all honesty, combat just isn’t that satisfying. You turn a little, wait for the lock-on bonus and fire. Weapons you acquire later on such as mortars just require an extra button push (no aiming) and larger ships and crews just mean more damage done.

The little diversity in combat comes from each ship’s various health bars; one each for the sails, crew and hull. Different types of ammunition provides different damage: using chain or bar shots slowly destroys the enemy sails, slowing them down, whereas basic cannonballs just damages the hull. Dangerous shrapnel, fire or poison deals damage to the crew of a ship, making it easier to board.

Boarding a ship is perhaps Tempest‘s most unique – and disappointing – feature. A successful boarding will gain you much more loot and possibly even a better ship so it’s best done every so often. The problem is there is just no interaction. When boarding you see a zoomed-in shot of your men and the enemy men fighting, and the first to lose all crew loses. Depending on what crew you have, you can press a button to board, throw poison over or aim at a specific enemy. That’s it; there’s no gameplay to speak of – it’s just a case of waiting and watching some ugly character models shoot at each other. 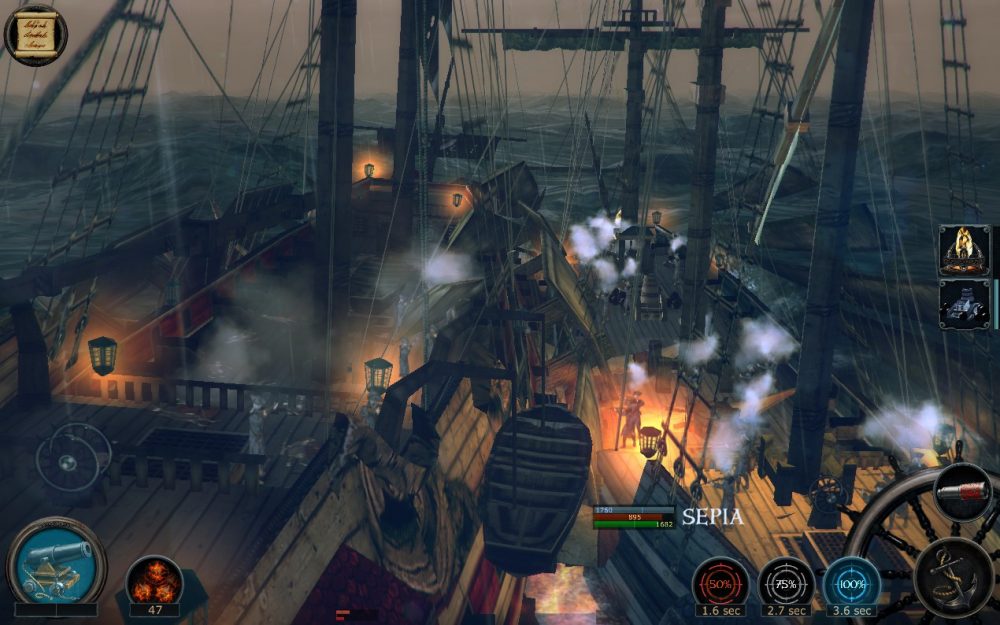 This, like the game itself, could be remedied if not for the game’s biggest failing: personality. When you lose a crew member, you don’t care. None of the crew have names (well, some do, but they don’t fight or even count as crew) and their only effect is minor stat bonuses. When one is lost you can easily sail to a port and replace him. The crew members, like the game itself, have absolutely no personality.

You would think a pirate game would have a brimming personality. Yet, sailing around, doing mission after mission, I never feel like a pirate. I never dig up treasure, get in trouble with the law or even meet any famous pirates. All of these things are cliché, yes, but they are something. Something to break up the monotony of doing another quest where it ends with another fight; something to do while sailing towards that quest; something to do while sailing back to repair after a quest.

Tempest is just an ever repeating cycle of quest after quest, where even the quests themselves are repetitive. The combat isn’t satisfying, nor does it have enough depth to keep things entertaining for longer than a few hours. And yet, that’s all the game offers: infinite quests so you can keep on sailing and fighting forever. You won’t want to though. It’s unfortunate that there are very few pirate games; Tempest could have satiated a niche in the market, but it misses the mark in too many ways to be at all seaworthy.

Tempest is available on PC.