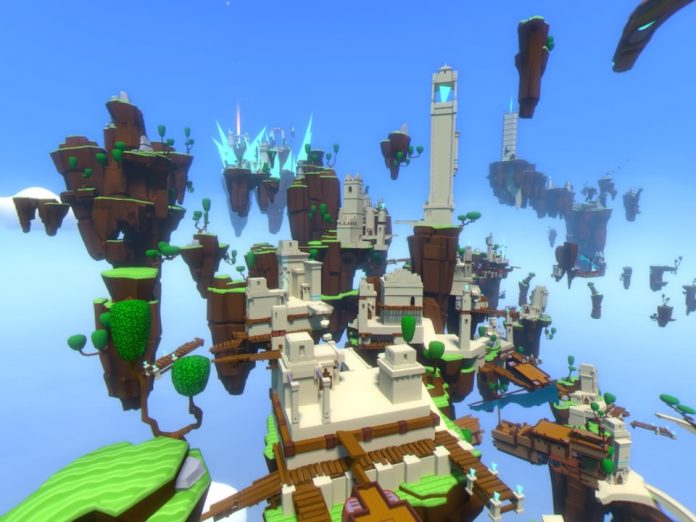 Windlands is a rarity at this point; an actual game, surrounded by a slew of “interactive stories” and “experiences” that make up the rest of PSVR’s undeniably impressive launch line-up.

But is it a system seller? Sure, it’s a genuine, bona fide, story-driven game for PSVR from indie developers Psytec, but does it do enough to justify its own existence, while rubbing shoulders with the likes of RIGS, Driveclub VR and Battlezone?

We begin our journey in a dark room with a narrow sliver of light slipping through the large, stone doorway. Following the light, tentatively, we are lead, with blinking eyes, into the bright and airy world of Windlands. The atmosphere is a crisp, fresh, almost eerily cheery one and you’re awestruck from the off by a titan rebuilding itself next to you. This is where Windlands is at its best, offering epic scale and pretty vistas. At its worst, it’s a frustrating slog through worlds of almost imperceptible cosmetic differences with the feeling of a promise never quite fulfilled.

To begin with, the game gently eases you into its mechanic of (what it refers to as) parkour, by offering a few seemingly simple platforms for you to jump across. Fortunately, it also grants you a large open space at the start on which you can practice your movement options. I’ve seen and heard tales of people finding Windlands a particularly intense VR experience, and though I didn’t have any trouble myself apart from perhaps five minutes to almost literally find my feet, I could certainly understand how it may feel that way. Fortunately, Windlands offers a number of ways for you to tailor the VR intensity so that users of all levels can enjoy the game in comfort. These range anywhere from offering you a very cosy steel cage or a gentle bubble of energy to move around in, to dropping you into the world unprotected for greater immersion. You can even adjust how you move your head in-game; of course the PSVR headset will look where you do, but if you need to turn a little further (and you lack the flexible neck of an Owl) then tapping the right stick will let you look left and right just as in any other first-person game. Whether it turns you in a single, smooth, vomit-inducing motion or in smaller, far more comfortable sections of around 30° each, is up to you, but I’d suggest the latter, at least until you’ve settled in nicely. 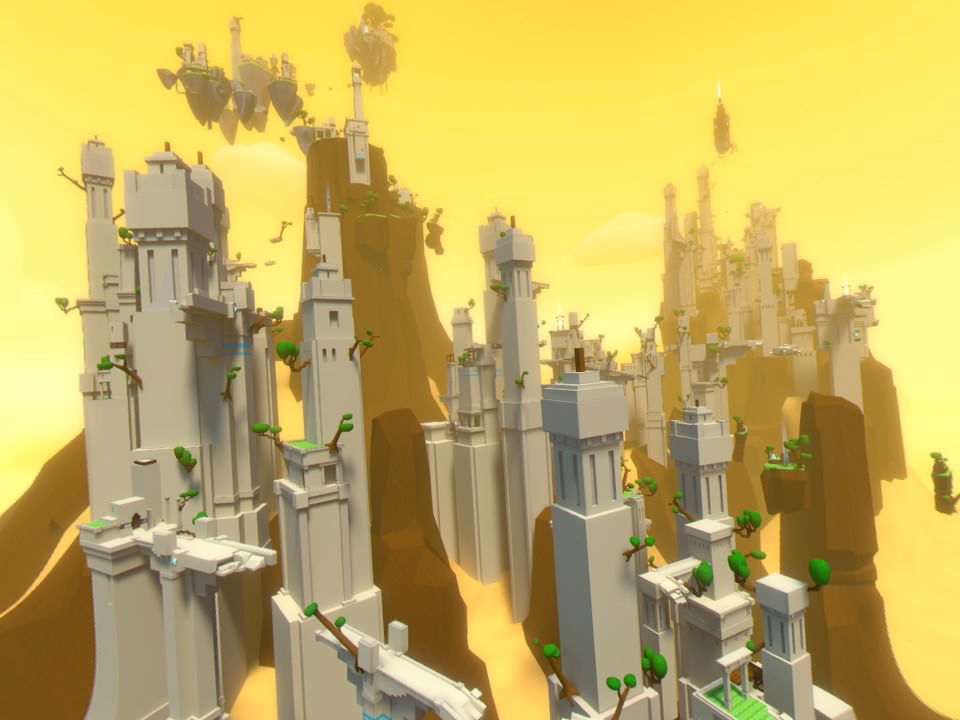 Windlands‘ very straightforward story takes place among the ruins of an ancient civilisation whose huge, hulking, stone buildings still stand and hold crystals at the pinnacles of their greatest monuments. Excellent draw distances and a good sense of the size and scale of the environment help make up for the relatively lacklustre textures that you’ll notice more and more as the game wears on. The aim is simply to traverse the world in order to collect the crystals and any stone tablets that have been scattered across the titular Windlands. Once collected, the crystals will open up new realms to explore. There are three in total: Jungle, City and Sky, though each one is disappointingly similar and these are accessed via a world hub which houses large portals to each of the other realms. Accompanying the harmless aesthetic is an equally harmless and fairly underwhelming soundtrack which sounds almost medieval in parts (if you notice it at all) and while the sound effects that accompany your movements are good, the mixing is skewed a little, making some actions and voices either too loud or too quiet. While this is easily resolved with a little tinkering in the Audio menu, it feels like it shouldn’t be necessary.

Movement is simple: hold the left-stick to move around and press X to jump or wall-jump with a longer press affording greater height. Once you’ve acquired your grappling hooks, L2 and R2 fire a hook each. Use one or both alternately to swing around or use both at once to zip towards whatever you’ve grappled, usually one of the green trees or bushes you can see in this article’s pictures. It will feel as though you’ve gotten this down pretty quickly as within just a few minutes you’ll be swinging off through the jungle with relative ease but in truth, the system is, as Atari founder Nolan Bushnell once prophetically said, “easy to learn yet difficult to master”. This does add some depth as you’ll most likely only pick up the basics early on and these will see you through before you realise, far later, that there’s a bit of a knack to using the ropes. Add that wall-jumping mechanic to this formula and it makes for some pretty interesting platforming. There’s no tutorial as such in Windlands, which is an interesting choice given the nuances of the controls, but as the basics are simple enough to learn. While this isn’t a critical error, it’s a shame that the traversal, which is such an inventive concept, fails in its execution.

The game can be completed by only collecting the crystals, which are placed at the far ends of three distinct paths within each of the worlds and this will take around five to six hours, but collecting the 40 stone tablets which are scattered throughout the game will add to this time significantly. To begin with, you may only grab the tablets that you walk past or can get to with a few jumps, but once you’ve figured out how to use the ropes a other movement options a little better, the tasks of looking for and collecting tablets becomes less daunting and offers more fun, if the repetition and somewhat underwhelming gameplay hasn’t worn you down by then.

That’s the main stumbling block for Windlands; I kept expecting something else to be added. Not necessarily monsters, space-battles or black-market trading, but perhaps some other means of traversal besides just the grappling hooks; perhaps something akin to the extra elements that were slowly introduced during Portal 2, where each one added something new to the mix to alter the puzzles slightly and keep things fresh, but no. The trouble is that six hours with a single, fairly fun means of conveyance is fine, but since when was “fine” any more than good enough? The whole time I was playing, I kept thinking “This is fine, but how good would a Spider-man VR game be?!” (That’s trademarked. My idea. No stealies!) Even the advanced method of using the ropes, which means using L1 and R1 to control the length of the ropes as well as the speed of the grappling effect did little to alter the challenge. It’s as if Windlands is trying to be all things to all people, offering itself as both an experience for casual gamers to slowly meander their way through the levels and an actual game for those who’d prefer to run, jump and swing their way to victory and I can’t help but feel it’s not perfectly suited to that more intense play style. In truth it’s more comparable to Myst, where the absence of any direct threat means it can be played at a slower pace and I’d say that would be the best way to experience it. 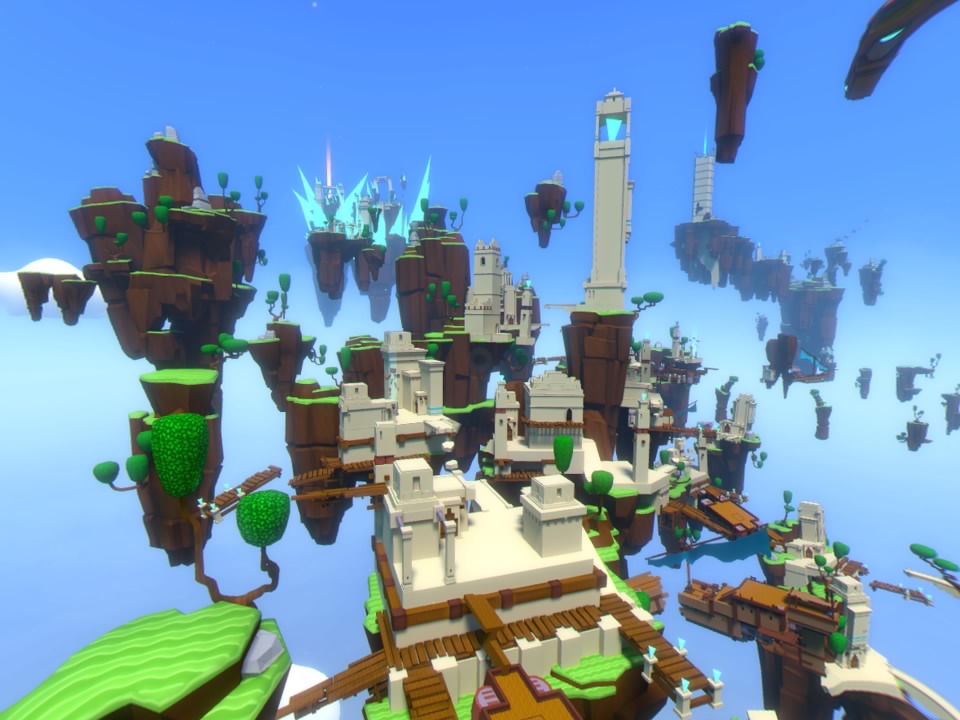 Windlands is a good opportunity to experience a VR environment as it gives you total freedom of movement and a pretty enough world to look around at. Besides that, it offers little for more seasoned gamers to get their teeth into. A bland soundtrack matches the bland visuals and gameplay with only very occasional stand-out moments, such as reaching the highest point of a level and surveying how far you’ve come, before jumping and falling hundreds of feet back to the ground to break up the monotony. But given there are only nine or so of these moments during the five to six hour campaign, I’m not sure that’s enough. Initially the small, sub-2GB download had me confused as to how a VR world could take up so little space, but now I realise that’s because it’s mostly bland, empty space and I can’t say that spending £18.99 on a large amount of nothing is particularly appealing.

Some people are crazy for Windlands and I agree that, for a lower price, it’d be tough to hate on it too much as it does provide some variety for early adopters of PlayStation VR, but if you’re looking for a high-intensity VR experience, or something with a little variety and excitement, Windlands may not be for you. Otherwise, if you want something a little different to put your new headset to good use, then this might be just the ticket.

Windlands is available for PC and PS4. We reviewed the PS4 version.