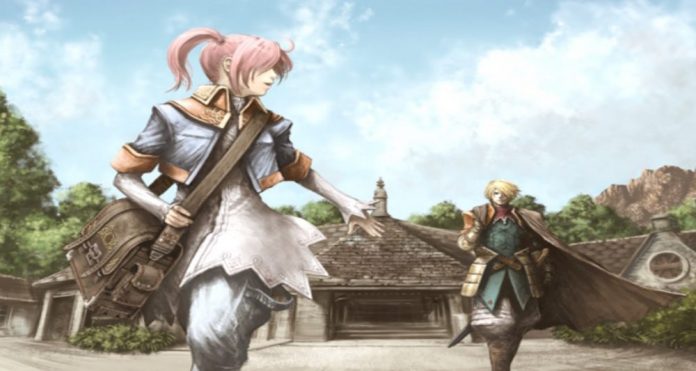 Xanadu Next is a labyrinth of concealed treasures: its title is derived from Kubla Khan, a famous poem written in a dream state by the infamous opiate addict and literary genius Samuel Taylor Coleridge.

Originally released in Japan in 2005, Xanadu Next has waited 11 years for worldwide PC release, being published by XSEED games in November of this year. What is most startling about this title is that despite its age, Xanadu Next’s extraordinary sophistication in the realms of level design and gameplay mechanics means it has stood the test of time despite sporting PS1-era graphics. Though flawed with some minor control and sound issues, Xanadu Next is still a title that any self respecting RPG lover simply must have.

The poem Kubla Khan depicts the paradisical Eden of Xanadu, featuring ‘caverns measureless to man’ and a ‘sunless sea’, all created at the behest of the eponymous Kubla, the descendant of Ghengis Khan, one who ‘on honey dew hath fed / and drunk the milk of paradise’. Xanadu Next uses the poem for a basis to create its enchanting lore: the once mighty Kingdom of Xanadu now nothing more than a mysterious series of ruins on Harlech Island which the young Charlotte L. Wells and her protégé, a disavowed knight, wish to explore for remnants. You play as the knight, and as you journey through the depths of Harlech Island you begin to discover tabulae and memoirs from the older kingdoms, telling of sacred swords, demonic dragons and heroic kings, piecing together the history of the land. Despite the presence of typical Japanese and Western fantasy tropes galore, the world of Xanadu Next offers a unique charm which is hard to beat; the eerily off-beat use of Coleridge’s poem in inspiring its lore (the ‘caverns measureless to man’ certainly form the basis for one of the areas) and informing the game’s mood and character give Xanadu Next an edge of many of its blander relatives. The mythical vision of an idyllic kingdom, but one also fraught with terrors and secrets, is never far from the narrative or gameplay.

Xanadu Next describes itself as an action-RPG. Its control system is reminiscent of such ancient PC titles as Darkstone, only it is far more fluid and fast-paced. The controls are simple: click and hold the mouse to move your character. Mouse-wheel to adjust the camera. Click on an enemy to attack. Right click to use the currently equipped spell. Though this would apparently create a primitive hack ‘n’ slash approach, it actually breaks down to something far more sophisticated. Magic offers not merely an arbitrary distinction between damage types, but real tactical choice. Lightning spells, for example, can hit multiple enemies in a straight line and have a chance to stun for a few seconds. Fire, on the other hand, is slow, hits enemies in a radius and deals the highest damage. Needles, which are rather like magic missiles, are the fastest but lowest damage attack. Already this provides an array of ways to engage an enemy, let along the variety of melee weapons.

Different stats affect how you perform in combat. For example, Reflex affects hit rate and chances to evade and parry attacks, whereas your Strength affects damage output. These are some of the simpler stats: others are more complex in how they operate and it takes some working to determine what their true value is. This is certainly a pre-Skyrim RPG, one in which nothing has been dumbed down for anyone. In addition, you also have a Guardian Card, which acts much like an Elder Scrolls star-sign; the Guardian, a semi-divine being, grants a boon relevant to their magical domain. This could be anything from extra health to additional weapon expertise. The Guardians are also woven into the lore of the world and the narrative, and there are lots of them, adding an immense depth both to the gameplay and narrative. 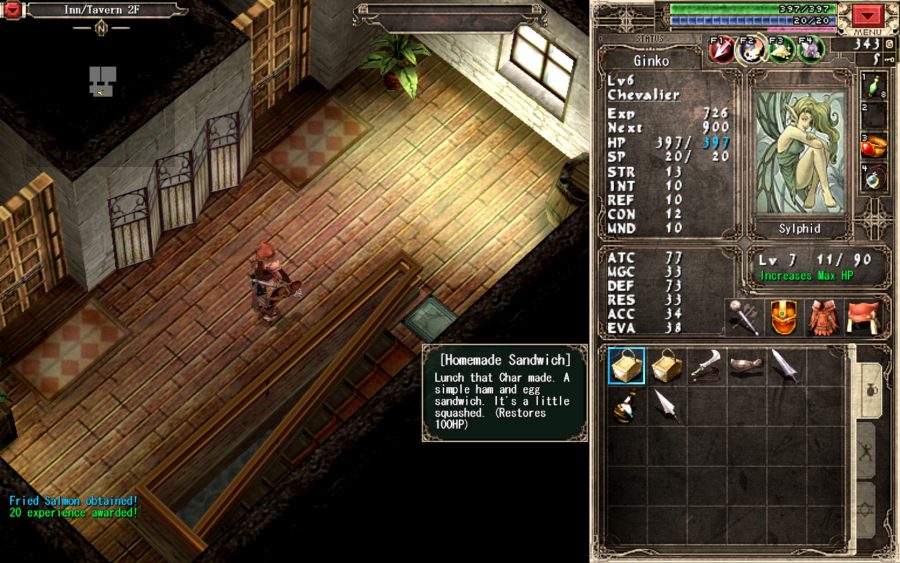 Much like an old-school dungeon crawler such as Baldur’s Gate: Dark Alliance, the rooms are segmented and the camera is predominantly aerial (though not a bird’s eye view). The transition between rooms is flawless, so there are no awkward load times. Enemies sometimes repopulate when moving back through an area, sometimes not, so you always have an element of risk staying behind to search for items or backtracking. The variety of enemies is similarly laudable. Within half an hour of gameplay I had already faced everything from skeletons to bats to goo to a variety of goblins of different races. Each enemy fights very differently and poses unique challenges to overcome. There is certainly an element of Dark Souls in the way that the enemies mercilessly attack en masse (and prove tougher than you might first realise). The levels are similarly devious, dove-tailing, and often end up joining up in unexpected ways, offering shortcuts and time-saving cut-throughs just when you thought you faced an inhuman trek. Many of these areas cunningly loop back into the starting area which is where you’ll find your save totem, shops for re-supply and also your only means of translating the lore-giving tabulae. This is intelligent game design at its best and certainly must have inspired Miyazaki’s legendary series. There is even a certain two-handed weapon which can be unlocked (and requires immense strength to wield): yes, there’s a Zweihander in Xanadu Next– I’m not saying Miyazaki stole it, but, well, he did, didn’t he? Picasso once observed that ‘great artists steal’, so I suppose we can forgive him.

The way in which Xanadu Next really distinguishes itself is not in its combat system, but in its exploration mechanics. When you set out from the town into the dangerous wilds, you will need ‘skeleton keys’ in order to open locked doors. It’s advisable to stock up on these keys before setting out; however the more you buy, the more expensive they become. The price of the keys can be lowered by selling the trader the raw materials require to produce the keys (monster bone). And so, there is an art to managing this intricate supply and demand chain, buying enough keys to get you through a venture to the next completion point (and sometimes you need double figures’ worth) but without putting yourself drastically out of pocket.

The key system is intriguing because it makes even simple exploration a more thoughtful exercise. If you under-supply, then you might go through a huge array of levels only to run out and not be able to progress: cue making your way back to Harlech Town for a re-supply. You will also need health potions, anti-venoms and much more to get you through a stage. Getting hit is nigh unavoidable. Arguably, this process does introduce a certain level of grinding to the gameplay. While grinding is normally a pet hate of mine, I found Xanadu Next’s system entrancing, sinking hours and hours into it in order to progress in the story as well as power up my character enough to wield the Zweihander. The act of unlocking new rooms and finding how acquiring certain inventory items will allow access to previously hidden/walled off areas is incredibly rewarding.

Coupled with its unique exploration mechanics and old-school combat are some truly crazy boss battles. The first of which, against a demonic tree Berilard resembling Ocarina of Time’s Deku Tree crossed with the Curse-Rotted Greatwood of Dark Souls 3, is one of the strangest and mystifying I have ever had the pleasure of fighting. I beat Berilard on the second try, but not without nail-biting tension and some serious thought. Overall it was an immensely satisfying encounter that genuinely surprised and instilled a modicum of awe. 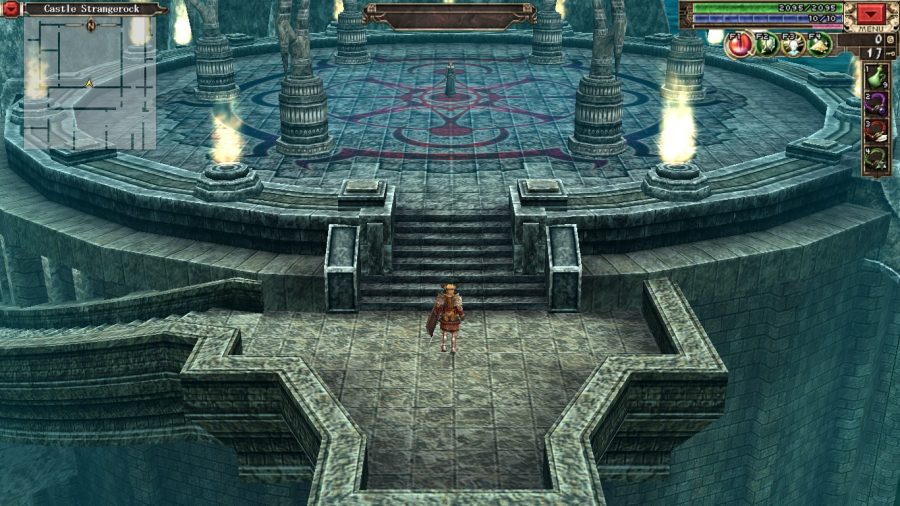 Xanadu Next is not perfect, however. There are issues with the controls. For example, your inventory has three tabs: one for items, one for passive skills and one for your active/offensive spells. In order to move between these three tabs you aren’t able to click on them, instead, you have to hover over the item tab (none of the others will work) and use the mouse wheel. This is cumbersome and took me quite a long time to figure out. There are also small sound issues. For me, the sound of the game only plays through USB speakers, not my PC’s in-built speakers or jack ear-phones. It might be different depending on your PC settings, but it is quite frustrating to not have that basic level of control over how you experience the game. Having said that, it is a relatively minor issue when you set it next to the glory that is the game’s soundtrack. Whether it is the ominous timbre of the Endless Maze soundtrack or the gentle rhythms of the Harlech Town theme, the music is a joy, as is the satisfying combat sounds (skeleton bone-crunches to make you shudder with delight).

Overall, Xanadu Next is a charming RPG title that seems to have sprung out of the past for new life. It reminds us of the old-school principles of gaming, with labyrinthine levels, a vast array of enemies including salamanders, minotaurs, lizardmen and more, and an off-beat lore centred around an epic English poem (interpreted in a Japanese way). This RPG is truly essential for anyone who is a fan of the Forgotten Realms RPG series, Darkstone, or Miyazaki’s work.

Xanadu Next is available on PC.