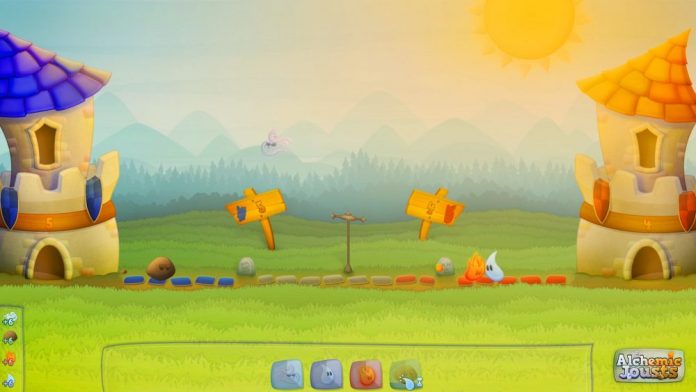 At first glance, Alchemic Jousts presents itself as a simple, colourful and easy-going castle defence strategy game; one that can lull your brain into a state of relaxation before jumping into a more demanding title. After spending a few hours with this quirky new title, all I can do is return to a cliché as old as time: looks can be deceiving.

Alchemic Jousts is the first release by Lunatic Pixels, a two-man indie studio based in Barcelona. Each level consists of two opposing castles: one your own and the other belonging to an evil enemy. As this world is obviously not big enough for both of these structures to co-exist, the player must try and destroy the other castle while defending their own.

With survival at stake, an arsenal of elemental creatures are at the player’s disposal. These well-animated balls of adorableness are unleashed in the general direction of the target to try and chip away at its health bar. For general matches, five hits are usually required to put them to the sword. Unfortunately, the opposing castle seems to possess their own collection of Captain Planet rings, as the same enemies are fired towards your stronghold. This leads to an often gruelling chess match to see which strategist can think far enough ahead to force their counterpart to their knees.

Using a seemingly straightforward rock-paper-scissors mechanic, where earth beats water, fire beats earth, and water beats fire, Alchemic Jousts is simple to grasp but hard to master. Besides the base elements, fusions can also be performed to create new skills that can provide an advantage in battle. With an impressive array of over 180 available skills to unlock, finding the right combination for each individual joust proves to be pivotal in determining one’s success rate. 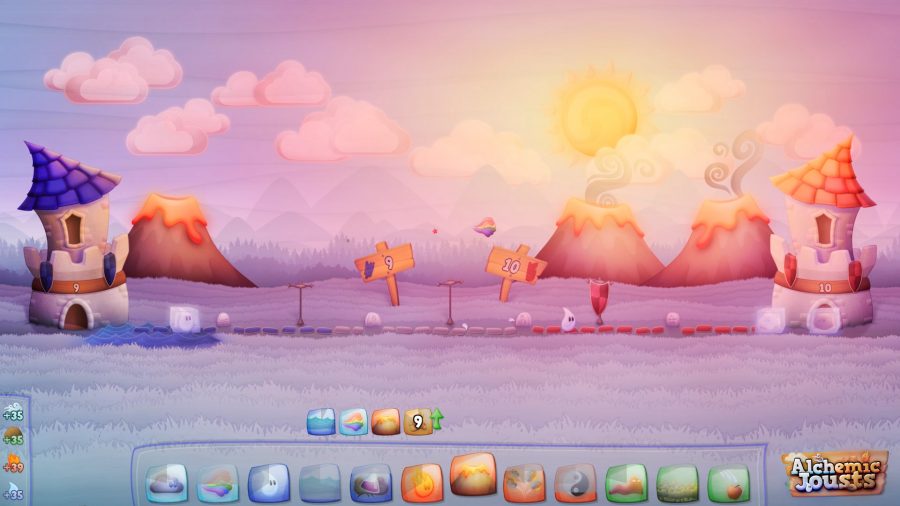 In every battle, the player equips a few skills to take alongside the three main elements. As the game makes use of a timer system, where sending out a single element will lock all other options for a short time, the real challenge is finding the right balance of offence/defence. This means that the way to success is not to take a gung-ho approach, but instead to try and outthink your foe to create an opening.

Besides a straightforward deathmatch, Alchemic Jousts presents a few other game modes to try out. For example, “Attack Mode” allows the player to go wild, as your castle is handed the power of invincibility, allowing the focus to be planted solely on getting hits. With a five-minute time limit, the goal is to see just how many blows can be landed before the clock hits zero. On the other side of the fence, “Endless Mode” puts the player on the defensive. Faced against an immune monstrosity, one must attempt to survive for as long as possible, to try and reach new heights of stubbornness against the impossible opponent.

For such a seemingly bare-bones title, Alchemic Jousts is sure packed to the brim with stuff to do. There is a huge amount of levels to play through, offering an always escalating sense of vulnerability, with each offering three difficulty levels (easy, medium and hard). The overwhelming quantity of skills to unlock leads to a genuinely addictive experience, as I found myself trying out new combinations to see what new tool of war I could create.

Having said all of the above, the issue comes down to the core gameplay. Is Alchemic Jousts actually fun to play? Well, the results are a bit of a mixed bag. The computer, especially on hard, is practically omnipotent. Carving out a chance to deliver that killer blow can not only be frustrating but downright impossible. The key is in the skills, but unlocking the right one can be a pretty tall ask as well. 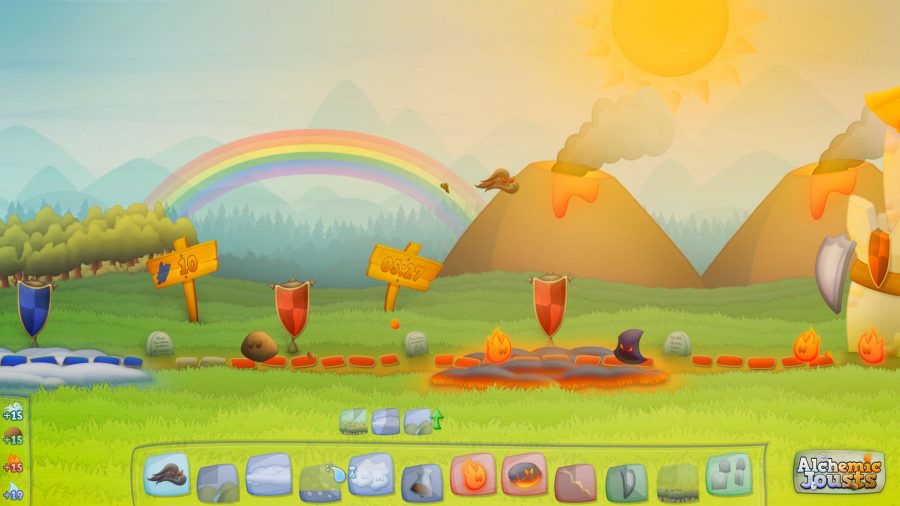 As one would expect, the core experience does not really change all that much. After a short while, every match will start to feel pretty repetitive. Although the separate modes provide some slight variation, it is hardly a big enough change to really get excited about. The controls also take a while to get used to (although there is an option to assign elements/skills to a particular button) and can lead to a few input errors, especially in the first few hours of gameplay.

Still, despite its faults, Alchemic Jousts is an enjoyable first entry by Lunatic Pixels. Built on a simple premise and gameplay mechanic, there is enough added on top to leave one coming back time and time again. It is by no means a perfect experience, and at a tad on the pricey side, but those looking for a quick strategy fix might find something to enjoy here.

Alchemic Jousts is available on PS4 and PC. We reviewed the PS4 version.