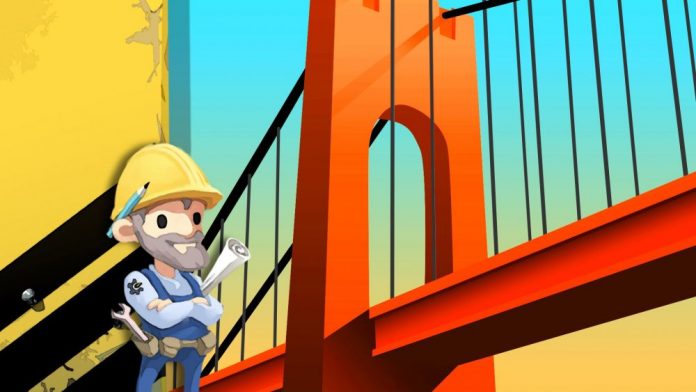 Bridge Constructor is a game in which, you guessed it: the player constructs bridges.

That’s pretty much all there is to say on the matter. While it can be charming in part, for me it focuses too much on simulation aspects, forgoing opportunities to add a little more lively chaos into the mix.

Bridge Constructor presents you with a series of technical challenges as you move across each island hub, fixing all the bridges destroyed in a sudden earthquake. Completing an island allows you to move onto the next one. There are different degrees of completion: the most basic being that ‘cars can now drive across all roads’. To get achievements and progress even further you will have to ensure trucks and even long-haul lorries can drive on your bridges too. There are diverse landscapes including canyons, rivers, gulches and pits, each offering different requirements and challenges. Some offer handy foundations which can be built upon for better support; others you will have to get more creative to find ways to make your bridge stay up. Each challenge has a set budget which prohibits you from unlimited building. There are four types of material which can be used: concrete (which can only be built on certain locations), wood, steel (stronger than wood but more expensive) and cable. In some scenarios you will only have access to one of these materials and in others you will have access to all four. Often the answer lies in utilising them in cohesion. And, of course, obeying the laws of physics.

As an educational game, Bridge Constructor is brilliant. I genuinely felt like I was learning something about architectural engineering, especially in the later stages where limited resources and challenging environments will test your creativity and ‘outside the box’ thinking. I got an achievement for failing 25 times in a row on one puzzling canyon, finally botch-jobbing it with a hideous steel counterweight system and a spider-web of cables. But entertaining as this is in the short term, after an hour (and five or six bridges), it becomes pretty dull. After four or more hours, your eyes longingly start to wander to the pile of unplayed titles by your TV.

The music stays the same throughout. The visuals hardly diversify. And no new mechanics are introduced. The creation process is actually pretty limited as you can only generate from fixed white-dots on the screen; I’m afraid you must cancel your plans for ludicrous Halo 3 Forge creations (slapdashed together with broken physics and dreams). Bridge Constructor is basically one puzzle after the next, almost like a series of brain teasers – the kind perpetually on sale at M&S – and while for some this will be enough, it just doesn’t satisfy me. 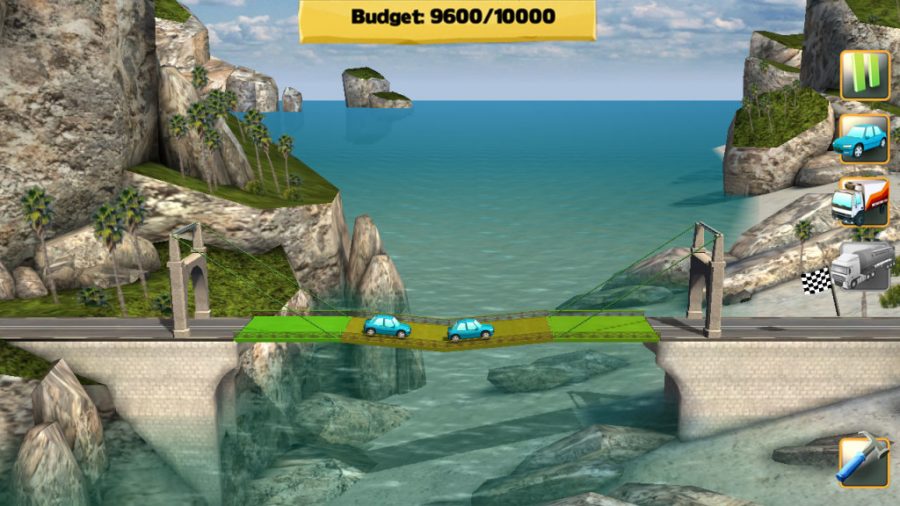 Perhaps the chief fault is that when you fail it’s not really that spectacular. Your bridge groans and falls down. Any cars or trucks on it also fall down, largely unperturbed by the failure (they hit the bottom of the canyon and keep driving). There are no explosions or magnificent moments of carnage on an outrageous scale. I sound like a Michael Bay fan, don’t I? But what I am really getting at is Bridge Constructor needs some levity, something to brighten it up and make it less like our daily work life. For example, when you ‘stress test’ your bridge, there are three weights of vehicle: car, truck and lorry. Why not add in level four, which is a giant monster scuttling over it (or even attacking it)? Or, why not have kamikaze cars that try and drive off the bridge so you have to make it suicide proof? Why not do any number of things to make it less like the kind of physics program a corporate business would use rather than a video-game people are supposed to unwind to. Entertainment is supposed to be just that: entertaining.

I accept that this is the simulator genre, which is a whole unique kettle of fish, and Bridge Constructor is not a piss-take like Surgeon Simulator, which deliberately exposes the lunacy of absolute realism; at the same time I can’t get the thought out of my head that life’s too short to play a game that is so, well, mundane. I guess what I’m saying is that for those of you who love bridges and hate monsters and explosions, Bridge Constructor is the one for you. For the rest of us, there’s Gears of War 4.

Bridge Constructor is available on PC, PS4 and Xbox One. We reviewed the Xbox One version.