Review Deponia in two words? Here we go: it’s alright. What? You want more? Well, if you insist…

Let’s kick this off with: “it’s better than you might think”.

At first blush, Deponia doesn’t seem like it’s going to offer much. It starts off with the hero, Rufus, planning his escape from the eponymous junk-filled planet and coming across, almost instantly, as a massive dick in the process. He’s self-centered, irascible, egomaniacal and… well… a dick. If you met Rufus in real life, there’s no way you’d want to spend any time with him. But, in Deponia, you’re stuck guiding him around for however long it takes for you to work through the game’s three main acts.

Fortunately, Deponia is – by and large – pretty funny. Sure, some of the jokes may only be a few rungs higher than, say, making farting noises by putting your hand in your armpit but they’re funny nonetheless, and there are shining moments of actual wit as well as your standard one-liners and longer gags that are set up over the course of several interactions and unfold with cringe-inducing inevitability. 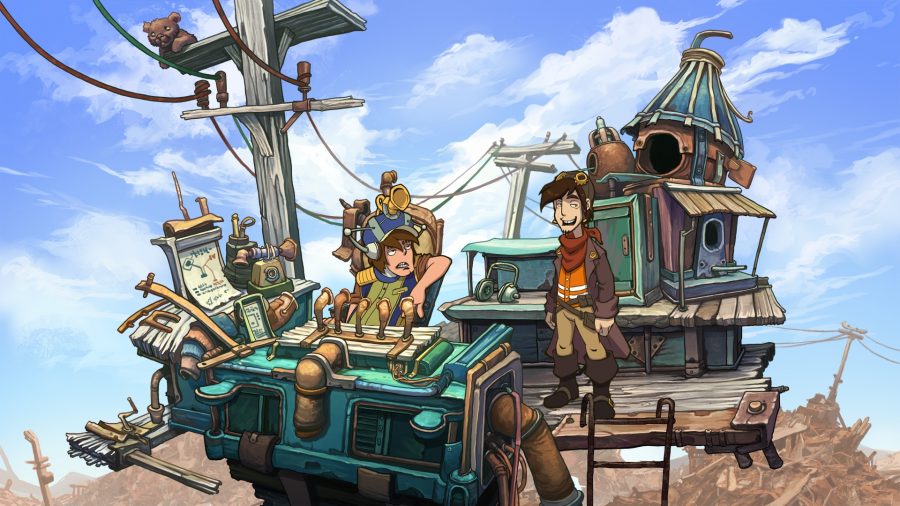 That being said, the visuals, dialogue, audio and music are all incredibly good – even if the music does, at times, outstay its welcome a little bit. The game’s design is easily its best feature and it really ties the world together with a wealth of well-crafted characters, interesting backgrounds and items that blend so seamlessly into them that you might miss them entirely.

Puzzle-wise, Deponia is pretty well decked out and there’s even a point in the first act where I had to start writing down everything I had to remember to do, lest I sit there for several agonising minutes furiously rubbing inventory items together in a futile attempt to clue myself in as to what I was supposed to be doing. Though I ended up doing that throughout anyway.

The puzzles are of varying difficulties and most actually end up being fairly well thought out and hinted at by the game. As with almost all point and click adventure games, though, there are some puzzles that are so obscure and poorly structured that it seems a wonder that the developers came up with it at all. For instance, you’re asked to trap a semi-sentient toothbrush early in act one – a semi-sentient toothbrush which is never explained nor referenced again. It’s an example of the developers needing an additional puzzle and coming up with something absurd that only makes sense at the time or, perhaps more likely, having a wacky idea and throwing it in there where it clearly doesn’t belong.

As I’ve already made clear, Deponia has its faults, but it has just about enough upside to cancel out most of them. Most of them, not all of them. There are yet more little bugbears that crawl out from between Deponia’s crass humour, pleasing visuals and wealth of puzzly goodness and it’s these that really bring home that second definition: “yeah, have a go but don’t expect too much”.

There are a couple of examples that immediately spring to mind and the first are the little mini games that Deponia occasionally makes you play in order to progress a puzzle. These games are nothing new to point and click adventures: they’re a little similar to insult swordfighting in Monkey Island, the thing with the anchors in Grim Fandango and swapping inventory items between Rincewind and the Luggage in Discworld. In them, you have to solve little self-contained puzzles by matching items, switching tracks or rotating lights on a board to achieve a specific result and progress the greater puzzle within which they’ve been placed.

The problem with the mini games is twofold. For starters, they can feel a little out of place in the main game or, it may be more reasonable to say that they seem a little forced and unnecessary when compared to other puzzles, like they’ve been put there because they needed to stretch out the playtime a bit. Which neatly ties into the second problem: they’re often just too difficult; a fact that has obviously not escaped Daedelic Entertainment as they added a ‘skip’ button so that players can just breeze past them if they wish. I’m not too proud to admit that I clicked it more than once (despite having beaten the first two Professor Layton games without spending more than ten hint coins altogether!).

The second reason that Deponia falls into the “don’t expect too much” camp is, in this release at any rate, the controls. Playing this on PS4 means that I got a total of three concurrent control methods to choose from, but they just don’t really play nicely together. 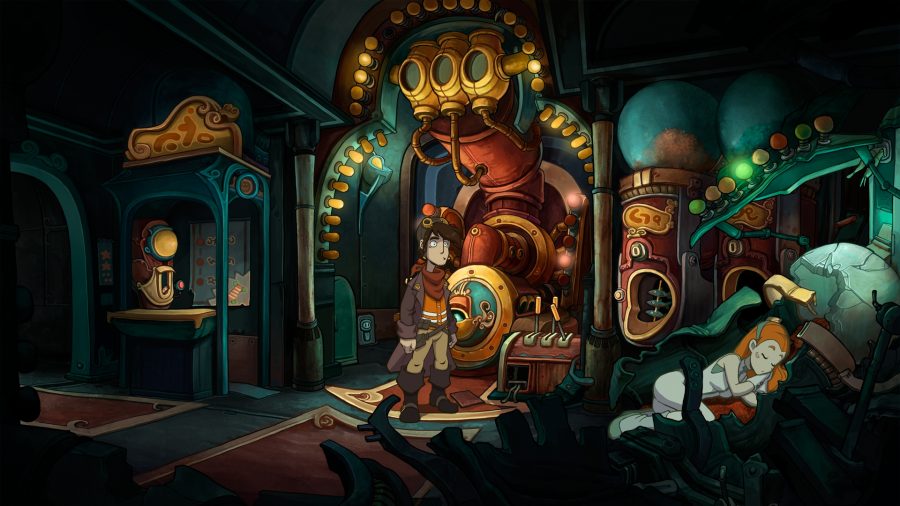 Should you choose to, you can control where Rufus moves with the left stick, you can use the right stick to move the mouse cursor or you can handily scroll through all interactable objects with a press of R1/L1. The real problem comes when you’re attempting to use more than one of those modes at a time. I had many, many moments where I’d be walking Rufus around (interactable objects are automatically highlighted when he gets near them) and trying to use the cursor as I would in any other point and click and I ended up choosing entirely the wrong object or person to interact with, leading to me either having to skip through a bunch of dialogue (it doesn’t matter how funny it is if you’ve heard it ten times already) or grit my teeth and listen to Rufus whine about not being able to do something for the umpteenth time that second.

Also, having the ability to flick through interactable objects with a button press makes the wonderfully seamless design work done on them almost entirely useless. Some (okay, almost all) point and click adventures incorporate elements of hidden object games in their scenes as it’s up to the player to mouse over everything that could, conceivably, be put to some use by the protagonist to find the thing that they need to progress. Taking that element away from the game speeds it up in some respects but, in others, it reduces an additional challenge that makes the player work harder for the payoff at the end.

Speaking of ends, let’s wrap this slightly longer than two-word review up with our last definition: “it’s alright, but…”.

Deponia is alright, but, all the while I was playing the game, I had this nagging feeling that something wasn’t quite right. There were some odd jokes in there, some strange dialogue, a couple of item descriptions and puzzle solutions that just felt out of place.

I’m still not 100% sure that I’ve nailed it down but I think it comes from the developers’ desperate need to break the fourth wall and some thinly veiled attempts at commentary on video game development and culture. Rufus constantly makes jokes about the games industry, there are quips and asides that obviously showcase his awareness of being in a video game, there are gags and setups, too, that make the most of the fact that this is a fictional setting while the story and other elements continue to try and convince you that this place is real. It’s not so much that the immersion gets broken; rather, the immersion is a rug that the game whips out from under your feet as often as it can – provided that there’s a laugh to be had when you fall on your arse. It’s not enough to kill all enjoyment of the game, far from it, but it is enough to drag that suspended disbelief right back down to the junk-planet that it, and Rufus, are desperate to pull away from.

So, yeah, Deponia is alright, however you want to take that. If you’re a fan of point and click adventures, then you’re certainly going to find something to like. There are plenty of great puzzles to get your teeth stuck into; it’s just a shame that the main character is such a douche and the controls aren’t up to scratch. The comedy will probably see you through, but just don’t expect to be blown away.

Deponia is available on PC and PS4. We reviewed the PS4 version.