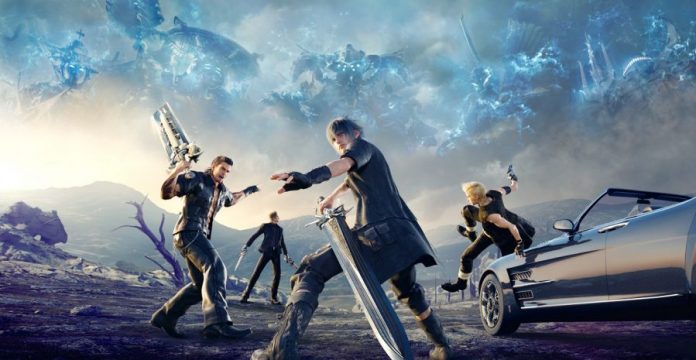 A game ten years in the making, living up to expectations was always going to be an uphill struggle for Final Fantasy XV.

Obviously it doesn’t; any game with that much of a build-up is always going to disappoint on some level. But it does somehow come closer than I ever imagined it would, despite exhibiting a great deal of bewildering and frustrating flaws. I suppose the best way to put it is that it’s at least better than Final Fantasy XIII, which should be enough to make most Final Fantasy fans happy.

I’m sure by now you’ve inadvertently seen enough of Final Fantasy XV’s protagonist, Noctis, and his band of friends-cum-Royal Guard, Gladiolus, Ignis and Prompto. The shoulders of these four characters bear the mighty weight of Final Fantasy XV, which for the most part amounts to a largely care-free road trip, and whilst they just about manage it, they leave a lot to be desired. All dressed in black, they wouldn’t look out of place cavorting as members of a screaming nu-metal band, and that’s the first of Final Fantasy XV’s problems; its main characters just aren’t that interesting. They grow on you somewhat throughout the journey, what with the troubles that befall them, but you’ll never remember them fondly like favourites such as Cloud, Yuna, or even Lightning.

Final Fantasy XV’s villains however, are strangely much more amicable. Whenever they’re on-screen they ooze personality and keep you on tenterhooks with their ambiguous motivations. They’re a more interesting looking bunch too, wearing varied, elegant and fanciful outfits that make them much more visually appealing than our dark quadruplet. The trouble is though, and this leads on to what is perhaps Final Fantasy XV’s biggest problem, is that they’re massively underused. Well, apart from the main villain who really comes into their own during the final third of the game.

Ask anyone what they like about Final Fantasy games and the chances are they’ll say the stories that they tell. It’s unfortunate then, that Final Fantasy XV’s story is told in such a way that makes it feel incomplete and entirely underwhelming. You can tell that there’s an epic tale in there waiting to be told, but you’re only subjected to the odd scene here and there, with you often left bewildered by important plot points that are glossed over or shaken off by just a couple of lines of dialogue. It makes it hard to care about its cast of characters, especially those who perhaps don’t get the amount of screen time they truly deserve, but it does just enough to keep you engaged until the very end. For those just wanting to experience the story and little else, that’ll be around 25 hours, but players who fully immerse themselves in the world of Final Fantasy XV could see that time at least doubled. 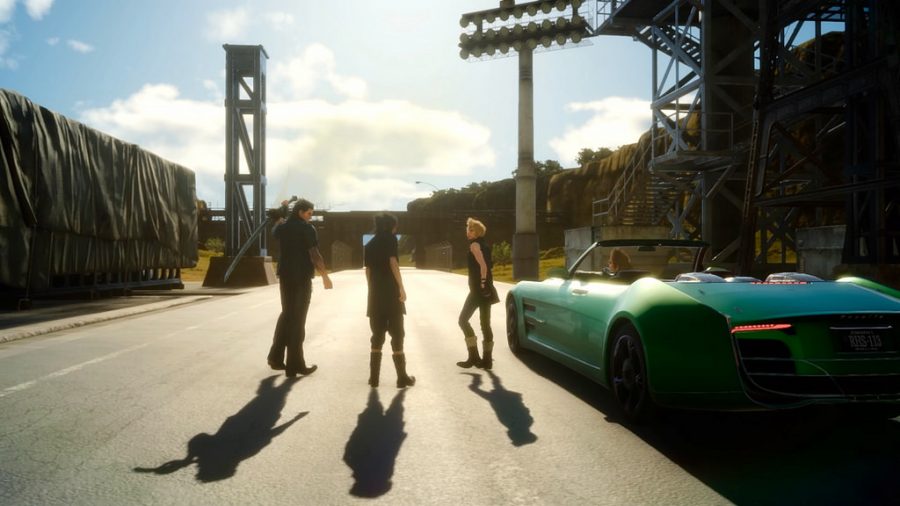 Sporting an open world to rival the likes of Skyrim in scale, it’s perhaps indicative of the times that Final Fantasy XV’s story isn’t quite as in-depth as past titles. Side-quests used to be just that; additional tasks to do on the side that offer a little diversion. In Final Fantasy XV however, they make up a majority of the game’s overall gameplay. It’s not such a bad thing; Final Fantasy XV’s world is dripping with detail and host to a varied range of locales that you can explore at your leisure by car, foot, chocobo, or with some work, the air. It’s expansive, realistic, and filled with things to see and do, meaning you’ll often happily choose to sideline the main story in favour of completing side-quests, hunts or any other opportunities that come your way. Sure, a lot of Final Fantasy XV’s additional content is repetitive filler, but the wonderful nature of its world and the fact that you’re in no way obliged to do any of it if you wish rarely makes it feel like chore.

As you’d expect, combat plays a major role in Final Fantasy XV, and despite having some troublesome issues it’s thoroughly engaging and rather enjoyable. Placing you in control of Noctis alone, combat feels akin to that of an MMO in which you simply hold a button to attack. Giving the combat some depth however, is the ability to dodge attacks and take cover behind objects to replenish HP, as well as the odd opportunity to parry a blow and launch a counter-attack with a basic quick time event. Noctis also has a nifty trick up his sleeve in that he can warp around the environment by utilising his warp blade, reaching safe points with ease and striking enemies from afar with amplified force.

When a little extra oomph is needed in combat, Final Fantasy XV has a few options available to you. Magic spells can be crafted and equipped to characters for use, requiring resources that are absorbed from deposits or drained from enemies. With a little know-how they can be utterly devastating, but unfortunately the game does a terrible job of explaining the intricacies of its magic crafting system. Alternatively, for the added edge when needed, activating Noctis’ Armiger ability grants him a welcome boost to his stats which can see him make short work of most enemies. Both are child’s play when compared to the rare occasions that you can initiate a summon though. Epic in scale, aside from looking absolutely spectacular, they truly decimate any enemies in their path. 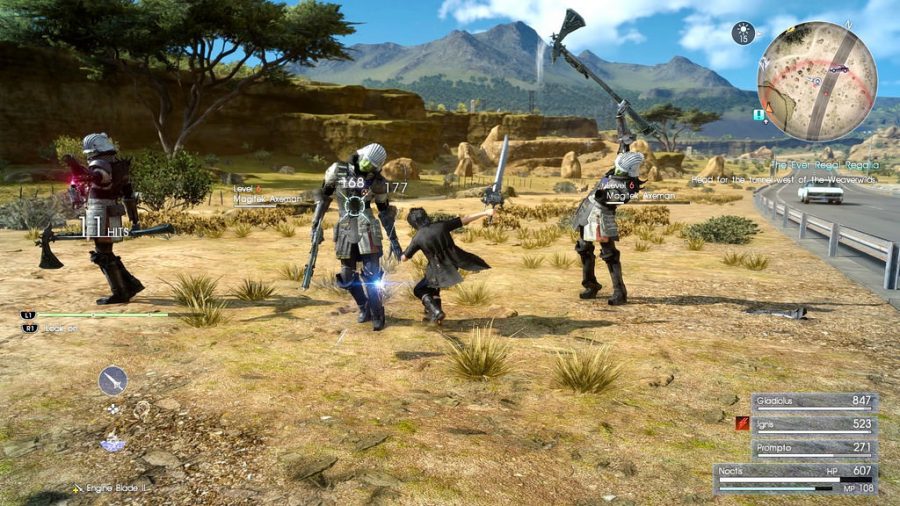 It’s just a shame that combat is marred with numerous issues that often make it more than a little frustrating. Not being able to issue direct commands to your teammates during battle, for instance, means that combat often feels like an all-out free for all. You can sparingly instruct each of them to use a pre-set ability, but being able to determine where they move and how they fight would have been much more welcome. The issue is even more troublesome when fighting large groups of enemies, as the action can get too hectic to even fully comprehend what is going on due to a chaotic melee of bodies all charging in to attack.

Another irritation is that enemy levels can often vary greatly during a quest. One quest, for example, had enemy levels ranging from 16 to 51, meaning that initially it was a walk in the park for my level 35 characters but then became an arduous struggle in which my healing supplies were quickly depleted. Undoubtedly the main problem with Final Fantasy XV’s combat though, is its camera, which at times is utterly useless. In open spaces it isn’t too bad, though perhaps a little unwieldy due to the games poor lock-on system, but the moment combat takes place in an area that’s more enclosed or full of obstacles it seems to actively work against you, obscuring your view of the action or getting stuck.

In spite of all of Final Fantasy XV’s story and combat problems though, there’s something about it that’s rather compelling. It’s unique; different. It has a whole load of little quirks and systems that don’t amount to much on their own, but as a whole give the game a great deal of charm – like Noctis’ fishing endeavours and Prompto’s penchant for taking photographs. It also looks and sounds absolutely stunning, absorbing you into the action like a Final Fantasy game should. It may be a little cringey, but the proclamation that it’s “A Final Fantasy for fans and first timers” when you boot up the game is indeed true. It’s accessible for those new to the series, but has enough nods and throwbacks to past games to put a smile of any Final Fantasy fan’s face.

To sum up then, Final Fantasy XV is by no means perfect – in fact it’s far from it – but it’s hard to not be enraptured by it. It falters in a few key areas but it has its heart in the right place, making it hard to bear a long term grudge against it. When it’s at its best, generally during the latter third of the game, the results are often phenomenal. At its worst, you’ll wonder how it can pass as a Final Fantasy game. On the whole though, the good far outweighs the bad, making Final Fantasy XV a flawed but essential title for fans of the long-running series.

Final Fantasy XV is available on PS4 and Xbox One. We played the PS4 version for this review.