For a lot of gamers my age, some of our early gaming memories are from arcades.

Popular games around that time were rail shooters and shooting galleries. Logically, they both have a place in VR. With that, however, comes repetition, and Pixel Gear is no different. While the gameplay has little variation, it is smooth and devoid of issues. Without the support of interesting additions, however, Pixel Gear is more of the same over and over. Thankfully, at its core there is heart and soul.

Virtual reality is going to be an arresting experience for some time. Each experience, whether it is grandiose and expansive or small and limited, offers something you’ve probably never done before in terms of immersion and sensation. Excitement isn’t what comes over you in Pixel Gear, but what it does offer is one of the most polished – albeit shortest – PSVR experiences available. Engage in wave-based gallery shooting across three different maps and four different difficulties. Though the game may leave you wanting more, what is there is fun, simple, and well created. If you’re looking for something fun and simple on PSVR, Pixel Gear might be the answer you need.

Getting a hang of the mechanics of Pixel Gear is effortless. As a matter of fact, the aiming/shooting mechanic in the game is what sets it apart, wonderfully, from others. Instead of holding the PS4 move controller horizontally, you hold it vertically, moving it side to side to aim. This alleviates a lot of stress on your arm, and actually makes it far easier to aim and be successful in the game. Your aiming and shooting will guide you through six waves, per level: five enemy waves, followed by a boss wave. On lower difficulties, enemies never congregate enough to be a problem, and bosses, after you figure out their mechanic (it’s easy), fall just as effortlessly. If you play on any difficulty outside of ‘Crazy’, you’ll never feel overwhelmed. The difficulty curve is gradual and fair, but not too challenging. 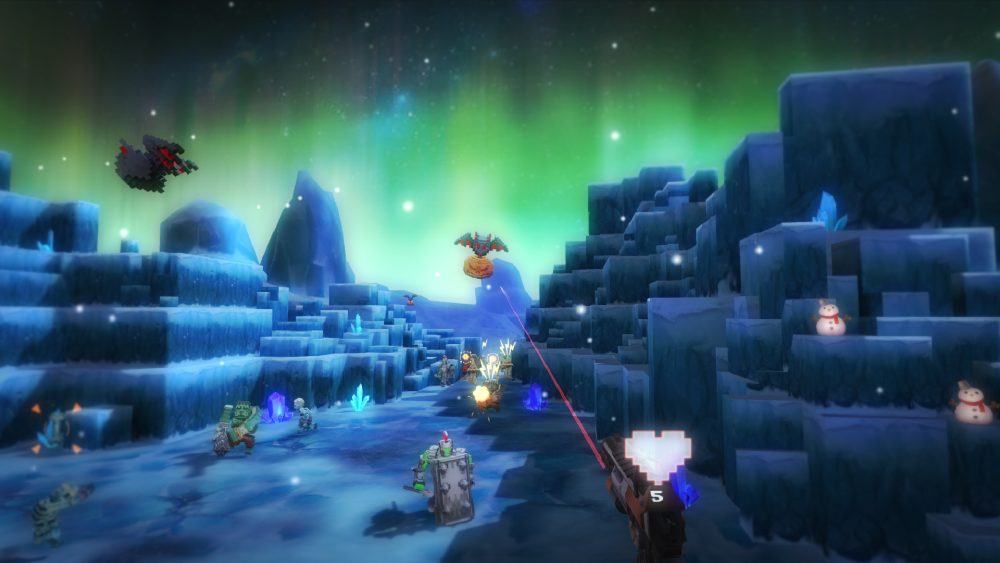 Your galleries consist of a forest area, a castle, and a winter wonderland. From the first to the last, you’ll shoot down bats, skeletons, ogres, mages, shielded knights, and ghosts. Every wave, minus the boss wave, ends with a session of ghosts and angels. Avoid angels, and target the ghosts holding the coins. Between waves, those coins allow you to purchase certain weapons and upgrades to ease your journey. No upgrade worthy of your money can be bought after one wave, unless you pick off every coin ghost, so listen to your parents and save. Having the sub-machine gun for boss waves is, well, kind of necessary – and secret easy mode. The sniper rifle is… nauseating. You actually have to pull the move controller towards your face until you can see down the scope while simultaneously noticing how shaky your hands are. It’s rough.

The worlds in Pixel Gear are lush and vibrant. Although the graphics are done in a retro, Minecraft-ish style, they shimmer as one of the better looking PSVR titles. The sounds and the colors pop and are at points the shining stars of the show. The retro tuned music that follows you along brings a great flavour to the old-school shooting gallery approach to the game. The only downside is there isn’t much meat to the game around the aesthetics, as each six wave adventure will only last about 20 to 25 minutes. But what Pixel Gear lacks in depth and length, it makes up for in fluidity, simplicity, and fun. Although my time with it – all three levels on ‘Crazy’ mode – was short, it was one of the better PSVR experiences I’ve had. It succeeds in not feeling like a demo game.

After the smoke clears from your trusty pistol, Pixel Gear may leave you wanting. Although enemies can throw objects and shoot at you, it never feels frantic. It is, even on higher difficulties, somewhat relaxing. The only issue is on the later maps, you’ll occasionally get hit from out of nowhere, only to realise a spawn area that is way out of sight. Audio cues on enemy spawns aren’t great, but sound in general is nice. A leisurely stroll in the ol’ shooting gallery is what makes Pixel Gear fantastic. It won’t break your bank, or your heart, because it delivers exactly what it says it will. And hey, apparently multiplayer is around the corner.

Pixel Gear is available on PS4.