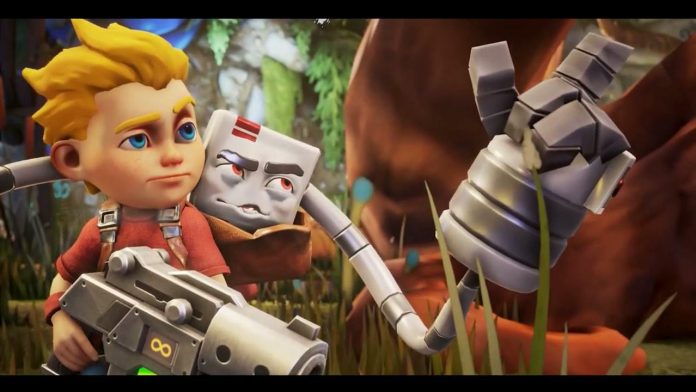 Nostalgia is a powerful feeling.

Remembering the good old days will put a smile on the faces of even the grumpiest old men. Experiences from our childhood seem impossible to reproduce in our adult lives. When a product is inspired by memories from our youth, nostalgia alone is enough to make us want to investigate. Rad Rogers: World One takes mechanics from the best platformers of the 90s and mixes them with impressive modern graphics and creates a solid prototype for worlds to come.

Rad Rodgers: World One stars a young boy named Rad who is very fond of video games and quite averse to school and bedtimes. One night, Rad notices something weird is going on with his television. Upon investigating, he’s teleported into a video game dimension and is greeted by his now sentient gaming console, named Dusty. After some funny back and forth, Dusty tells Rad that the Elder Tree has become corrupted, and they need to save her. After this first cutscene, there isn’t much in the way of story until the final boss fight.

The base gameplay of Rad Rodgers is nothing new. It’s your standard platformer with shooting mechanics. The player can also use Dusty’s bashing ability, though it’s easy to beat the game without ever thinking of using anything but your gun. The player has multiple hearts, and other than the rare action sequence, there isn’t anything that will kill the player in one shot.

Each level requires that you find four Exit Chunks before you will be able to open the door. For the most part, the levels are designed in a way that they feel open, but you’ll never feel lost. Rad Rodgers: World One puts a focus on collectibles and completionism: every level has a set number of gems, enemies, secret areas, and a Lionheart piece to find. It would be nice if on future playthroughs, objects you’d already found were greyed out, so the player would know they had found them previously. 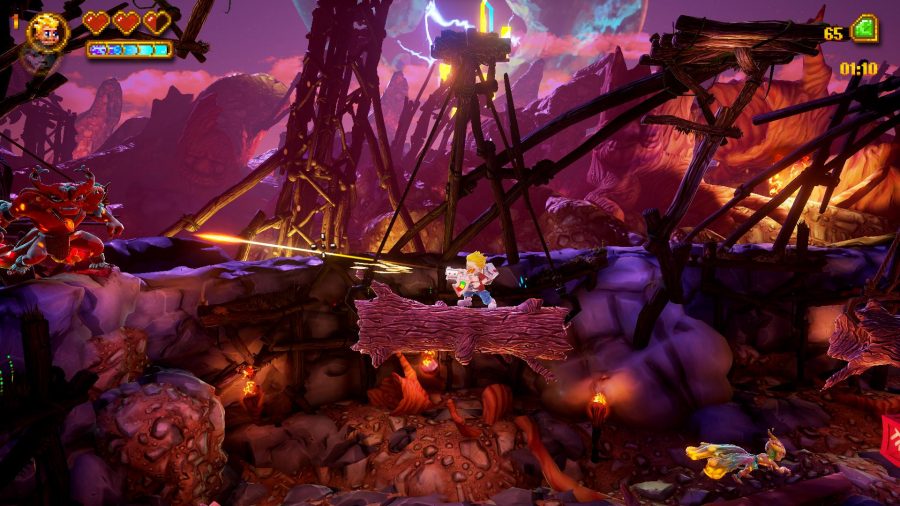 The artistic vision of Rad Rodgers: World One is where the game really shines. The game is gorgeous. It reminds me of Trine, which is a series known for its beauty, so that’s saying a lot. Every level has a completely different theme, and feels like an entirely new area. This goes doubly for the soundtrack, which features a new song in every level. There is even a preview of the songs on each node of the world map, which is a nice touch. If games were rated strictly on audio and visuals, then Rad Rodgers would be a ten out of ten. Unfortunately, the gameplay itself doesn’t do quite enough to live up to the same standards.

Not including the boss, there are only four different enemies in the game. This isn’t a scenario where there are four enemy types, but a plethora of different characteristics. There are simply only four different types of baddies in the game. Despite not having many different enemies in the game, the ones that did make it in are rather unintelligent. In most cases, the enemies will be stun-locked from being shot. Your gun has infinite range and unlimited ammo, which generally results in enemies dying far away, and leaving the player unharmed and unchallenged.

While exploring the world, the player will occasionally encounter an obstacle they can’t progress past. After a funny quip from Dusty about lazy developers or bugs, the player will be transported to the Pixelverse. The Pixelverse locations consist of simple path-following and dodging gameplay, while trying to find the hidden objective. None of the Pixelverse puzzles are particularly challenging or enjoyable. Hopefully this mechanic will get a rework in future worlds of Rad Rodgers.

The final boss fight is all that’s left to talk about. Get ready, because the boss fight is a big step up in difficulty from the rest of the game. Like most final encounters, the boss fight is divided into multiple stages. There is even a checkpoint in the middle, which is nice, because it can be a long affair. Overall the boss is a fun experience – challenging, skill-testing, and mean – but the ending left something of a sour taste in my mouth. As mentioned earlier, the Pixelverse sections of the game are the weak point and the boss has a couple of them. The problem is that they introduce a new mechanic without explaining how it works, and it’s one of those rare one-shot-death scenarios. It’s like being thrown into a pool without knowing how to swim; you’re going to drown a few times before you learn. 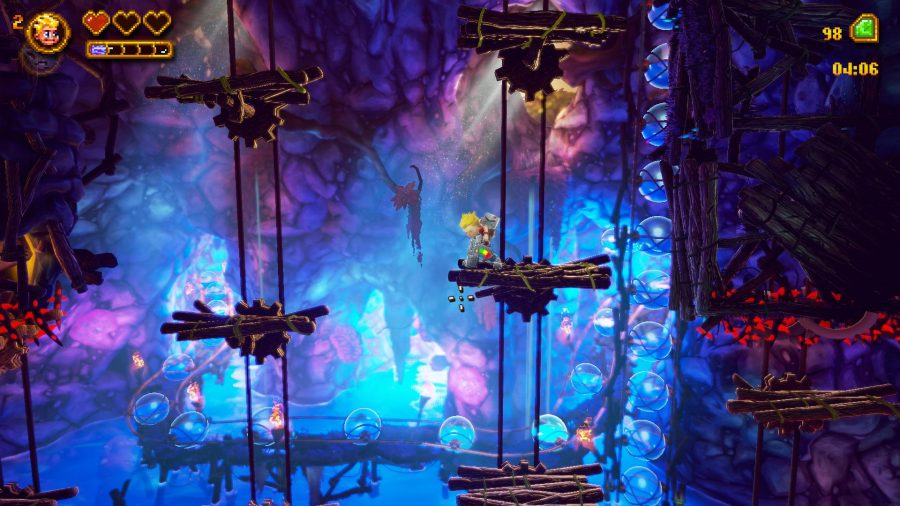 As a whole, Rad Rodgers: World One is a pretty solid platformer. The game doesn’t really do anything new, but it does a lot of things really well. If you focus on just beating the story, it’ll be a short two- to three-hour experience. By modern standards, it feels like the price tag of £8.99 is a little steep for such a short game, but it does focus on collectibles, so if you’re into that sort of thing, this game has a lot more gameplay to offer. As the credits say, Rad will return, so the developers have a lot of time and feedback to work with for World Two. The series has a lot of potential, so keep your eyes out for updates from the team at Interceptor Entertainment.

Rad Rodgers: World One is available on PC.