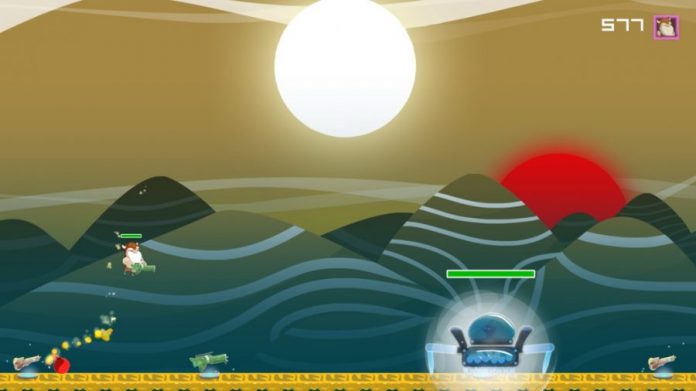 WinKings (a play on Vikings) is an arena shooter with terrific visuals and a Nordic soundtrack to die for. But the promising art style coupled with only decent gameplay quickly leads to burnout. It leaves you crying out for more – but you still won’t complain about the time spent with it.

In the faraway edges of the galaxy, there are four worlds. These four worlds circle the “big star”… or something along those lines. The key to power is some sort of crown. Four heroes, one from each planet, fight for control of this crown. That is the story as far as I can make out. All I can confidently tell you is that mayhem breaks out as you play as one of these four heroes in a 2D arena shooter called WinKings.

The first thing that will jump out at you while playing WinKings is the soundtrack. This is a game that blasts you with some proper Scandinavian-inspired tunes right off the bat; a sort of runic sea-shanty hits you and tells you that this is a game that has an intense theme and delivers it well. In fact, every tune that you hear throughout this arcade style arena-shooter is perfectly crafted and gets you in the mood to go and destroy everything around you.

To accompany this strong audio display is an equally as great cartoon visuals that have some real heart. It doesn’t go the easy route of pixel visuals though; no, this game knows it wants to look stunning and sound stunning – and it most definitely does. Each character has its own unique look and style that makes them easily identifiable and great to look at. Even if they are a bit stereotypical, the over-exaggerated art style really plays into the fact that this is a Viking-themed outer-space 2D fighting arena. And that’s clearly not something you see every day. 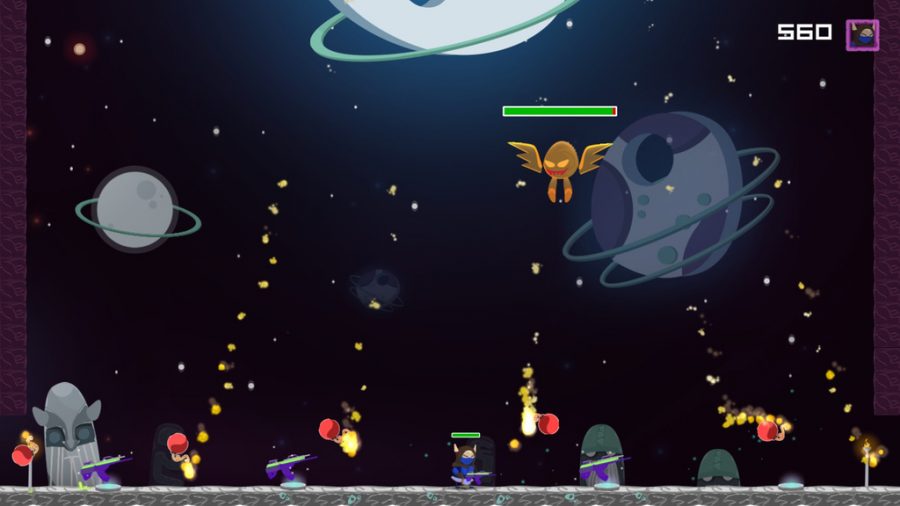 The gameplay of WinKings itself unfortunately doesn’t show such a tour de force as the audio-visual display. The controls work fairly simply and easily, however – it’s easy to pick up and play whether you’re using a gamepad or mouse and keyboard. You don’t feel any lag between the button and the action and that is very important for these sort of games. The disappointing fact is that there just isn’t too much to do. What little there is is great, but it just leaves you wanting more.

You play as one of the four characters and jump around with a melee weapon fashioned to your look. The melee weapon, however, should be your last resort: you want to grab the spawn-able guns that scatter the arenas. Each gun is fairly well designed and unique, with great animations and a realistic feel as you wield them. The flamethrower, for example, has a cool-looking flame that you use to bun your opponents. The huge machine gun even has you jolt back slightly as you shoot it.

In the versus multiplayer this all fits in well, and scrapping about, fighting for the best weapons becomes tactical and manic fun. It also instils a level of “WTF” that you need to make an arena shooter enjoyable. Each match is quick-paced and crazy, but still requires some “git gud” to win any match. The customisable arena, the wonderful stages and the exotic weapons are good fun with friends but after a couple of hours it can start to dwindle in excitement and becomes a bit repetitive.

WinKings’ campaign mode, whether in solo or co-op, unfortunately isn’t as fun as the versus-multiplayer . The animations of the enemies do not have nearly as much charm, with some of them being fairly ugly and unoriginal. This is in stark contrast to the playable characters. The gameplay that revolved around racing to grab the best weapon or improvising some on-the-spot tactics seems to fade when you are on the same team. It’s still rather entertaining with friends, but the experience is nowhere near as strong. When it comes to the campaign mode for single player, I do not recommend it at all. Without a friend tagging along for the ride, it’s pretty uninspired and monotonous.

Overall, you want to be playing WinKings for the versus-multiplayer. It is the best feature and what the game tailors to the most. The stunning visuals and audio give you a pleasant experience, and the gameplay is very much suited to playing casually with friends. You will be left wanting more, but I do not recommend going to the single player to get your fill. With all this in mind, I don’t think anyone will be disappointed with WinKings but just keep in mind that you might just burn through it quickly.

WinKings is available on PC.