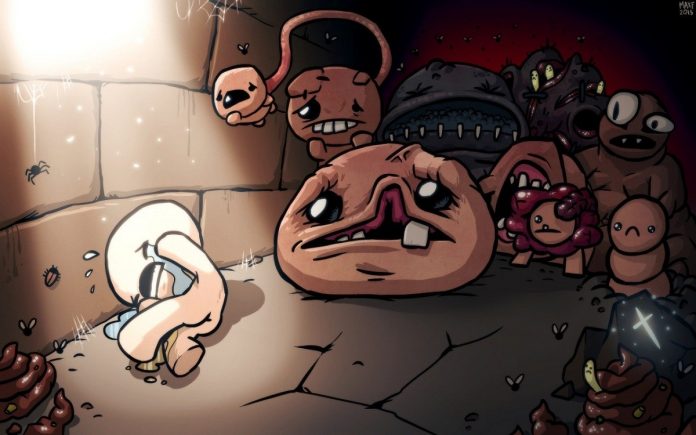 Having dived into The Binding of Isaac‘s latest expansion, Afterbirth+, for several hours, I’ve still only scratched the surface.

That’s the very issue a lot of people will have with the new content: it’ll be a while until they actually see the majority of it in action. The previous expansions felt far more substantial; so substantial that I’m still discovering new items and encountering new scenarios to this day. For those who really have exhausted everything The Binding of Isaac has had to offer so far, then this expansion might just do enough to sate your disgusting appetite for poo and tears. Although, if you haven’t played for a straight one million hours and unlocked everything there is to see, then Afterbirth+ is more of a ‘passive buff’; there are three or four overt changes, but most stuff will only emerge at the mercy of RNG.

Take Apollyon: a new character with cute little wings that don’t quite counterbalance the unsettling dead eyes. Unfortunately he’s not an overly exciting addition to the roster. He still fires generic tears and doesn’t stand out from the weird and wonderful crowd. His uniqueness lies in the starting item he’s been given: the Void. It requires a substantial charge, but once activated, it allows you to destroy passive or active items in the area to absorb certain stats. So if you destroy an active item it’ll gain the ability of that item, or if you destroy a passive one, then you’ll be granted with some juicy stat increases. It’s a cool concept, but as a player I relish the wacky powers I receive upon stumbling into an item I know, or don’t recognise. The Void quite literally sucks the fun away from this. Especially when there’s a bunch of new trinkets and assorted goodies to try out.

One of my most successful runs saw me handily acquire ‘The Shard of Glass’ which caused me to ‘spill my guts’ upon taking a hit, producing hearts to regenerate more health, and bleed profusely, coating the floors with my slick, acidic hemoglobin. Couple this with the ‘Apple!’ that upped the intensity of my tears both in rate of fire, but also in chance to fling a whirling razor blade at enemies to deal stupendous damage. If there’s one thing Afterbirth+ is guaranteed to nail, it’s the plethora of outlandish augmentations squeezed into the already bursting catalogue from hell. 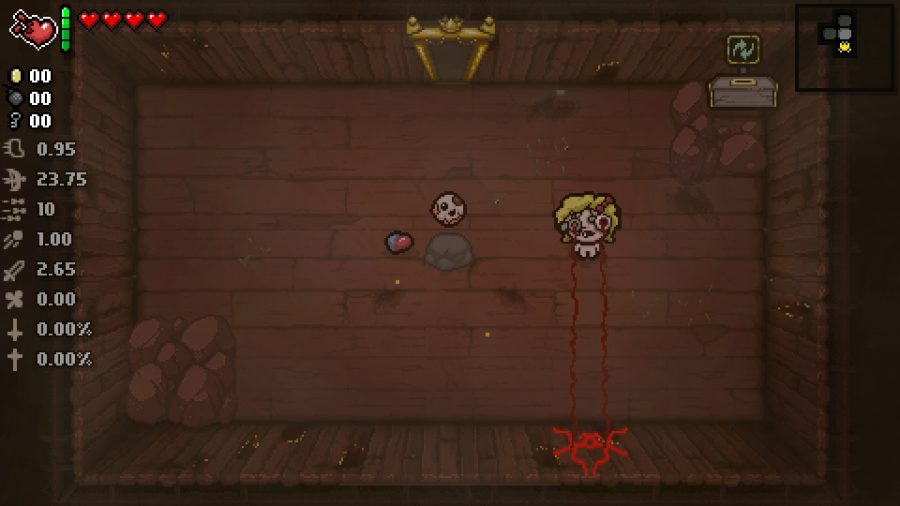 Another immediately obvious extra is the new ‘Greedier mode’. It’s little brother ‘Greed mode’ offered a new take on Binding of Isaac‘s main ‘story’ and map navigation. Rather than roaming a randomly generated map and wading your way through rooms of hideous abominations that spew bile, excrete everywhere and cake floors in blood in an attempt to find the boss and dive deeper into Mom’s Womb and beyond (shudder), Greed mode tasked you with a seemingly simple proposition: you’ve got everything you need nearby (shop and locked items), all you need to do is hold out in this one room. As the clock ticks down, more enemies spawn at certain intervals alongside some cash you can spend at the shop once the waves end. However, you can run over a spiked button and in return for some dastardly damage, pause the timer for a much needed breather – either to spend cash, or survive and press the button again to commence the carnage.

Greed mode is already at a difficulty that could induce a quick cracking of the keyboard, but Greedier could reduce a grown man to a wailing, sniffling mess. It’s absurdly difficult, to the point where I’ve truly attempted to spend some quality time trying to progress, but I’ve found it too taxing. Tougher enemies spawn at a quicker rate and it’s not long before you’re completely swarmed and overwhelmed. Granted, there’s a new boss and there’s a chance you’re able to sample the new items and face some new enemies, but it’s almost certainly end-game content that’s somewhat forgettable. Nice to have it around, but hardly necessary. It would’ve been more welcome to have a rework of the original mode, adding a few more layers instead of upping difficulty. Why not bolster it with more secrets, gambles and bosses in a similar fashion to Rebirth’s injection of ‘stuff’ to the story mode?

The Binding of Isaac: Afterbirth+ does add surprisingly creative ghoulies, however. Apollyon isn’t the only one who wields a Void; certain rooms might have their own, warping a generous selection of baddies into your domain. Tanky spiderlings that fire off homing cannon balls, grotesque wall-climbers that stalk you with protruding tendrils and cute mini-Monstros that bounce around and spout saliva in big, smiley gushes. Those of the new bosses I’ve encountered have insane amounts of firepower and are an absolute nightmare to battle against, striking a balance between nail-biting tension, revulsion and frustration.

You can view these nasties too in the new Bestiary which shows the number of times an enemy has been encountered, how much health it has, how much damage it has dealt to you, how many times it’s been killed, and how many times it has murdered you. From a tactical standpoint it might have some value but there’s no smidgen of lore. It’s impeccable ancestor, the famed Pokédex, gets it right through interesting descriptions that expand our knowledge of the cutesy Pokémon universe, but here, there’s no incentive to look up a new monstrosity to learn more about them. It’s a shame this initial creativity didn’t extend to something that should’ve be an interesting time sink and it’s a missed opportunity for the developers to draw us further into Isaac’s mind-boggling world. 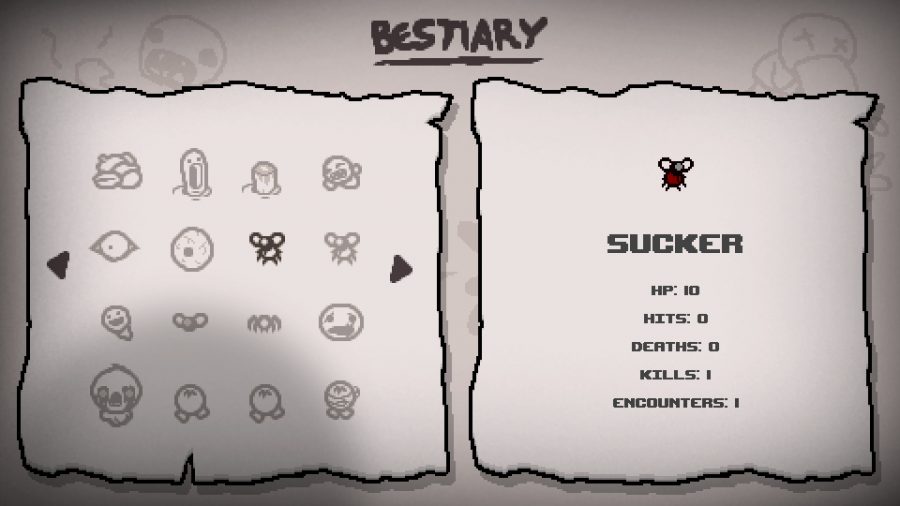 With official mod support, Afterbirth+ hands the reins over to the players and gives those familiar with the Lua programming language a chance to mess about with The Binding of Isaac’s wretched setting and upload their creations to the Steam Workshop. Apparently there’s even talk of the developers introducing a standout mod each month, allowing the community to make their mark in game and begin to shape the future of Isaac – Afterbirth indeed, eh? Perhaps this is actually the most exciting aspect of the expansion: a chance to bolster longevity through the creativity of a modding community that is proven to produce some startling results at times and breathe new life into a game that’s beginning to run out of ways to innovate.

That’s how I see The Binding of Isaac: Afterbirth+: as a final smattering of content latched onto the end of The Binding of Isaac, almost a final spurt of modes, enemies, bosses and items with modding support as the developers begin to splutter. It completes the package, and in that respect purchasing it will give you the definitive Isaac experience. But I can’t help but feel that it’s overpriced. A safe tack on to a game that’s finally rounded off, yet somewhat exhausted.

The Binding of Isaac: Afterbirth+ is available on PC.