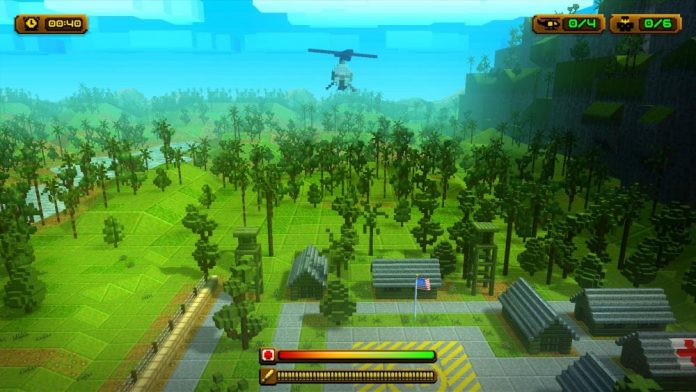 Over the years there have been a lot of video games and movies about the Vietnam War.

The one element that almost all the media have in common, is the brutality. War is violent, bloody, horrific, and certainly no place for children – which is why it’s so interesting that Dustoff Heli Rescue, based in the Vietnam war, has been made kid-friendly.

Dustoff Heli Rescue is a simple game with no real need for a storyline. Each mission gives a brief description of what the player needs to do, whether it’s searching for missing troops, freeing captured troops, or retrieving stolen equipment, but there are no named characters, specific locations, or really any end to the story. The game features an art style that is a mix of voxel models with Minecraft-like terrain. It’s a very simple style. Though some people aren’t a fan of the voxel look, it does fit the feel of the game well.

It’s impressive how much the style can capture the feeling of the Vietnam seen in other games and movies. Flooded regions, thick jungle, cave systems, and napalmed forests are all present in Dustoff Heli Rescue. They all feel alive, despite the non-realistic blocks they’re made up of. The sound effects and voice-overs aren’t done as nicely as the graphics. You’ll find yourself listening to the same couple of songs over and over again. Unlike normal war dialogue, there is no swearing in the game. Along with the blood-free art style, it continues to fit the theme of child friendly.

The core of the game is enjoyable: dodging enemy fire, trying to land in harsh weather, weaving through narrow cave systems, and getting your men home safe all manage to keep you hooked for a time. Unfortunately, the appeal wears off well before you complete the last mission. Fighting a small army on the ground, dodging missiles, bullets, and rockets can be exciting and a real challenge, but it’s incredibly boring to take long trips back to base to regain health. It fits the feel of Vietnam to scour the jungles looking for that one little green beret soldier, though it soon becomes tedious and tiresome after a few minutes of searching. There really just needed to be a bit more variety and polish in the game to take it to that next level. 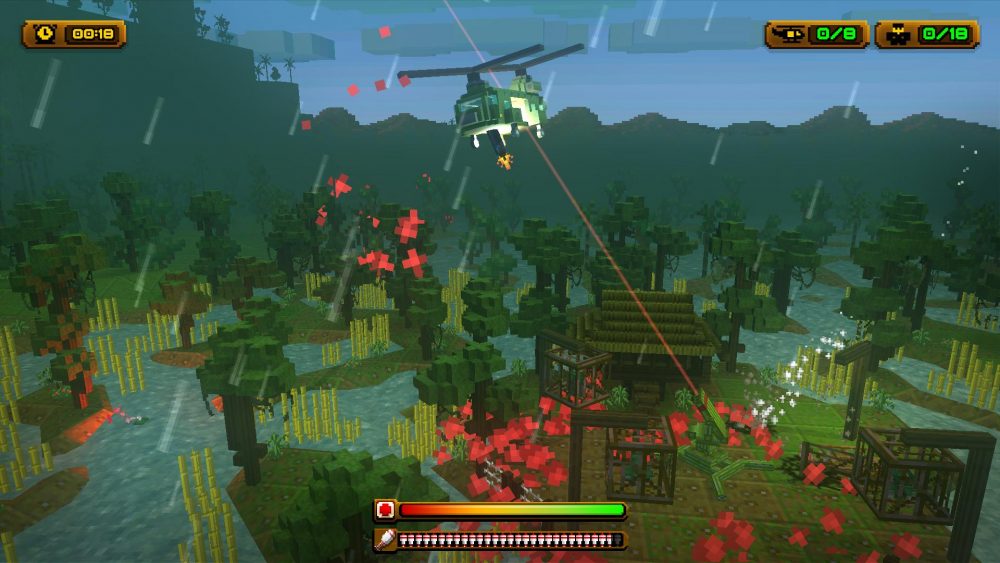 To understand why the controls are they way they are, it must be pointed out that Dustoff Heli Rescue is a mobile port, and it shows. While controlling the helicopter, the default controls are fine; hold Left and Right to ascend, don’t hold anything to descend, hold one direction to go in that direction. They’re more than enough to control the helicopter through wide open spaces or tight enclosures.

It’s the menu controls that are truly abysmal and sometimes non-existent, however. With a controller, the pause button is Select, unlike every other game, which use Start. The keyboard is incredibly inconsistent. When the controller is plugged in, some keys still work, but there is no way to pause the game using the keyboard. You can navigate up and down in menus using the arrow keys but you can’t navigate left and right. This makes it impossible to select certain options with keyboard alone.

There is also the possibility to switch the helicopter controls and/or the gun controls from automatic to manual. Controlling the copter becomes much more unwieldy, but the gun controls can allow for much greater accuracy and efficiency. However, you can only use manual gun controls with mouse and keyboard. Still, it’s a nice option to have should you want to give an otherwise pretty simple game a greater level of difficulty.

The 25 missions themselves are very simple and fall into two main categories: troop rescue and equipment retrieval. The troop rescue can be slightly different depending on the mission. Sometimes the troops are just lost; sometimes they are in a convoy that the player must destroy; and other times the troops are held in prison camps. It’s important to note that all missions put the focus on saving allied troops and not on killing enemies. In fact, enemies are never actually killed in the game. If a base is blown up, you’ll see enemy soldiers running away unscathed.

I really can’t re-state enough how impressed I am with a game about the Vietnam war being able to be E for Everyone. Whether it’s the art style, lack of killing, or simplicity of controls, Dustoff Heli Rescue has some nice features. However, as a whole ,there isn’t much to the core gameplay in terms of variety or depth. The PC controls and UI make it clear that the Steam version is just a quick mobile port. At $4, Dustoff Heli Rescue is too expensive for an experience that can be replicated for free on mobile.