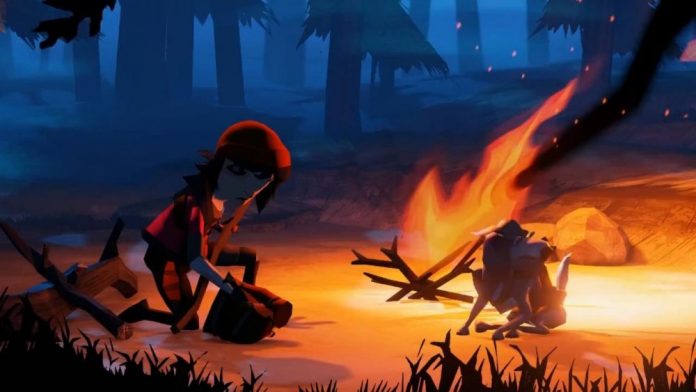 The Flame in the Flood is a roguelike survival game where you take on the role of Scout, a girl searching for the source of a strange radio signal in a largely flooded post-societal North America.

Scout’s story kicks off when a strange dog, Aesop, turns up at her post-apocalyptic campsite carrying a backpack bearing a strange symbol, with a radio inside it. Scout wastes no time deciding to set out in search of the sender and thus begins your journey into the stylishly beautiful wilderness of The Flame in the Flood.

You’re afforded a few minutes to get to grips with the controls, The Flame in the Flood’s menu and inventory pages (oh, the pages!) and some survival basics during a brief tutorial. You’re also told how to pick up items, scare crows and grab side-quest-style objectives that help you learn some necessary skills or recipes. Perhaps the most important thing you’re told, though, is something I missed on my first try: information on using the game’s Quick menu.

As you may have guessed from the above, The Flame in the Flood relies pretty heavily on menus (or, I suppose, journal pages as they’re presented in-game) and you should expect to spend a lot of your time within them, particularly in the crafting and inventory pages. The problem is that, while you’re engrossed in your journal, time continues to tick ever onward for Scout and Aesop, so being able to access vital items quickly is crucial to playing the game properly and actually surviving your excursion.

This being a survival game, there are a number of factors that you have to balance as you play. Scout needs to eat, sleep and rest and if she’s cold or wet she’s going to get pretty unhappy, too, which can lead to a drop in the other stats, as can negative effects like infections, lacerations and broken bones.

In order to survive in the wilderness, Scout will need to visit various islands on her journey to gather all manner of resources; including food, water, crafting materials and much, much more. Each island is different and they each boast a range of features from basic campsites and shelters to churches, marinas and even dislocated areas of old towns. Gathering and crafting are, naturally, at the heart of The Flame in the Flood and the game’s crafting system is one of the best I’ve encountered in a long time.

Alongside a multitude of naturally collectible resources, Scout has an extensive library of schematics that she can draw from, though some you’ll have to learn as you progress, and crafting items is, often, as easy as selecting the thing you want from the crafting menu and hitting ‘x’. Of course, there are some caveats. Anything you craft has to be crafted from something so you’ll need to have that thing in your inventory before you begin. Some items need to be crafted from other craftable items and some more advanced items can only be crafted at workbenches. Anything you create also needs to be able to go somewhere, so your next task is going to be managing Scout’s inventory. And it’s a task you’ll be performing a lot.

At the start of the game, Scout’s inventory is woefully, prohibitively small, forcing you to really consider whether or not anything you pick up is vital to your survival. Aesop has an additional inventory so that you can give him stuff to hold but it’s still not enough for you to be comfortable in the early stages. As I’ve said, anything you pick up or create needs an empty space to go into – so does anything that you want to swap between inventories. If you’ve no spaces left, you’re going to have to use or discard something to make room. That’s, perhaps, not really as bad as it sounds though, as discarded items appear at Scout’s feet in a handy box, ready to be picked up again when you’ve got room. Most items stack too, and once you’ve picked up or made something, chances are you’re going to be eating it, drinking it or crafting it into something else before too long.

The America of The Flame in the Flood is a dangerous place. Scout’s path follows the course of an enormous river that has burst its banks and taken vast swathes of land, including villages and towns, with it, washing everything down to the open sea through gently meandering courses and deadly, rushing rapids. The other third of the game (after resource gathering and inventory management) is played out on the river itself. As soon as the tutorial ends, you find yourself in control of Scout’s incredibly poorly equipped raft, ready to set sail on The Flame in the Flood’s procedurally generated waterways. 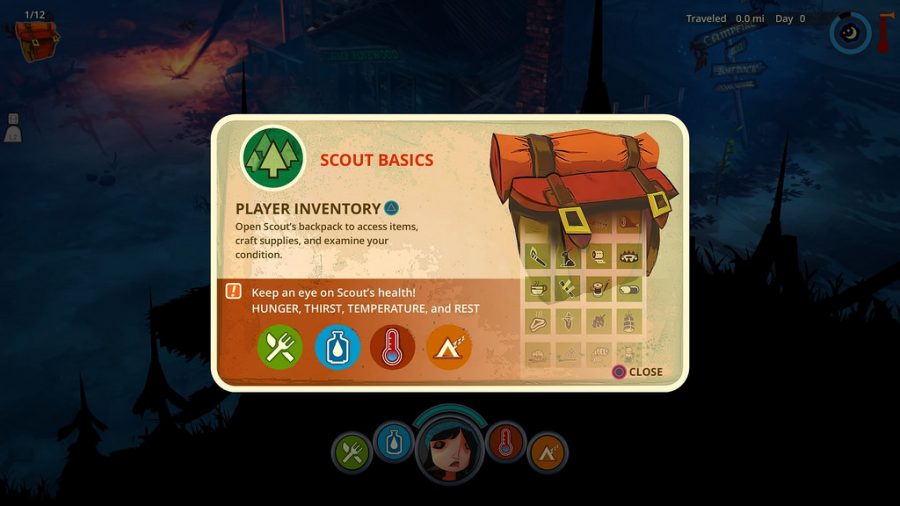 Scout’s raft, too, can be upgraded and modified, adding essential equipment such as a water collector, a shelter and even an engine. In the beginning, though, all you’ve got are a few planks, a barrel or two and an oar to steer yourself between the harsh rocks, the bobbing motor cars and the tangles of uprooted trees – not to mention the occasional house.

As you progress downriver, icons will appear, alerting you to jetties that you can dock your raft at. Not every piece of land can be accessed and those that can are sorted into a few different types where you’ll find various shelters, resources and other tools to help you progress. The Flame in the Flood is a game that emphasises forward motion, so once you’ve visited a place, you’re never going to be able to go back. There will be times, too, when you’re presented with three or four landing options at once and have to judge for yourself which will be the most useful at any given time.

Constantly pushing onward seems to be the soul of The Flame in the Flood. Everything about the game feels geared towards making sure that players continue to press on. The Campaign mode features, while not a story per se, at least a motivation for the player to understand and concentrate on; a focal point to keep Scout’s journey moving where other survival games might just plonk you down on an island or in the middle of a wilderness and let you get on with it. The flow of the river, the way it pulls your little raft inexorably ever forward, the frustration of feeling like you’ve never got enough stuff, the way the game seems to dissuade you from staying overlong in one place by limiting the types of resources you can find there – it all adds to the feeling that the game is going somewhere, that, eventually, there will be a conclusive revelation that will make it all worthwhile.

The Flame in the Flood successfully captures the intricacies of a better class of survival games and wraps them in a very neat, very pretty package, complete with an awesome alternative-country soundtrack by Chuck Ragan. It also adds a sense of urgency in its narrative, a unique and engaging challenge in the procedurally generated world, the ability to actually ‘complete’ the game via the campaign mode, and, ultimately, a great satisfaction in making it through to the other side and seeing just what truths wait at the river’s end.

The Flame in the Flood is available on PC, Xbox One and PS4. This review is based on the PS4 version.