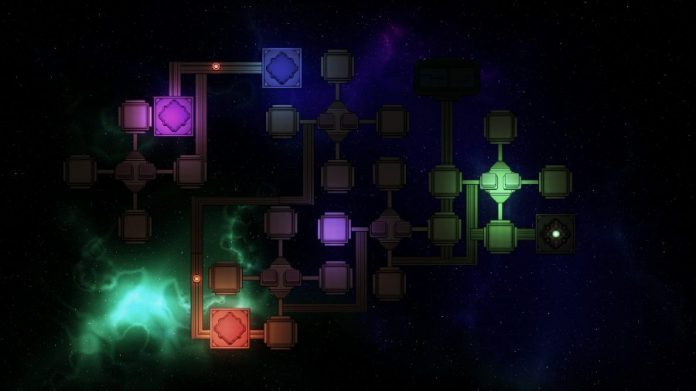 Imprint-X is a puzzle game with casual gameplay but intense aesthetics. The puzzles can be tiresome but Imprint-X still manages to be fun, vibrant and unique – if you approach it in the right way.

On launching Imprint-X you are treated to a beautiful and crazy sequence of events told completely through action and pictures. Alien nano-bugs have invaded and are infesting the minds of people all over the world. Your task is to hack into their brains and defeat the “wardens” created by the bugs to keep these individuals under their control. These wardens are big blocky mechanical devices that resemble something out of Alien or Bladerunner. Each one is unique and requires you to solve its puzzle before moving on to the next one.

But how do you do that? That isn’t an easy question to answer with each warden being so different. The main draw of Imprint-X is that it tells you nothing. From its minimalist menus to the gameplay itself, this game gives you nothing in the way of hints. Each warden you come across has a mix of buttons and lights and only by being observant can you solve them. Some wardens focus on timing, some on memory puzzles and some on simple trial-and-error to brute force your way through.

The visuals are far from bland; Imprint-X goes out of its way to make you feel like you’re on a transcendent futuristic space journey. While there isn’t much in the way of artwork – the blurred moving colours in the background are reminiscent of an old Windows Media Player visualisation – it’s actually very effective and somehow manages to feel epic in scale. Unfortunately there are some elements that don’t seem quite as polished, such as the bars that count how many times you have correctly timed a button press. Still, the aesthetics overall are bold and exciting, and make Imprint-X stand out from the crowd.

The main problem, however, is that despite its fantastic presentation, Imprint-X just doesn’t have much depth. The puzzles do increase in difficulty and add a few new features to consider but they largely stick to a basic formula that you figure out rather quickly. After a while, you’re likely left feeling bored. The challenges and trial and error aren’t hugely impressive and so the fun gets stale quite quickly; each button press becomes either fairly obvious or painstakingly tedious.

That said, this is a casual game; one to scratch an itch of puzzle solving rather than to keep you busy hours on end. Playing in short bursts, the striking visuals of Imprint-X really do make an impression, and playing a couple of puzzles at a time does manage to keep it fun and fresh. The no-nonsense UI and minimalist menus means that it’s easy to jump in for a few minutes at a time, and that really is the best way to enjoy what’s on offer here.

Imprint-X isn’t brilliant; it gets repetitive fairly quickly and hasn’t got the widest array of things to do. While I wish there was more depth to the gameplay, as a casual game, there’s enough here to pass a few minutes at a time – and it really packs a punch visually. If you want a quick blast of escapism with a bit of a challenge, then this what you’ll get. Nothing more, nothing less.

Imprint-X is available on PC.