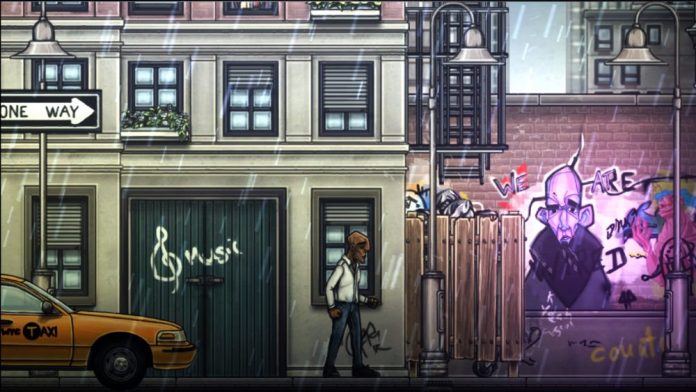 In Between is something rare indeed: a platformer with emotional storytelling that synthesises gameplay mechanics with its themes.

Focusing on a dying man struggling to accept his diagnosis of terminal cancer, the game takes us through the stages of psychological grief-processing: Denial, Anger, Bargaining, Depression and Acceptance. Each of these stages introduces a new mechanic as well as more of the backstory to our protagonist’s journey.

Up front, I am not a big fan of 2D platformers – I guess I came to gaming just a little after that era. I’m more of a Crash Bandicoot guy than a Sonic the Hedgehog person. The control input is very simplistic – with only the two analogue sticks required. However, In Between has gone some way to proving that you cannot tarnish a whole genre with one brush.

In Between is well made and pushes the platforming genre to the limits of creativity and innovation. It takes us on an emotional journey through his problematic relationship with his father, his relationship with his wife, the birth of his daughter, his journey to receiving diagnosis and his isolation afterwards. The warped levels our protagonist traverses – levels in which gravity is often an absent myth and impossible logic allows for mind-boggling feats – form the place ‘in between’. This liminal state is symbolic of our protagonist’s increasing sense that his whole life is the place ‘in between’; a waiting room no less, caught between living and dying, happiness and sadness, acceptance and denial.

The developers, Head Up Games, proudly claim these levels are hand-drawn, and it shows: there is a steam-punk beauty to them; rusted cogs and eerie blooming flowers turning around you that perfectly reflect a mind on the edge of madness and despair, whilst striving for greater love and spiritual understanding. The principle obstacles are spiky glass-shards, and hitting them will cause the whole world to fracture and reform. Not only is this beautiful to watch no matter how many times you die (and I got an achievement for dying over 100 times), but it also fits seamlessly with the themes of the story: a life shattered with the knowledge of imminent death. 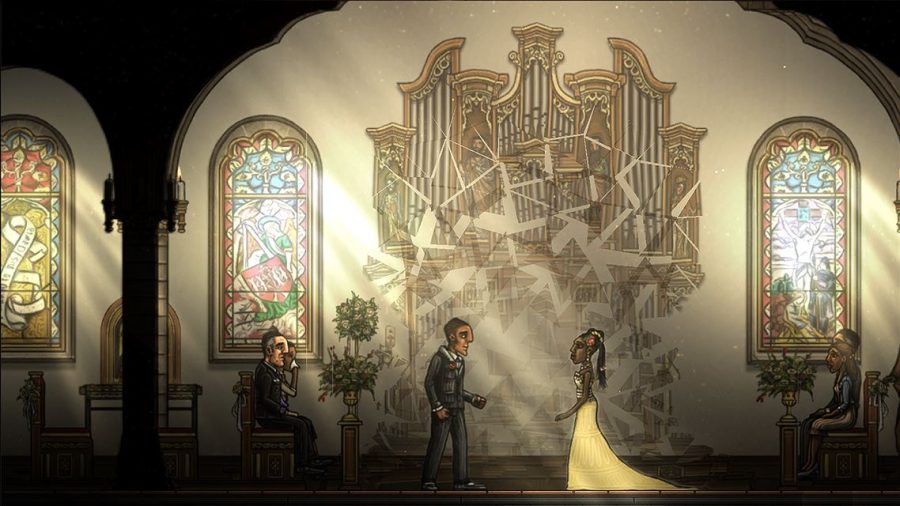 There are cracks and seams scattered around the levels, and walking past them will tear open a scene from the protagonist’s life, a snippet of a memory coupled with narration. These are rewarding to discover and propel the momentum of the plot. Acts are punctuated with scenes where you leave the ‘in between’ and act out memories from the protagonist’s life. These not only deepen the story but often give you subtle introductions to new mechanics. For example, in the ‘Denial’ section, we act out a memory in which a boyhood version of the protagonist is scared of the darkness whilst he is out camping. We run from the darkness at first (and if it captures you, game over) but then meet our mother, who comforts us, and explains if we ‘faces the darkness’ it cannot harm us, so we turn right around and walk forward into the dark, which recedes. These significant moments are made more potent with excellent music and sound design, which continues throughout the platforming segments too.

This becomes important when you return to the ‘in between’ and are forced into scenarios in which you must carefully prevent the darkness from creeping up on you from behind. This is one of many unique mechanics that gets introduced, and these are what really makes In Between stand out. Each Act offers something new. In ‘Bargaining’, you have to guide a mirror image (ghostly, almost like a soul) of the protagonist through a similar but not entirely symmetrical level. The mirror to your character performs the opposite of your control input, and you must guide both soul and protagonist together simultaneously.

Where In Between further differs from normal platformers in terms of mechanics is that instead of a simple jump, you can change the direction of gravity (up, down, left or right) which will cause your character to ‘fall’ towards the nearest surface. This adds a whole new complexity to navigating these difficult levels and you really have to plan your moves carefully or else be shattered and start again. One thing I would say is that the difficulty level here is high. Very high. This is not a casual platformer in any sense: the puzzles are fiendish. You’ll require twitch muscles, patience and a lot of forward thinking. At times I almost gave up because I died so many times on a level, only to pick it up again the next day and obsessively continue, having had an idea overnight about how a section could be completed. While this makes progress rewarding, it does interfere a little bit with the storytelling. The snippets of story that appear while you explore levels, which are evidently designed to build momentum as we head towards a powerful catharsis, can lose their impetus when you die 50 times on one difficult segment.

For full disclosure, there are a couple of minor bugs I discovered. If you die just before you merge with your mirror-image in the ‘Bargaining’ section, your character will remain fixed in the hovering embrace pose as they move (doesn’t affect the gameplay but it looks funny). Dying again fixes the problem, so it is relatively minor but still immersion-breaking. In the broad scheme these bugs don’t, for me, detract from what is a well-thought out, deeply psychological game that is also satisfying to play (if a little jerky at times due to its difficulty spikes). 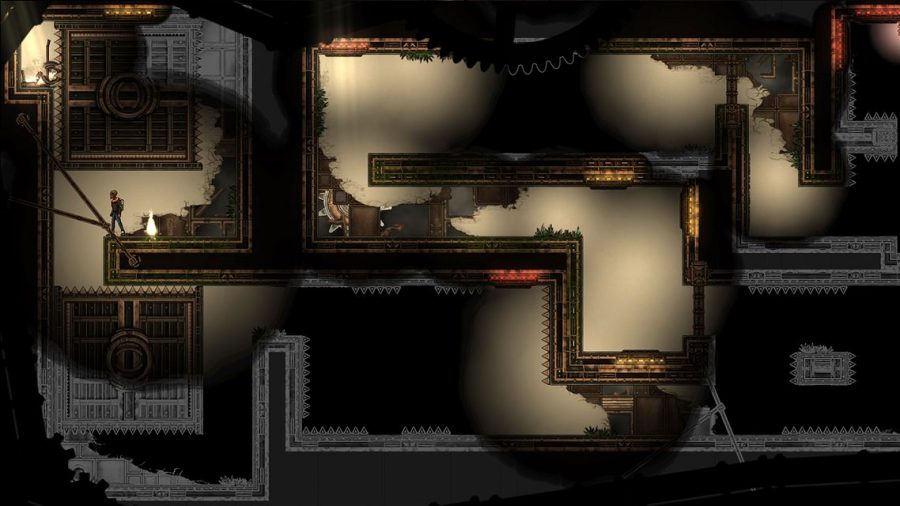 Overall, In Between is a stellar title. It’s a refreshing take on the platformer genre in a market that is saturated to breaking point with titles from indie studios. I, for one, would have like to see more games with this unique focus on storytelling, and stories that are psychologically researched (the five stages of grief processing are based on the Kübler-Ross model). Though In Between certainly has room for improvement (for example, with a greater variety of control inputs from the player), it could well mark a bold step into something new and exciting.

In Between is available on PC and Xbox One. We reviewed the Xbox One version.