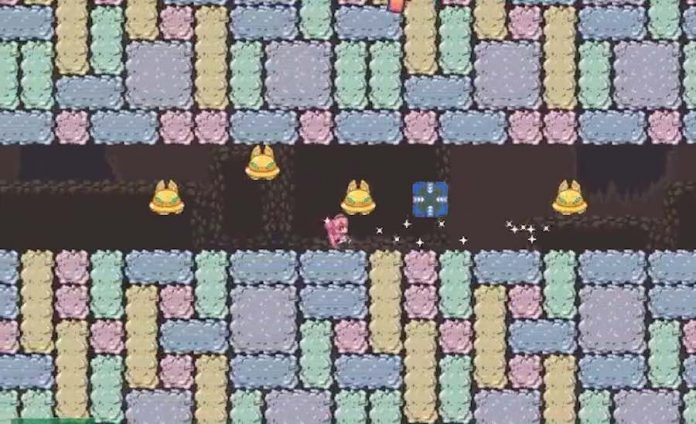 Anime-themed shoot-em-up Kamio Recoil features an intriguing premise: your character’s only means of propulsion is their weapon’s recoil.

Unfortunately, as innovative as this may initially sound, the game fails to ever successfully build upon it, resulting in an experience that can only be described as positively painful.

I freely admit that I’m not the world’s greatest authority on Japanese animation. But from my brief exposure to the medium I’ve ascertained that there are three incontrovertible anime truths. Firstly, all male characters between the ages of 15 and 25 are relentlessly and infuriatingly miserable. Secondly, the laws of physics are treated as mere suggestions rather than strict guidelines. Finally, the female characters’ eyes are so freakishly large that they risk expelling brain matter each time they blink.

While there are no male characters in Kamio Recoil, the latter two rules are very much in evidence. The storyline is wafer thin; something about a squadron of five anime girls saving the world from demon invaders. It seems likely the story was tacked on afterwards – though in all fairness, shoot-em-ups aren’t generally renowned for their complex plots. Less excusable is the way that the game squanders its intriguing central concept.

Kamio Recoil’s Steam Store page describes the game as “an exploration shooter, where every shot propels you through zero-gravity”. I’m unsure as to whether the game’s creator doesn’t know what zero-gravity means, or whether it’s a limitation of the game’s engine. But I can assure you that the game does not take place in a zero-gravity environment, rather a low-gravity one. 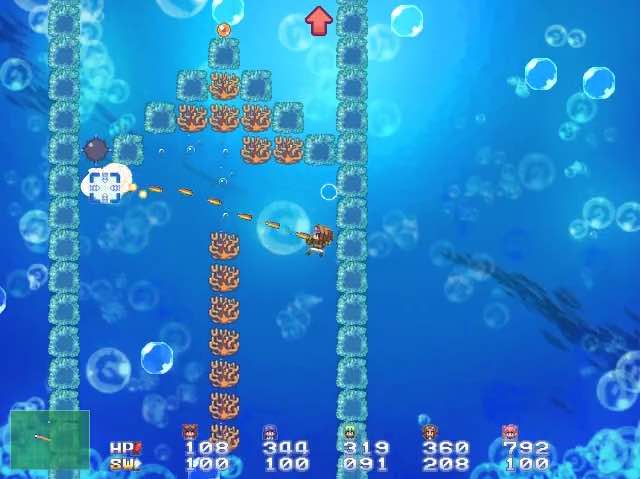 This might seem like a minor nitpick, but it fundamentally alters the way the game plays, much to its detriment. Instead of free-floating gracefully through each of the game’s 2D levels, your character begins plummeting downwards the moment you start. What could have been a blissful bullet-dodging aerial ballet turns ends up resembling an anime-themed version of Flappy Bird.

The game eschews the auto-scrolling mechanic seen in many other shooters and instead lets you progress at your own pace.  You can roam freely in any direction; your ultimate objective being to reach the glowing exit portal, navigating the labyrithine levels. However, the controls are so clunky and the physics so ludicrous that even traversing enemy-free areas is a real rigmarole. You end up frantically firing just to fight the downward pull of the Kamio Recoil’s  not-zero gravity. This in turn results in you ping-ponging around the level, making it near-impossible to reliably control your character.

Furthermore, you have a finite amount of ammunition with which to both engage enemies and propel yourself about each area. Run out of ammo and your character just ends up flailing around ineffectually on the floor, incapable of even walking or crawling. There are ammunition pickups which can prevent his happening but your ammunition meter also doubles as your health meter. So if an enemy hits you, you have a diminished chance of escaping.

The foes in this game aren’t particularly intelligent, and will sometimes crowd up against a wall, oblivious to the fact that they can’t reach you. Conversely, other enemies fire absurdly accurate projectiles, capable of hitting you from off-screen. Kamio Recoil is full of baffling ‘features’ such as these, although whether they’re conscious design decisions or oversights isn’t entirely clear. Coupled with the wonky physics, these additional factors make Kamio Recoil a largely joyless experience. 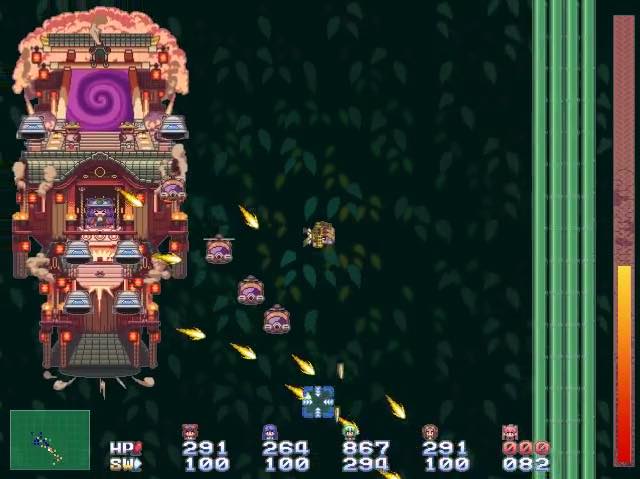 It’s true that the game does sport the stylings associated with other anime-inspired shooters, but the graphics are passable at best. Each of Kamio Recoil’s five worlds has a different graphical theme, though the differences are largely cosmetic. Less impressive are the game’s heroines who are also very poorly animated, with a total of about four frames of animation per character. Their lack of movement gave me the rather unsettling sensation that my character had expired and that I was launching a corpse around the levels.

Despite its many flaws, Kamio Recoil does offer glimpses into what might have been.  Take the game’s water-themed area, which features a constantly shifting current. Since you’re no longer being pulled downwards, you can concentrate on propelling yourself around the level and engaging your enemies. For a few brief moments, I actually found myself enjoying the game. But then the next world came along, and it was business as usual.

Another interesting touch is that the game lets you switch between characters, each heroine sporting a different weapon. The intention was presumably to force you to think strategically, though this doesn’t come off in practice. It takes so much effort and concentration to stay aloft that you barely have time to consider which weapon or character to use.

Kamio Recoil has, at its core, a solid concept, yet the execution of this concept is deeply flawed. Its clunky mechanics, awkward controls, infuriating enemies serve to stifle any appeal it might have had. The end result is a game that, despite its brightly-coloured anime trappings, is a dismal affair.

Kamio Recoil is available on PC.