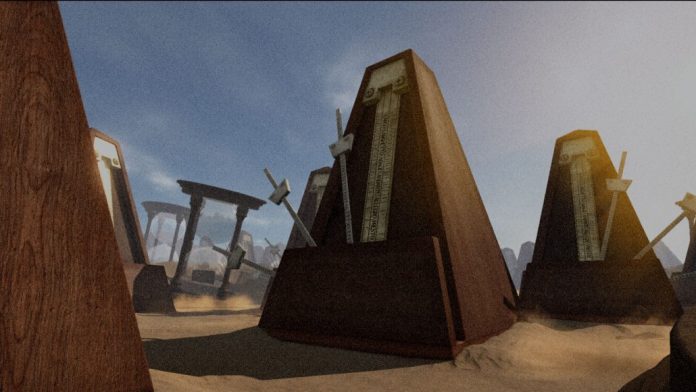 “Who probes the Neuroprober?” is not a question that I ever thought I’d ask.

Nevermind defines a Neuroprober as “a unique physician who is able to venture into the minds of psychological trauma patients”. Yet upon launching the game, I began to suspect that the Neuroprober vetting process was less than rigorous. My first clue was that the Neurostalgia building, where my journey into malpractice began, was entirely unmanned.

So no-one was there to raise an eyebrow when I signed myself in as Doctor Stabby O’Slashyscalpel. Though there must been have been a janitor about, since the name then appeared next to my office door. Nor did I receive the mildest rebuke for using magnetic letters – themselves elements of a patient’s virtual psyche – to spell out smutty words. I think it’s fair to say that Neurostalgia’s selection criteria could do with a little tightening up.

Nevermind places you in the sci-fi shoes of one of the aforementioned Neuroprobers, charged with the serious business of healing patients’ mental wounds. This is accomplished by virtually entering their subconscious and poking around down the side of their mental sofas. That may sound like a cue for a neuron-prodding puzzle game, but Nevermind is more akin to a walking simulator.

The game’s opening area and tutorial level are deceptively mundane, but things take a turn for the spectacular when you enter a patient’s consciousness. You find yourself roaming through a range of diverse, dark and sometimes breathtaking mental landscapes. Despite suggestions to the contrary, it’s not a conventional horror title, though it is often quite grim in tone. There are no foes to pursue you and should you bumble into a hazard, you’ll merely be transported back to a safe position. 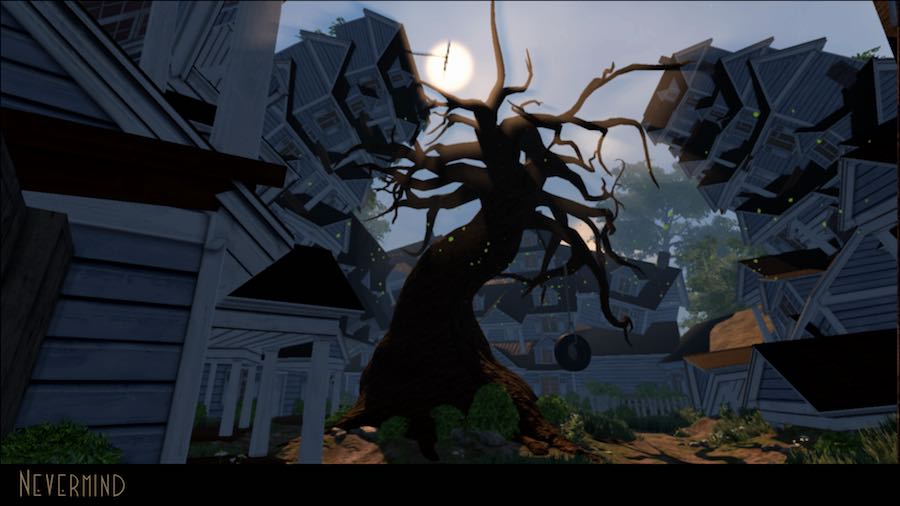 That said, Nevermind’s arsenal of astonishing imagery is enough to give Silent Hill a run for its money. The second patient’s starting area, a pristine looking city block, morphs into a flame-licked otherworld. Colossal hands thrust through the previously occupied windows. The streets, once empty, are suddenly occupied by gruesome, though stationary, dummies. Disturbing stuff admittedly, but Nevermind’s less horrific locations are equally as memorable as its bleak vistas, more so in some respects. That’s not to underplay the role that sound plays in creating Nevermind‘s locales,  but it’s certainly the visuals that take the lead in setting the tone here.

Another one of the game’s stand-out moments occurs when you delve into the psyche of a concert pianist who suffers from Alzheimer’s.  At one point, you open an innocuous-looking door only to find yourself in a sprawling desert, surrounded by towering metronomes. Not only is this spectacle visually engrossing but it’s also emotionally affecting, echoing the pianist’s fear of losing her faculties.

Nevermind’s logic puzzles are similarly symbolic. They’re generally enjoyable, if occasionally obtuse. But they’re not just there for the sake of giving you something to do. They also represent an element of the respective client’s trauma. As you’re journeying through the pianist’s psyche you’ll come across several deformed human figures. Each is twisted into the shape of a musical instrument, skewered by keys or strings that must be played in a particular order. Even as you’re solving these puzzles, you’re learning more about the unpleasant experience that shaped the pianist’s life.

Unfortunately, you’re also given the onerous task of collecting several discarded photographs that are scattered around each area. These aren’t mere collectibles but must be gathered in order to progress. Some doors only open when you’ve collected all the necessary photos but the game fails to tell you which.  The final photo puzzles that crop up at the end of each level are also ludicrously difficult.

It’s worth mentioning that PC version of Nevermind also sports ‘biofeedback’, a mechanic whereby the game supposedly reacts to your emotional state. This requires a web-camera and a heart-rate monitor and reportedly makes the game a more terrifying experience. These features are wholly absent from the Xbox One version. Nevertheless, the tutorial makes references to them, something which should really have been cleaned up. As it stands, Nevermind is not a title that will fill you with terror, though it will frequently make you uncomfortable. 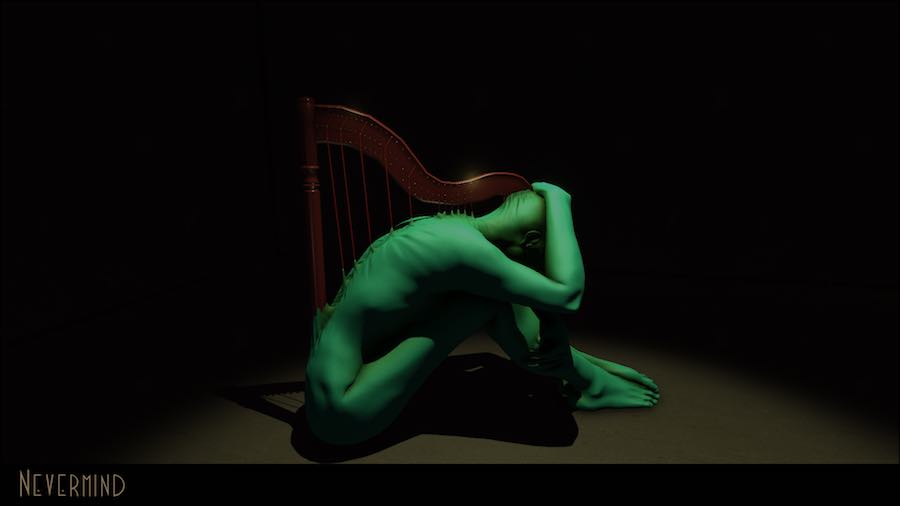 Nevermind does deserve credit for tackling issues that are grounded in real life.  Genuinely adult issues such as suicide, PTSD, abuse and other sensitive topics are all touched upon. Yet while attention has been paid to the characters’ individual stories, the game suffers from the lack of a framing narrative. Consequently, with little to tie you to the story itself, it sometimes feels like you’re an observer rather than a participant.

It’ll take about four or five hours to finish the game, but completing all four cases gives you only the briefest of congratulatory messages. The game doesn’t lead you to expect some grandiose revelation, but it‘s something of an anticlimax. Regardless, if you let it gets its hooks into you, you’ll be able to tolerate its flaws. While it won’t sate hardcore horror fans, Nevermind is visually and thematically striking enough to be worth a look.

Nevermind is available on PC and Xbox One. We reviewed the Xbox One version.