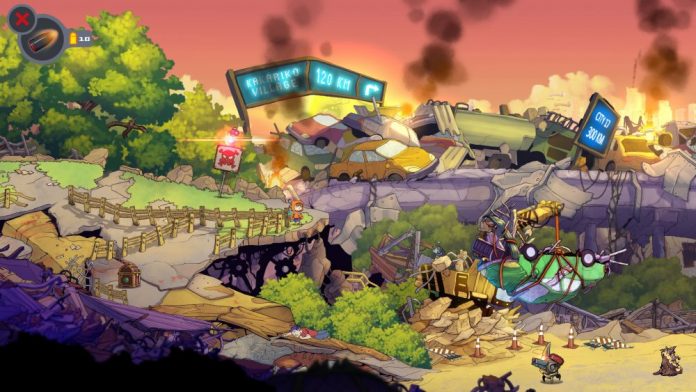 Take the backbone of the run and gun genre, throw in a basic cover system and then strap on plenty of scenarios where you not only need your shooting skills to survive but also your brains.

What do you get? The answer is Rise & Shine, developer Super Awesome Hyper Dimensional Mega Team’s first title for PC and console.

You play as Rise, a young boy whose adventure begins when taking an innocuous trip to the shopping mall. Everything is fine until a meat-headed space grunt shows up, killing indiscriminately, and whilst the Legendary Warrior is quickly on the scene to save the day, he unfortunately suffers a mortal wound in the process. Warning of an impending invasion, with his last breath he bestows upon Rise a mythical gun, Shine, instructing him to take it to the king of Gamearth. And so with gun in hand, it’s now up to you to take control of Rise and fight back against the space grunts of Nexgen.

The first thing that hits you about Rise & Shine is just how beautiful it looks. Its colourful 2D hand-drawn graphics are simply sumptuous, with both characters and backgrounds exhibiting a great level of charm and detail. You can just tell that a huge amount of effort has been put into realising Rise & Shine’s world, and it has paid off. Being set on Gamearth, there’s a lot of fun to be had spotting the many amusing references to and parodies of popular gaming franchises hidden and not-so hidden throughout the game. Space grunts, for example, are obviously Gears of War COG Soldiers what with their thick muscular arms emblazoned with big red skulls, and you’ll also travel through a Black Pesa building complete with a certain person’s iconic crowbar.

It’s not long after you begin playing that you discover Rise & Shine not only looks gorgeous, but it runs wonderfully smooth too, never slowing down even when things get hectic. And trust me, hectic is how things frequently get. Enemies bombard the screen, spewing forth a mass of projectiles for you to shoot down or evade, and bosses launch gargantuan attacks in a frenzied attempt to thwart your progress, but the framerate always remains solid. It means that you never feel betrayed by the game. That progression is driven by your skill, with no factors outside of your control limiting your performance. That’s important, because your skills will surely be tested. 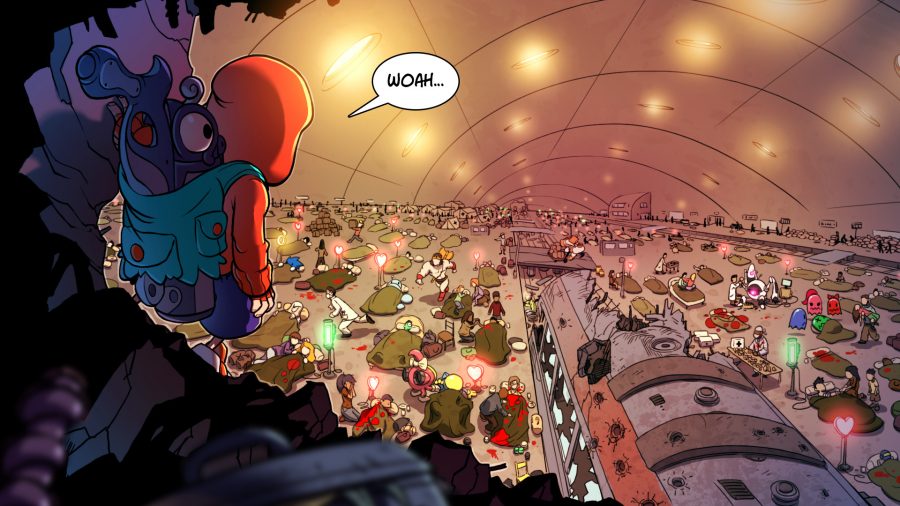 Rise & Shine’s run and gun gameplay is made richer by the sheer variety of enemies thrown at you and the slew of gameplay mechanics at your disposal. Whilst you can use dashes and jumps to avoid enemy fire, for instance, there’s also the occasional wall that’s great for cover; though it’s not a game where you can just turtle behind a barrier to make things easy for yourself. Cover deteriorates as it comes under fire, airborne enemies rain danger from above, and some foes will make a beeline for you to end your life in close quarters, forcing you to think fast and act even faster to stay alive. During the course of your adventure you’ll acquire some alternative firing modes to make matters a little more manageable, namely remote control bullets and explosive grenades, but the most helpful upgrade you acquire is the ability to switch to electric bullets, which are great for taking out robotic enemies. Even once you’ve maximised your arsenal however, Rise & Shine remains very challenging.

On the scale of things I would say that Rise & Shine’s difficulty, for the most part, is pitched just about right. Depending on your skill level you’ll possibly die quite often, but the lenient checkpoints and enjoyable gameplay means you’ll dive right back in and persist until you’ve overcome the challenge at hand. One little bugbear I did have, is that I sometimes found the controls a little finicky in the heat of the moment. Playing on Xbox One for review, switching between firing modes with the left shoulder button whilst evading enemy bullets often felt clumsy, especially given that there’s no obvious visual clue as to which mode you’re using unless you look into the top left corner of the screen. It’s perhaps needlessly complicated too, as the remote control bullet firing mode is only really useful on a handful of puzzle-centric occasions so could have possibly been mapped elsewhere.

For me, Rise & Shine’s biggest misstep is a spike in difficulty upon reaching what is essentially its final level. Beginning with a section that is unrelenting as waves and waves of enemies pour in, the rise in challenge can feel a little excessive. And once you do manage to get past it, you’re then met with a boss fight that can feel like a slap in the face. Thankfully you do trigger a checkpoint before said boss fight, but if you have to leave the game for any reason you’ll find yourself returning to the very start of the level again upon your return. I’d consider myself an above average gamer who remains calm in the face of a challenge, but this level really came close to testing my patience. So much so, in fact, that I reached out to the developer to express my thoughts on the difficulty spike who said they would look at further balancing Rise & Shine for launch. 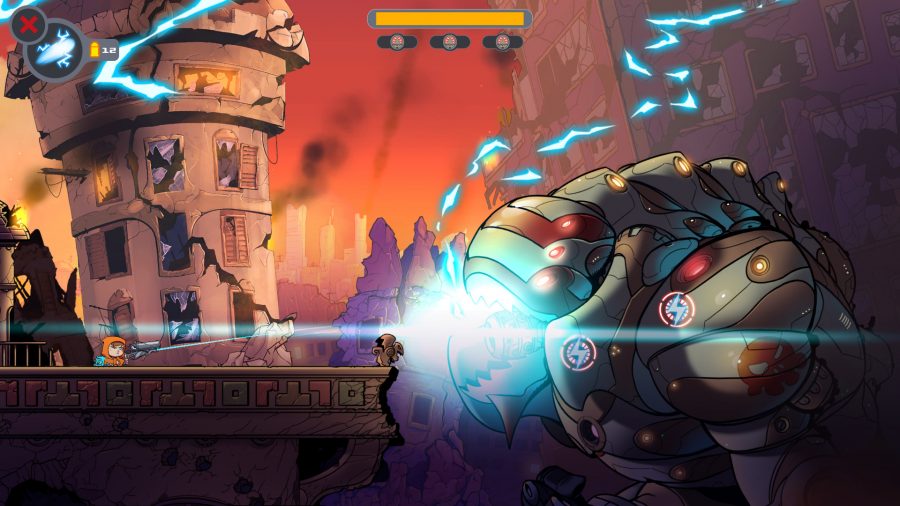 In any case, Rise & Shine is quite a short affair. I reached the last level in less than three hours, though I admittedly then spent a further three or four defeating its boss. For completionists there’s the option to reload levels in order to find a handful of collectables that are quite well hidden, but I didn’t see that there was much impetus to do so, whilst hard-core players will be more than thrilled with the unlockable Iron Man mode in which levels have to be completed without the ability to respawn. Quick tip; try and find all the collectables before starting Iron Man mode if you wish to do so however, as your ability to load levels completed on normal mode will be lost. Aside from that though there’s little draw other than the strength of the gameplay. There’s no score chasing or leaderboards that games in the genre usually build in to offer extra longevity and competition, and that’s a real shame.

All things considered though, if you like a good challenge and value quality gameplay over length, which you should, Rise & Shine is a great little title and a great start to the gaming year. The visuals impress from start to finish, the audio constantly delights despite a lack of voice acting, and the frenetic action is varied and addictive. It’s a game for gamers who’ll chuckle at every little visual cue that’s generously strewn throughout its running time and then go back to see if there’s any they may have missed. Those with little patience may quickly find themselves throwing their pads in despair, but those who can hack it will be utterly charmed.

Rise & Shine is available on Xbox One and PC. We reviewed the Xbox One version.