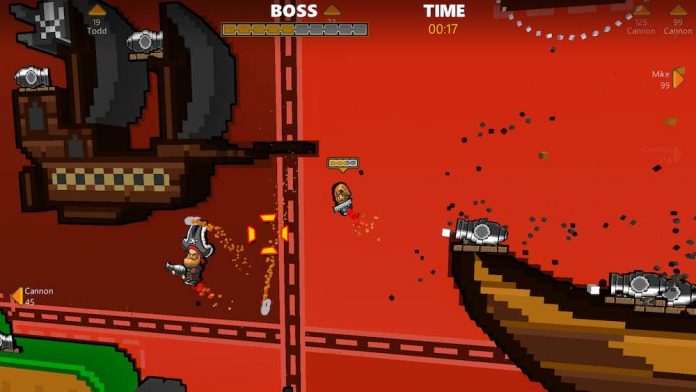 In most shooter games, the player starts out with a simple pistol, if any gun at all.

Over the course of the game the weapons get more powerful. Eventually the player will unlock some sort of explosive launching device, say a rocket launcher. The ammo is always few and far between. Conservative players keep every last rocket until the final boss, just in case. That’s not the case in Rocket Riot; it is all rockets all the time.

The main campaign of Rocket Riot follows the story of the big bad boss guy, Blockbeard the pirate. The game starts with Blockbeard breaking out of prison and putting his nefarious scheme into action. Blockbeard steals the legs of everyone from the local town as revenge for the loss of his own legs. In order to stay mobile, the town equips everyone with rockets on their bottoms. Through 48 rocket filled levels, the player has to fight a huge array of enemies and bosses to defeat Blockbeard.

Every sixth level of the campaign features a boss fight followed by a cutscene. The biggest surprise, however, is that after defeating the final boss, there is no final cutscene. After dealing the final blow, the game just unceremoniously kicks you back to the main menu. I was so surprised that I actually replayed the final boss and made sure I didn’t touch the controller and accidentally skipped something. Apparently not. However, if you play through some of the other 10 mini-campaigns, they make some references to the final boss in cutscenes.

The core gameplay of Rocket Riot is your standard twin stick shooter. The gimmick, of course, is that you play as a rocket who fires rockets at other rockets. There is no weapon customisation, but there is a wide variety of power-ups, power-downs, and power-arounds. 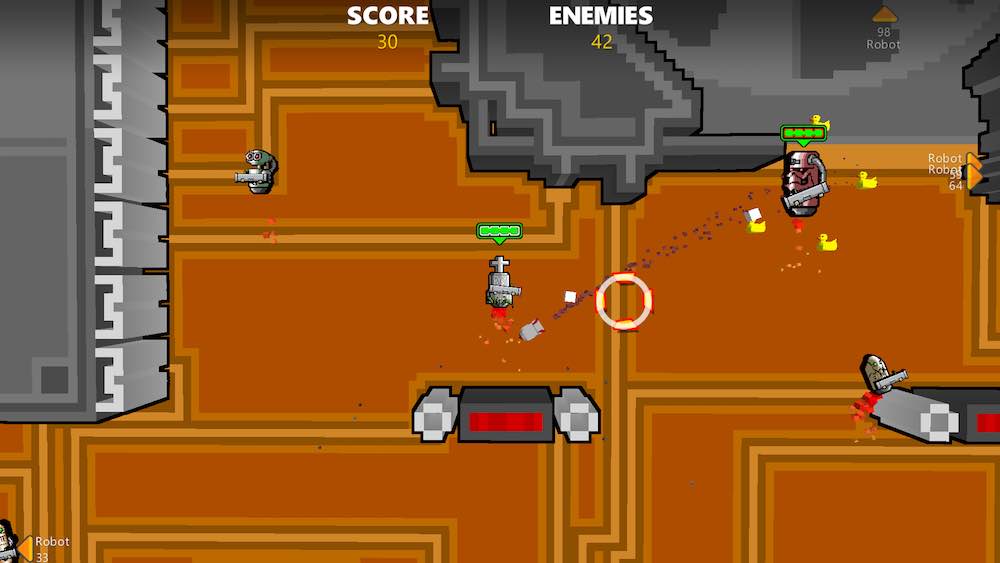 Green power-ups are incredibly strong and are almost necessary against some bosses. Whether it’s firing giant rockets, firing three rockets at a time, or having piercing rockets, it’s always a good time. There are also blue power-ups, which focus on defence more than offence. This includes a ghost power-up, which lets you go through blocks and can make levels impossibly easy or just plain impossible. The red power-downs are a huge determent, but they usually do it with a laugh. My personal favorite is replacing your ability to fire rockets with the little BANG flag that pops out of your gun. Then there are the yellow neutral pick-ups, which are mostly around for fun visual effects. Effects like more colourful explosions, more particles, or shooting balls instead of rockets.

As mentioned earlier, there is a main campaign, as well as 10 other mini-campaigns. Overall, it makes for quite a bit of content, but really not that much variety in gameplay. Some of the other campaigns seem to have their own little gimmicks or uniquely acting enemies, but the core gameplay is still the same. There are four main game modes in the campaign, deathmatch, destroy the object, rugby riot, and boss fights. Each has a slightly different feel to it, especially rugby riot, that involves scoring touchdowns rather than killing enemies. The core gameplay of rockets and rioting gets stale fast, making it hard to pick up and beat Rocket Riot in a single sitting.

The difficulty, or lack thereof, is a big reason that Rocket Riot becomes boring, because it rarely feels like a challenge. The entire campaign can be completed with less deaths than fingers on your hand. Most bosses can be defeated in less than a minute. The par times to complete levels are normally eight minutes, but almost never take longer than two minutes to beat. It was surprising to realize that the health bar, which is divided into four sections, completely regenerates over time. If health didn’t regenerate, or only regenerated a cell if some health remained, the game would’ve played a lot differently.

If you hate getting catchy songs stuck in your head for days, then start by muting Rocket Riot. The theme on the main menu, “Banana Man”, is one of the catchiest songs of any video game ever. The rest of the soundtrack is pretty solid too. Bright and happy visuals are a nice compliment to the upbeat and wacky soundtrack. And the 8-bit style was a must in a game with so much block destruction. 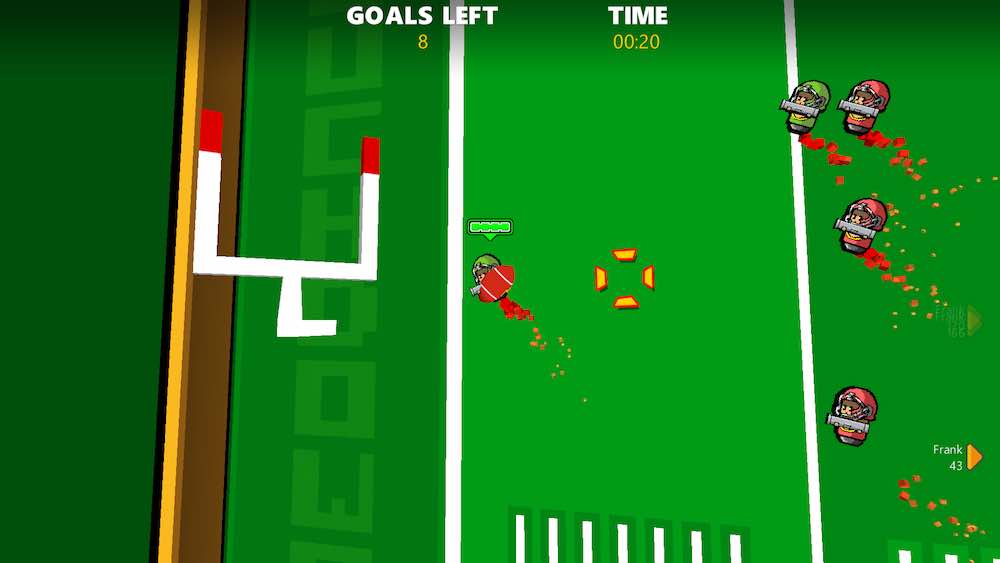 334 unique playable characters. Most games can’t even advertise half that many characters in their game, let alone playable ones. There is an impressive variety of characters to choose from. Whether it’s a banana, a gravestone, or a member of the dev team, Rocket Riot has the character for you. That being said, it’s all strictly cosmetic, and there’s no customisation. But it’s still fun to kill an enemy, and then be able to play as that enemy in the next level.

A pair of slippers.

Rocket Riot is available on PC.