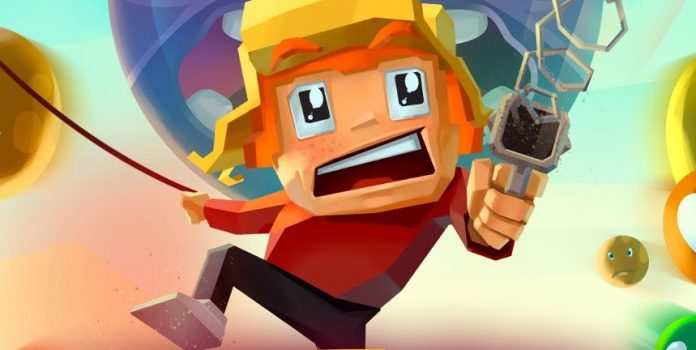 It’s becoming increasingly – and disappointingly – rare for an indie game to establish any sort of originality, be it aesthetically, mechanically or narratively. Although it is a brief and fun excursion into the world of indie, Spheroids does not come close to buckling this trend.

In short, silent cutscenes, the story is established. You travel the world as Lucas, and under the command of a scientist named Otto, it’s your task to fight against aliens known as Spheroids, which look like giant, walking bacteria cells. It’s all very Rick and Morty-ish, which is certainly not a negative. At its core, Spheroids boasts simplicity, primarily in its 2D, pixel-dotted visual style. For the most part, it does this well. It’s unfortunately when this simplicity creeps into every other aspect of the game’s production that it starts to becomes a burden.

The visual style that Eclipse Games deploy in their platformer is initially quite charming. It’s bright, colourful, and each stage feels at least somewhat different from the last. The presentation is coupled with a truly solid soundtrack. Whereas some tracks are obviously and continuously looping alongside the gameplay, they do accompany each level well. Jazz drums and classic 8-bit notes add an ounce of fun to the proceedings of what is otherwise a rather tedious gameplay experience.

Spheroids‘ presentation seems to take a lot of influence from Phil Fish’s Fez from 2012. Whereas Fish’s game was revolutionary, for all that Spheroids does right, it certainly never comes close to that marker. Taking such an undue influence from a game like Fez essentially ruins what a great sense of identity Eclipse Games could have created had they let their own style run just a little more free. 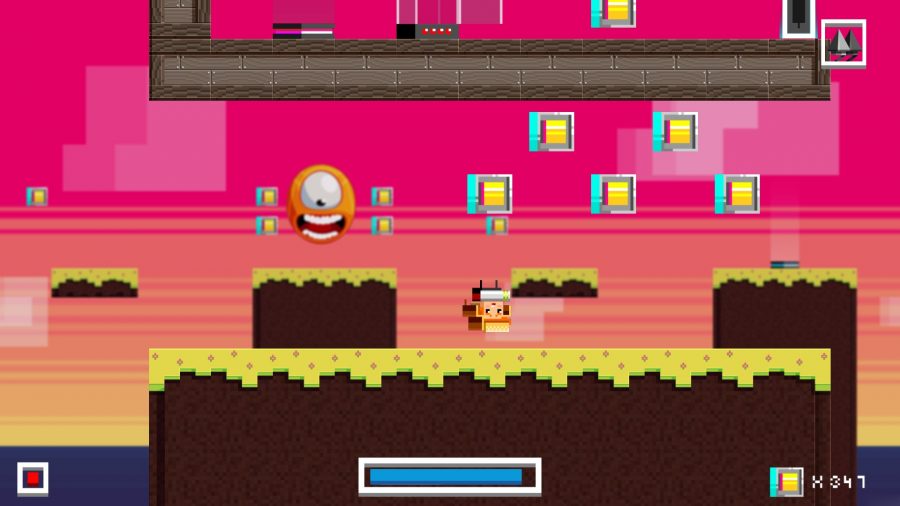 The main gameplay in Spheroids revolves around jumping, using a harpoon that can be shot vertically to destroy enemies, gravity boots and a grappling hook (because every title ever released now needs a grappling hook, doesn’t it?). These mechanics may be as generic and re-hashed as they sound, but they do make for some enjoyable platforming at times. The combat, however, is never particularly fulfilling. There is a level of skill involved – aiming your harpoon to coincide with the bounces of enemies takes a bit of practice – but most of the time, the combat feels unnecessary. The game would have benefitted greatly from more emphasis on platforming.

I never felt like there was any real incentive to progress in the game, either, nor is there any real penalty for failing. Spheroids does not offer any serious challenge; checkpoints are generously dotted around the short, country-based levels, so you’re never under pressure to succeed. There is a store to purchase certain upgrades, but there is little to no drive to do so whatsoever as for the most part, they’re not necessary in completing the game.

Spheroids unfortunately has a few technical issues that mar the experience somewhat. The camera is incredibly wonky at the worst of times, and several times during my playthrough enemies became stuck on certain platforms, which then made it difficult for me to advance through the level. The game is incredibly short, so having these issues in such a short run makes these missteps all the more disappointing. I finished it in under two hours and that was with taking quite a few breaks.

The most frustrating thing about playing an indie release like Spheroids is the feeling that the developers were not even attempting to create something fresh or novel. It takes undue influence from many other – better – indie games on the market and doesn’t try hard enough to make its own mark. That’s not to say that there is no hope for the indie market in 2017, however; the horizon actually looks very hopeful for indie releases, but Spheroids just doesn’t cut the grade.

Spheroids is available on PS4, PS Vita, Xbox One and Wii U. We reviewed the PS4 version.