So Resident Evil VII: Biohazard came out on Tuesday, which I’m sure you’re all happily playing right now. I, however, am currently making my way through the HD remaster of the GameCube remake of the original Resident Evil, and you know what, there’s one thing about it that really winds me up and sends shivers down my spine way more than any zombies do; fucking inventory space.

Don’t get me wrong; it’s not a problem that’s exclusive to Resident Evil – many games impose arbitrary limits on how much junk you can carry at one time – but Resident Evil truly takes the cake.

It all starts with the rather strange decision that Jill Valentine is allowed eight inventory spaces, while Chris Redfield is only allowed six. Why this is I do not know, but it’s only the beginning of the game’s absurd item carrying bollocks. You see, pretty much everything you pick up needs an inventory space, and in a game where it’s necessary to always carry some weapons to defend yourself, plus a healing item for the times of dire need, you’re left with little space to pick up the rest of the shit that you might need at a later date along the way.

Then it just gets worse. If you want to save your game you need to be carrying an ink ribbon which takes up a space. If you find a key, you guessed it; you need a free inventory space. I mean, come on. One. Small. Key. Surely there’s some crevice where Jill or Chris could put it so it doesn’t limit their carrying ability. Say, maybe in Jill’s bra or down Chris’ pants? Or what about in their shoes? In the world of Resident Evil it doesn’t matter how physically big an item is, how much it weighs or how important it is to your cause – it’ll still take up a space and that’s that. Live with it or fuck off home. 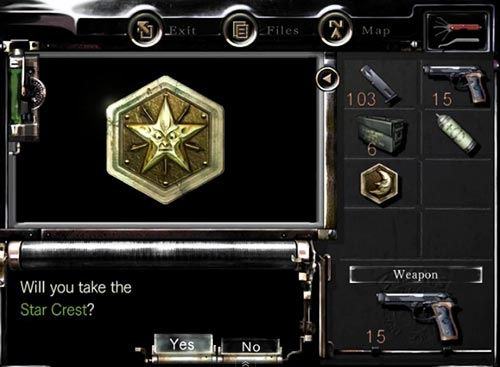 And then you get to the puzzles. Resident Evil’s glorious puzzles. Sometimes they’ll require an item that you found an hour ago, carried with anticipation until you lost the will to live and then stashed in the storage trunk in a safe room. Other times they’ll require you to carry multiple items, such as the four glass jars you need to make the mutant plant killing V-Jolt. In other words, get used to running back and forth to safe rooms, freeing up inventory space or retrieving items that you now need, because that’s how you’re going to be spending your time. Of course, it’s not just a cheap and tedious way of extending the length of the game, no; it’s fun and requires a great deal of skill. Get stuffed; it’s a lazy game mechanic that was irritating back in the day and is absolutely infuriating now.

What’s more maddening is that the GameCube remake made the inventory shenanigans even worse too. The need to burn the corpses of downed zombies in order to prevent them from coming back as extra angry versions means you need to carry a hip flask full of kerosene and a lighter at all times, unless you’re keen on the idea of losing some pounds of flesh. Just thank god the defense items it introduced don’t use up space, otherwise I think I’d just implode.

So, yeah. The scariest thing about Resident Evil isn’t contending with zombies, or sharks, or lizard men, or the Tyrant. It’s not the desperation and isolation of being trapped in a remote mansion that’s apparently being used for some weird biological experiments. It’s not even the bastard spiders that are as big as a sodding donkey. No. It’s coming face to face with a fucking key that you need to progress but can’t pick up because you have the nerve to carry some weapons, a first aid spray, some ammo, a lighter and some kerosene. Truly horrifying indeed.

Stupid Things in Videogames is a weekly satirical post where we firmly put our tongues in our cheeks and talk about the frustrating and/or amusing things that games frequently present us with.

Got your own pet peeve you want us to tear into? Comment below and we might just do so.