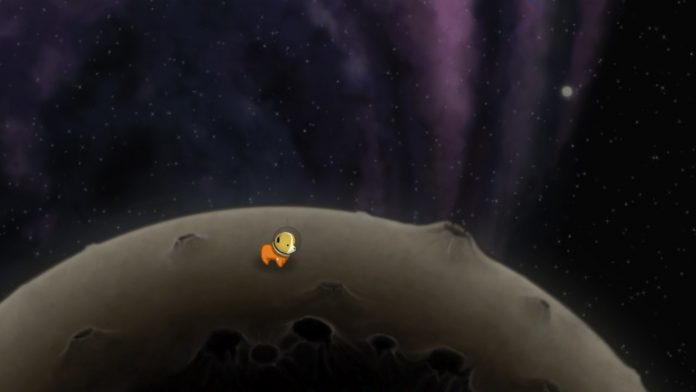 With its distinctive visual approach and amusingly oddball characters, Tales of Cosmos isn’t lacking in charm. But this intergalactic adventure’s frustratingly obscure puzzles and tedious travel mechanic detract from the game’s initial appeal.

What it would be like to travel beyond our solar system? Would such an experience be as wondrous as some have suggested? Could travellers encounter astonishing new forms of life and unimagined interstellar phenomenon? Or might it be a terrifying excursion into terror? Would the hapless astronauts be driven mad when the blackness was sent asunder and a vast cycloptic eye opened in front of them? My money’s on the latter but the prospect hasn’t dissuaded Perseus and Gagayev, the stars of Tales of Cosmos, from venturing into the unknown.

While these two animal astronauts don’t run into a colossal Lovecraftian horror, they do manage to fly their ship into a mysterious energy field. Crash-landing, they find themselves stranded on a rather sparsely-populated planet.  You take on the roles of the astronauts: Perseus, a small dog, and Gagayev, a wrench-wielding monkey. It’s up to you to disable the energy field and help them find their way back to a more hospitable region of space.

At least, that’s what I was able to establish using a great deal of mental extrapolation. Tales of the Cosmos‘ plot is a little threadbare which, coupled with the game’s somewhat abrupt ending, suggests that it was initially conceived as an episodic series. There’s relatively little plot exposition between the opening section and the game’s ending. 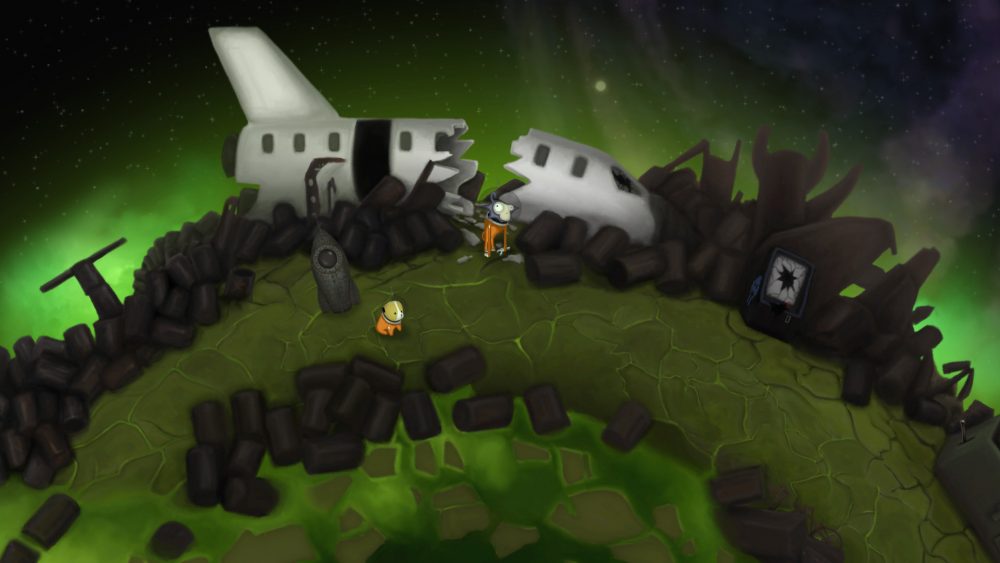 Nevertheless, it’ll be a good few hours before you reach Tale of Cosmos‘ conclusion.  A more pressing matter is figuring out a way to depart your initial planet, the emerald-tinted Chlorine Beach. This sparsely-populated locale serves to introduce you to both the game’s attention-grabbing graphical style and its point-and-click mechanics.

For the most part, you use Gagayev to collect and manipulate objects and Perseus to examine items or engage in text-based dialogue with the occasional character that you stumble across. The NPCs are an odd bunch and include an alien veteran, space-travelling mice and more. The game is unlikely to make you laugh out loud, but its characters and locales are quirky enough raise a smile. Though the focus is on puzzle solving rather than enaging in meaningful dialogue with these characters.

Tales of Cosmos’s superbly animated sprite-based graphics bolster its appeal.  Even the duo’s idle behaviour is endearing.  I defy you not to grin when you see Perseus fogging up his helmet with his canine breath. And, despite his predilection for hitting inanimate objects with his wrench, his simian sidekick Gagayev is equally as agreeable.

While Tales of Cosmos is undeniably charming, it suffers from some pretty significant problems. As I progressed, I stopped admiring its aesthetic and start grumbling at the frequently baffling nature of its puzzles. It’s not merely that the puzzles the game presents you with are complex; many are downright illogical. For example, there’s a point in the game where you need to power up an electrical device in order to obtain another item. However, there’s an electrical storm in close proximity to the device.  How might you proceed?

You might assume that you need to set up some sort of lightning rod style apparatus to harness the electricity. This is not the case. Instead, you need to travel to another planet and capture a mechanical bird. The bird, as it turns out, is actually some sort of robotic winged battery. Once you’ve captured the bird you can use it concert with the storm, to power up the device in question. But there is absolutely nothing to indicate this is the bird’s function before you capture it. 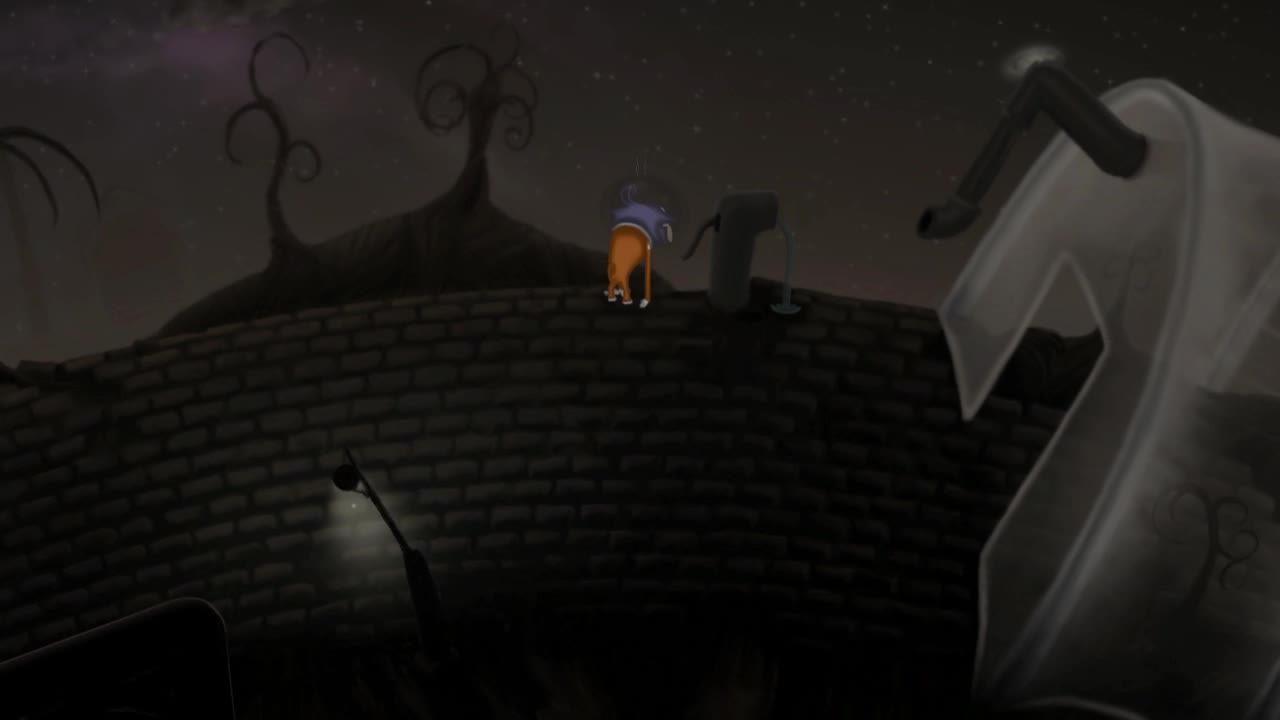 The game’s designers were likely trying to ensure that the puzzles had the same air of wackiness that permeates the rest of the game, but as a result, many of them end up being infuriating. Even the NPCs you come across don’t provide much of a distraction, often serving as just another part of a puzzle. You may also may find yourself missing objects because they appear to be part of the scenery.

The game does indeed sport several other laudable features. Tale of Cosmos‘ ambient music is suitably understated and serves to compliment rather than drown out Perseus and Gagayev’s cosmic journey. Surprisingly, the game also comes with a level editor,  albeit a fairly user-unfriendly one. Another intriguing feature is that the planets rotating beneath the characters feet as they move, the camera remaining fixed.

Yet Tales of Cosmos’ non-linear nature further ups the game’s frustration factor.  Once you’ve constructed a spacecraft to escape the first location, you’re granted access to seven other planets.  Since a puzzle on one planet may require an object from anther planet, you spend a significant amount of time flying to and fro. But, to the game’s cost, travelling between planets is an exercise in tedium.

The game depicts local space as featureless void, with no objects to avoid or enemies to fight. This might be technically accurate but it doesn’t bolster the game’s entertainment value.  In total, I spent an hour just holding down the mouse button as my spaceship chugged towards its destination.  True, there are a few puzzles that are genuinely enjoyable. These are often the ones that involve using switching between the two protagonists at the appropriate moment.  But these are few and far between.

Tales of Cosmos is a game which, with a little more thought and attention could be a joy to play. Its frustratingly obtuse puzzles and repetitive space travel eclipse the game’s enjoyable moments. Appealing as Tales of Cosmos may initially be, it remains disappointingly flawed and is best left to drift through the ether.

Tales of Cosmos is available on PC.