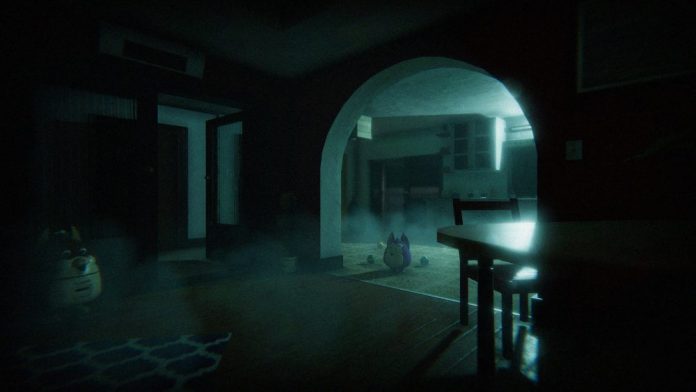 While Tattletail takes its cues from Five Nights at Freddy’s, it neverless offers more than just jump-scares. Terrifying and tense, this horror title will ensure you never, ever turn your back on a Furby again.

Created in the late nineties, Furbies were marketed as electronic pets, chirping happily whenever they were paid sufficient attention. But there was something off about them. For a start, early Furbies had no off switch, meaning they were always active. The internet is awash with tales of individuals who were rudely awoken by their child’s ill-advised Christmas gift chittering away in the darkness.

As if this behaviour wasn’t disturbing enough, they would communicate with each other in their own cryptic language. I remain convinced that they were secretly plotting to overthrow their oblivious owners. Luckily, this catastrophe was averted when they fell out of public favour a couple of years later. Though now they’re back, and it can only be a matter of time we hear the march of their tiny feet and feel the sting of their beaks as they tear through our flesh.

However, there remains one brief ray of hope in the form of Tattletail, a game which seeks to educate the public as to just how malevolent these furry monstrosities are. Created by Waygetter Electronics, this horror title admittedly doesn’t mention Furbies by name, referring to them as Tattletails. The similarity can’t be denied though; the game will instantly resonate with any nineties child who sensed the menace behind those plastic eyes. 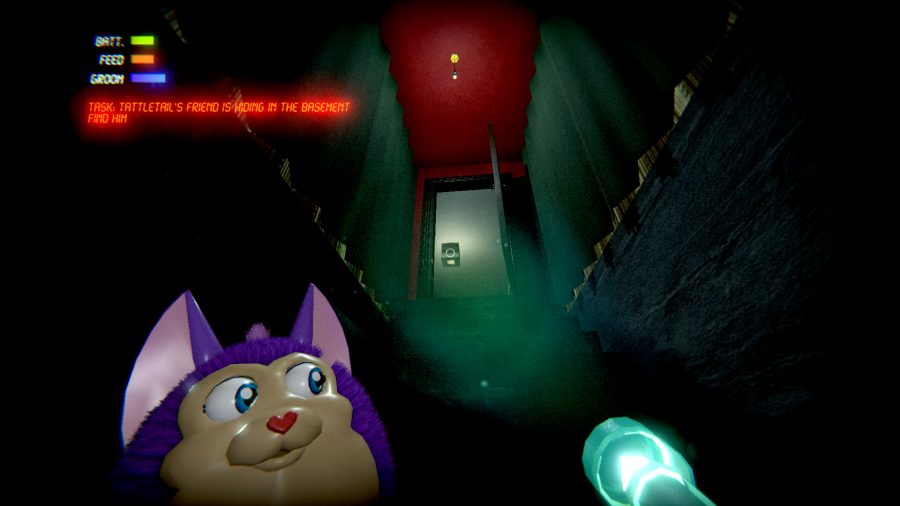 Tattletail’s location is rather unassuming: a suburban domicile complete with all the usual fittings and fixtures. But viewed through the eyes of the game’s juvenile protagonist, it becomes an altogether less welcoming place. True, Tattletail isn’t the only horror game to cast you as child, but it also subtly hints that there’s something amiss with the child’s home life. Couple that with the audio cues that play as you roam around the darkened house and you’ll be on edge even before you’re introduced to the game’s antagonist.

Taking place in the run-up to Christmas, the game has you sneaking out of bed in the middle of the night to take a peek at your presents. Unsurprisingly, the present in question turns out to be a Tattletail. While the game’s environmental graphics aren’t going to win any awards, Waygetter Electronics have done a stand-out job of emulating the Furby’s cute-but-disturbing appearance. Equally offputting is the way that, over the course of the game’s five nights, your Tattletail’s sporadic utterances become significantly more sinister. Hearing the words “You’re in trouble now!” leap from my electronic companion’s lips sent a shiver down my spine.

There’s also something faintly perturbing about their demands of being fed, brushed, or being recharged. Fail to keep them happy and they’ll become much more vocal. Just why does an electronic toy need to eat real food from the fridge anyway? Though I did let my Tattletail’s battery run out just to hear the horrifying way its voice slowed down.

Despite their innate creepiness, the Tattletails themselves aren’t your primary foes. Instead, your nemesis is their malevolent matriarch, Mama Tattletail. Each night you’re assigned one or more tasks to complete before you can safely return to bed. Said tasks may involve something as simple as just playing hide and seek with your Tattletail. But from the second night onwards, Mama starts to turn up. Her appearances become more frequent as the game progresses and, by God, she will give you nightmares.

She’s not that disturbing to behold, though most of the time you just see her glowing red eyes. Rather, it’s the way that she hunts you that’s so terrifying. She has the power to extinguish what meagre sources of light there are within the house, as well as the flashlight you carry. You can be standing a room and suddenly be aware that, at the opposite end of the room, the lights are starting to flicker. Suddenly, your heart’s in your throat as you realise… Mama’s here. 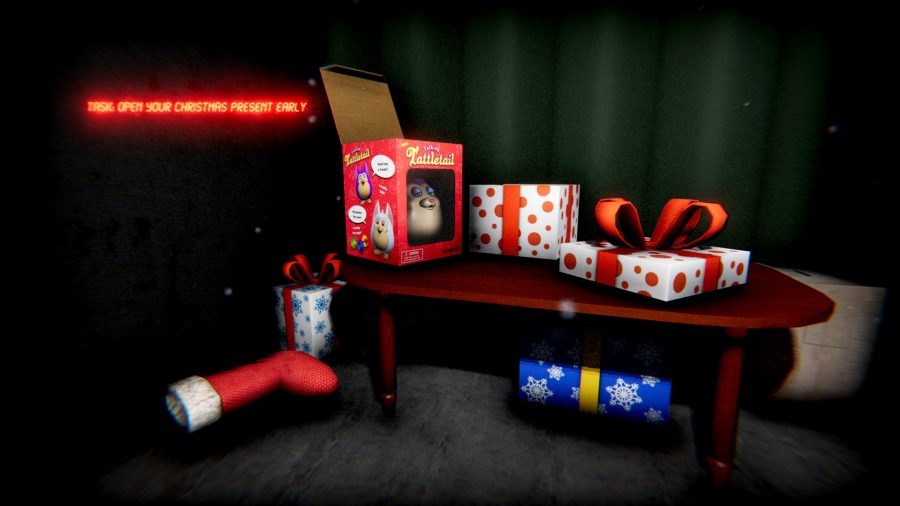 Running’s not an option, since fleeing makes a lot of noise. As a result, encounters with Mama are absurdly tense. When I first ran into her, I backed into the corner of a room hoping to elude her. Things were going well until my Tattletail started complaining that I hadn’t fed him. Heart pounding, I slowly moved towards the kitchen, hoping I’d be able to reach the fridge in time. But it was too late for me, and I’m sure the neighbours heard me yelling.

The carefully measured pace of these encounters really ups the game’s fear factor. One of Tattletail’s key strengths is that when you lose the game, you’ve only got yourself to blame. Failure never feels random as it can in some other horror  titles. Maybe you die becase you’ve forgotten to keep your Tattletail fed, or foolishly decide to bolt for the door. On one occasion, I was so unnerved that, in Mama’s presence, I noisily shook my flashlight to recharge it rather than stay sitting in the darkness. You can guess how well that went. Equally effective – and traumatising – is the steadily rising musical crescendo that accompanies Mama’s appearances.

That said, the game’s final night is something of a letdown. For narrative reasons, you no longer have your Tattletail with you which means that avoiding Mama becomes a lot easier. Given that she can no longer zero in on your Tattletail’s noise, she becomes more of an irritation than an actual credible threat. In addition, the game would benefit from an additional difficulty mode, making the game more challenging on a second playthrough. As is, once you’ve finished the game once, you’ve gained a pretty good insight into how Mama ‘works’ and so she, again, becomes less threatening. Considering the game’s asking price of £3.99/$4.99 however, it’s hard to complain.

Tattletail is a game that, regardless of whether you lived through the nineties or not, will scare the living daylights out of you. While it’s by no means perfect, it goes beyond mere jump-scares and delivers an experience that is genuinely and persistently frightening.

And it teaches any parent a valuable lesson, which is: don’t buy your child a Furby; get them something less dangerous instead. Like a chainsaw. Terrifyingly good stuff.

Tattletail is available on PC.