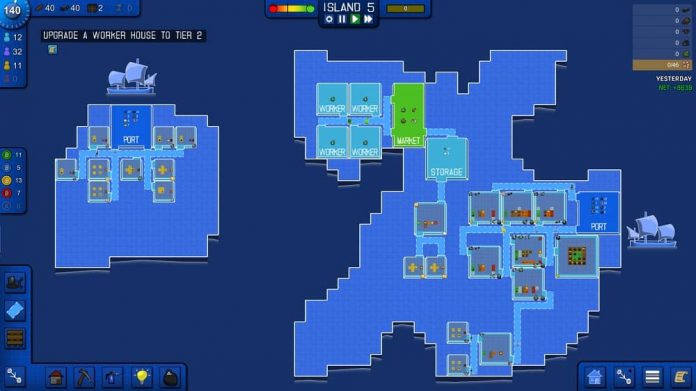 Blueprints were first put into use in the mid-19th century.

Originally created to replicate design plans for technical drawings, they have since been replaced by more modern methods. Still, ‘blueprinting’ remains a term for drawing up or planning out an idea, making Blueprint Tycoon a fitting name for a settlement building and management game.

If you like story rich games, then Blueprint Tycoon isn’t for you. However, what it lacks in story it more than makes up for with a whole lot of management elements for you to explore. The idea is simple: gather raw materials, produce goods, and sell your product for a profit. This simple idea quickly expands into a nearly overwhelming network of resources, workers, and trade routes spanning multiple islands.

Like any game, Blueprint Tycoon begins with a tutorial. This tutorial, however, is rather complicated, and almost does more to confuse the player than teach. What’s more, there’s no real differentiation as to when the tutorial ends and the game begins. It almost seems like you never begin playing a game; you just continue completing basic tasks to progress the longest tutorial known to man.

Games by definition have a way to win and a way to lose, but there is no way to lose in Blueprint Tycoon. If you don’t produce enough goods, you’ll run out of money. If you don’t feed or pay your workers, your reputation will go down. As your reputation lowers, workers will stop working, building will collapse, but you’ll never technically fail. Even with zero reputation, zero funds, and a negative net of thousands of dollars a day, the scenario will continue infinitely. There is also no option to restart a scenario, so if you manage to back yourself into a corner, you have little option but to grind their way back into it (or, you know, turn off the game). 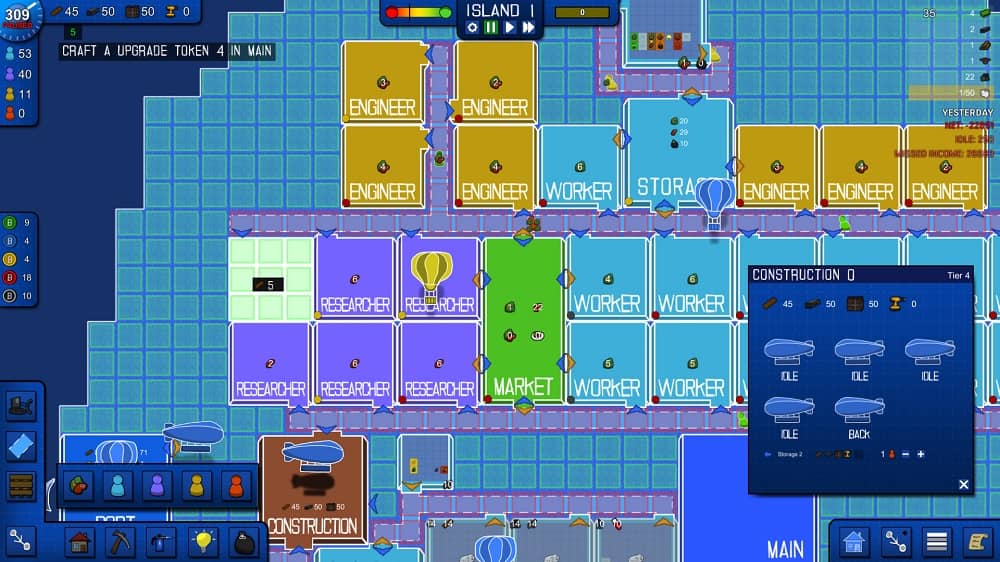 The one mechanic that sets Blueprint Tycoon apart from other management games is its actual blueprint system. Almost all buildings in the production line have a blueprint associated with them that dictates the time it takes to complete their specified task. These blueprints can be modified by the player to make them more efficient, and save time in the production line. In theory it’s a great idea, but in practice, it leaves a lot to be desired. The actual customisation is very limited in what you can do, and generally isn’t very fun. Even if you finds the most efficient method, your production will seemingly only be marginally improved. And most confusing is that the core mechanic, one of the only things that makes Blueprint Tycoon unique, can be completely avoided throughout the game.

The art style matches the name of the game, with most of the art taking on a blueprint feel. Though the style, like the rest of the game, feels like a good idea with poor execution, resulting in lacklustre results. Blueprints are known for being very intricate and exclusively blue and white. But the art style here is very simplistic and overly colourful. Some of the colour can be excused, as it would be nearly impossible to tell buildings and resources apart if everything was blue. But when a hot air balloon is upgraded for instance, instead of becoming more sophisticated, it merely receives a palette swap.

Blueprint Tycoon finds itself in a tough spot when it comes to music. You spend the majority of the game on a single screen, making it difficult to keep the sound track fresh and varied. The music that was included in the game is respectable and even catchy at times. However, there just isn’t enough variety to survive the hours of gameplay. The music also frequently cuts off the previous track, or worse yet, doesn’t play at all. You’re probably best just to mute the game and listen to your own music as you play.

At this point it may sound like Blueprint Tycoon is full of issues and isn’t really worth looking into. But that’s not really the case. It’s an entirely fine game. If you’re a fan of management or simulation games, it’s worth investigating, especially with such a cheap price tag. The only big issue with Blueprint Tycoon is that it just isn’t particularly fun. Without a way to lose, there’s no real challenge. Completing tasks doesn’t feel satisfying because there’s no time limit or difficulty. It all just feels like a long, somewhat tedious, tutorial.

Blueprint Tycoon is available on PC.