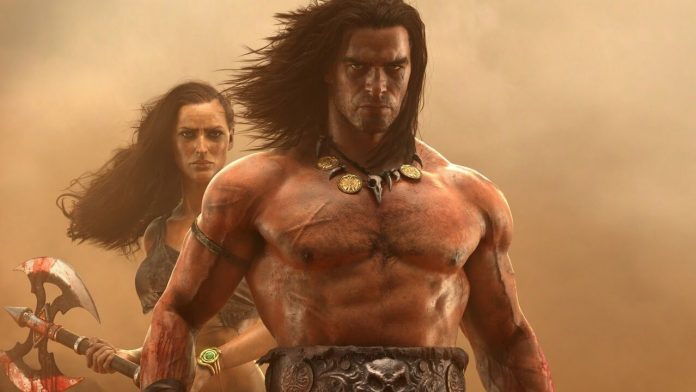 Let’s start out with a little bit of context. Conan Exiles was made available through Steam Early Access on 31st January 2017. At time of writing, the game has been out for two weeks and, to my certain knowledge, has been updated 11 times. That’s almost one a day since launch. And you can totally play the shit out of it.

Context is totally necessary in such an early preview, especially given the fact that Conan Exiles currently has over 4,000 user reviews on Steam (69% of which are positive) and most of the negative reviews are for issues which have since been fixed – or at the very least, addressed by the developers. Now, the reason I’m telling you this isn’t because I want you to like Conan Exiles and it’s not because I’m going to go easy on it. The reason I tell you this is that anything that I might say, either negative or positive, might be totally outdated in just a few days’ time if the current rate of iteration continues as it has so far. Though, that’s not to say that that’ll happen, either.

With that out of the way, let’s talk Conan Exiles.

“When you start a game of Conan Exiles, you can create your own server or join one that someone else has set up… just about every server [is] unique so you can play the game in the way you want to play it.”

Conan Exiles has been developed by Age of Conan creators Funcom, and it’s fairly obvious why they chose this particular IP to head into the untamed wilds of sandbox gaming with. Being drawn from Robert E. Howard’s Conan series – more specifically in his Hyborean Age timeline – Conan Exiles continues in the same design trend as Age of Conan and can be seen as a sort of spiritual successor to it. Not only that, but Funcom have invested a fair amount of time wading through the lore of this ancient world and it would be madness in the extreme not to harness that knowledge and bring it to the attention of a whole other group of gamers, right?

Watch our video preview of Conan Exiles below:

Being that it’s the first of Conan Exiles’ straplines, it seems fitting that we take a look at survival in the Hyborian wastelands first and, as with many of the game’s current features, survival is much more game-y than simulation-y. Conan Exiles presents yet another iteration on the hungry/thirsty/tired triumvirate of human need and not much more past that, really. Eat food to not be hungry, drink water to not die of thirst; it’s pretty basic stuff. And Conan Exiles uses it less of a demanding game mechanic and more of a means of forcing players to engage in the second of its straplines: building.

Building a base is essential to continued exploration in Conan Exiles. As well as being a safe place to hide from enemies, it’s probably where you’ll be storing your chests – while Conan Exiles doesn’t feature a limited inventory, your character does have a maximum carry-weight so you’ll need to use chests to store goods you can’t carry – and laying out your bedroll. Much as in Minecraft, you’ll use your bed to save your progress but, unlike in Minecraft, Conan Exiles lets you camp out under the stars if you so choose. Also, dying in Conan Exiles will return you to your last place of rest but, if you just made a cheap, plant-fibre sleeping mat, it’ll disappear and you’ll revert back to the previous save location if you die again.

“Conan Exiles really is good fun to play. It’s entertaining, it’s engaging and it’s actually quite interesting. As Funcom continue to work on the game, I’m sure it’ll be one to watch as release time rolls around.”

The actual building mechanic itself is much like that of Fallout 4 or Ark: Survival Evolved. You craft individual pieces of a structure – foundations, walls, doorways, roof tiles, etc. – and lay them out on a grid, foundations first and build up from there until you’re happy. At this stage, Conan Exiles features quite a diverse recipe list but you won’t need that many pieces to establish a base. You will need to craft certain other items in order to unlock additional crafting choices, though; things like the armourer’s table, the forge and the carpentry table all allow you to create additional things for your character.

At the moment, building feels like the most solid of the game’s mechanics, though it seems like a missed trick (to me, at least) to have the character just unlock new recipes as they level up – having to work harder to unlock more diverse recipes, actually encountering certain objects or finding plans or descriptions out in the wild would have been a much more fulfilling and interesting way of growing your repertoire but, for now, you just pick what you want to learn from the tree each time you gain a level.

It’s not just building materials that you’ll be crafting though, as Conan Exiles’ third strapline, ‘Dominate’, might suggest, you’re going to need some sharp pointy things to wave at the wasteland’s beasties if they get a little too friendly. There’s plenty of weapon variety and you can level your character to match in true RPG style but, while Funcom are obviously aiming for that Skyrim feeling, combat falls a little short of the mark. 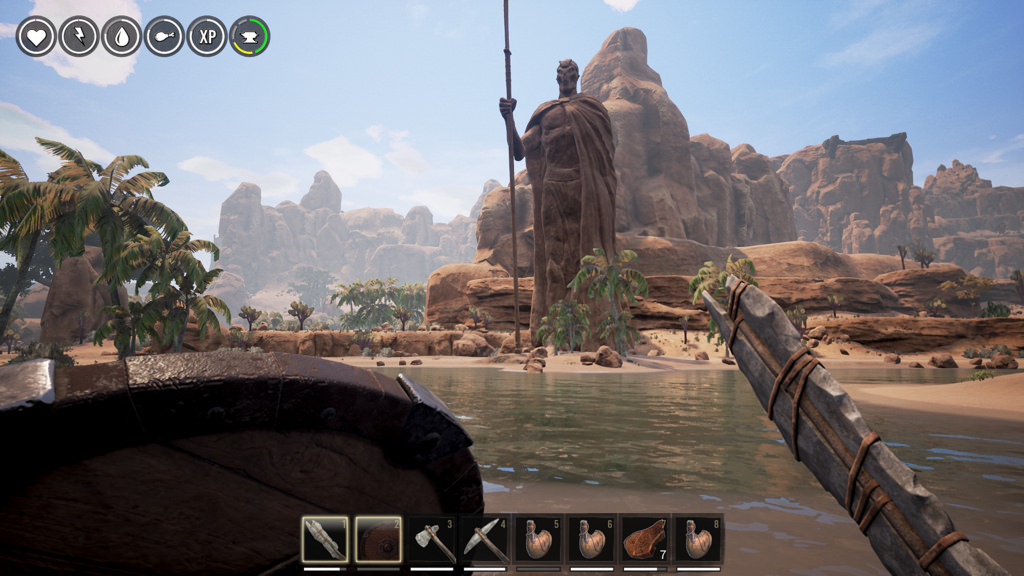 I didn’t encounter any magical spells during my time with Conan Exiles, nor did I work my way up to being able to summon an avatar of the god I worship (because that’s actually a thing), so I was left just swinging my stone sword around and blocking with my massively ineffectual shield – which breaks after just a few hits – and it was rather boring. The feedback, both visual and audible, was rather lacking and, while you can do a charged attack with the sword, there seemed no real advantage in dodging or timing attacks or in focussing hits on a particular body part (I was hoping to cleave heads from shoulders in truly brutal barbarian style). Just swing and hit and hope for the best. Currently, it’s the game’s most lacklustre and unpolished mechanic and the one most deserving of a little TLC from the developers as Early Access moves forwards.

Okay, you’ve read this far and I’ve not even touched on the one thing that probably everyone has heard about Conan Exiles. Cock. Well, cock and boobs, to be more precise. Conan Exiles has them. There are sliders. But nudity in Conan Exiles is, actually, treated pretty maturely. Sure, it wouldn’t hurt not to have it in there but starting out the game naked actually drives home the fact that you’re all alone, in the desert, with absolutely nothing but your wits to help you survive – well, apart from a shiny bracelet that kills you if you take it off. The game is basically saying: “We all start out naked. We’re all born equal. Then we grind bushes for plant fibre, make some pants and a shirt and forget all about it.” Seriously, it’s never brought up again. Until your trousers get damaged in combat and your avatar is left wearing just a shirt, underneath which you can now see the gently swaying tip of your compensatory John Thomas. So, slightly funny then.

“The game is basically saying: ‘We all start out naked. We’re all born equal. Then we grind bushes for plant fibre, make some pants and a shirt and forget all about it.'”

There’s one thing, though (apart from the fact that, as I’ve said, this is Early Access), that can totally change everything about the game: server settings. When you start a game of Conan Exiles, you can choose to play solo or online. Either way, you can create your own server or join one that someone else has set up. As a server admin, you have control over just about every aspect of the game: day/night cycle length, yield from resources, XP gains, crafting times and more. I managed to get as close as you currently can to a creative mode by giving myself plenty of daytime with an incredibly short night, huge resource gains from all types of gathering and dramatically increased XP generation (meaning I could learn all of the recipes in super-quick time!) and I also joined a server which had reduced yield and a more even day/night cycle, making it much harder to gather the materials required to build with. This makes just about every server unique so you can play the game in the way you want to play it.

Conan Exiles really is good fun to play. It’s entertaining, it’s engaging and it’s actually quite interesting. As Funcom continue to work on the game, I’m sure it’ll be one to watch as release time rolls around – especially since Funcom have announced full mod support with a dev kit and access via Steam Workshop. Sure, they’ve got some work to do but as opposed to this being a paid beta-style Early Access venture, it feels much more as though Funcom have learned from their mistakes with releases in the past and, this time, want to make sure that they engage and converse with their audience right from the start to make the game that they want to make and the game that we want to play.