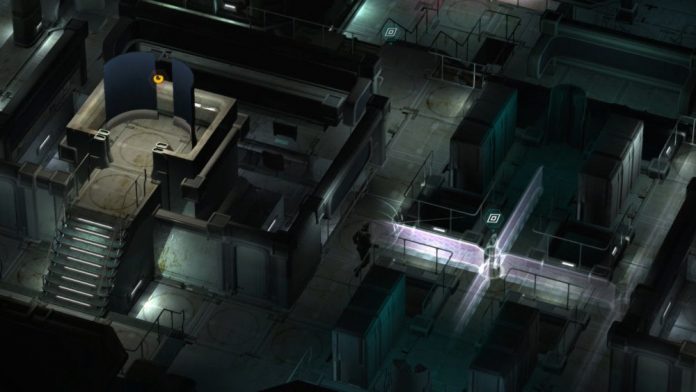 Like most games, Divide actually starts out pretty well and shows plenty of promise.

The story is absorbing, the voice acting seems fine – good, even – and the overall look of the game is pretty solid. Spend a little time actually playing it, however, and it quickly devolves into a frustratingly slow, repetitive, glitchy mess.

Taking control of Divide‘s main character, David, we begin our story aboard a train with his daughter, Arly. They’re heading to a meeting set up by one of David’s late wife’s co-workers. The meeting is shrouded in secrecy, raising questions that do a great job of drawing you into the narrative. Heading home from the meeting where he was given a briefcase, David finds it contains a pair of fancy-looking contact lenses. Wearing them activates a “SOLUS” system, which in turn reveals messages hidden around his house. Divide builds suspense, mystery and intrigue by giving you just the right amount of information at just the right time and that’s the case throughout the game.

It never feels as though you’re out of the loop, either. Refreshingly, Divide doesn’t mince the narrative at all; it’s always clear who or what is being talked about, so you never feel lost in the plot. It’s a bit like reading a book with really short chapters; it makes you feel smart.

Unfortunately, the same cannot be said for the actual gameplay and its objectives. The setting is, for the most part, a large industrial facility with long and almost identical corridors and very little else. Games like Grand Theft Auto offer you landmarks so you can learn the map and you feel like you know your way around pretty quickly. Divide doesn’t give you any such things, so pretty soon you’ll be lost and forced to use the almost useless map. 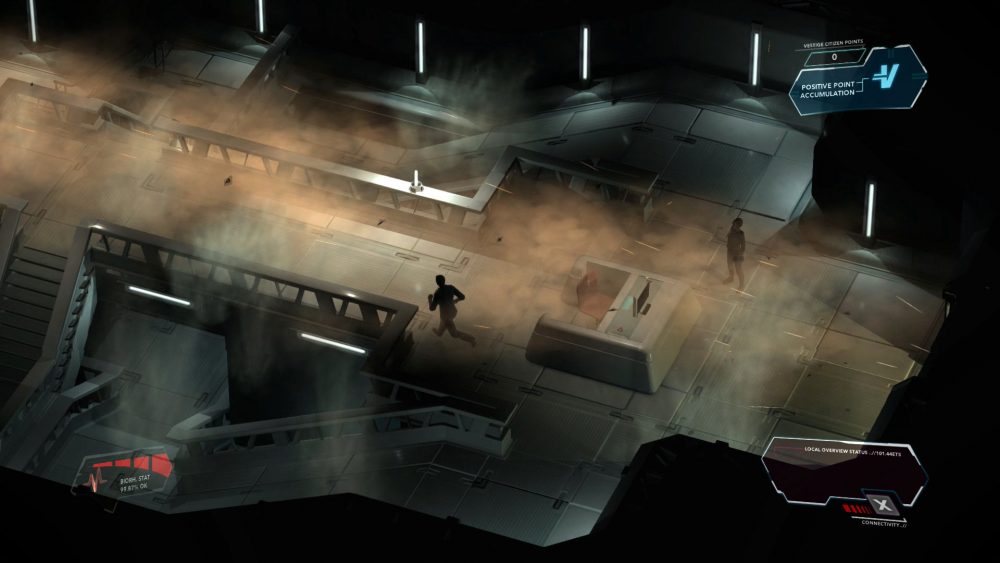 Each area of the game requires the same basic mechanic: David’s female NPC buddy, Eris, has to access the computer network to create “Hashes” which allow you to unlock certain things, while David finds the “Control Locus” and uses the Hashes to unlock all of the PCs in the local area. These Hashes started off pretty rare, dished out at perhaps two or three at a time, but I stumbled across a machine that gave me over 600 at once; if that was a glitch or not, I still don’t know. Anyway, some of these PCs will have mission-critical information on them, so you must search them all until you find whatever it is that you need, wherever it may be. The main issue here is that you’ve passed by most of these identical computers already, but they were locked, so you’re just going over old ground and I really can’t emphasise enough how dull that is. Even then, there’s nothing to indicate which PC is the one you need, so you end up checking literally dozens of them until you find what you’re after.

Some sections have enemies – either humans or robots (called “Autolabors”) – roaming around too, but instead of offering an extra challenge, they’re just an annoyance and they don’t feel like actual obstacles at all. Divide‘s enemies seem to just exist for no real purpose; robots are evaded easily enough by simply running past them, and humans, while a little trickier, seem to have just been placed in huddles to slow down your already-pretty-slow progression. The issue is that David can only survive two shots and enemies can seemingly fire as quickly as they like. You’re given a stun-gun to return fire, but aiming it is damn near impossible. When you undoubtedly miss, you’ll give the enemy a clear shot at you, likely killing you. You’ll be sent back to the last save point, which can be anything from one to over ten minutes before, with the latter obviously being quite frustrating. Ten minutes doesn’t seem a lot, but when it’s ten minutes of pressing R2 to look at computers, it gets old pretty fast.

Well, that’s if your save loads at all. This seems like a good time to talk about glitches. Firstly, yeah, I lost about 30 minutes of gameplay due to a randomly corrupted save. Later, about four to five hours in, I encountered a game-breaking glitch that forced me to start over, totally fresh, from the very beginning. Then there are Divide‘s smaller, not game-breaking but still irritating issues: getting blocked in a room by an NPC or a malfunctioning door, or where the isometric view is forgotten and you switch between the ground floor and upper floors unintentionally like you’re traversing some kind of M. C. Escher staircase, bending the planes of reality.

It’s not all bad though. The music, for example, is exceptional for an indie title. Dramatic swells at appropriate moments help to add to the majesty of certain shots and tension is created when the story requires. The voice acting is also (mostly) superb. David’s character especially is played exceptionally well, but does jar slightly with his companion, Eris, who sounds a little stilted throughout their conversations. The aesthetic is also an accomplishment. The graphics remain firmly rooted in reality, despite the setting, and the world feels solid and well-constructed. Every object feels like there’s a reason for it existing and there’s an exceptional use of light and shadow. 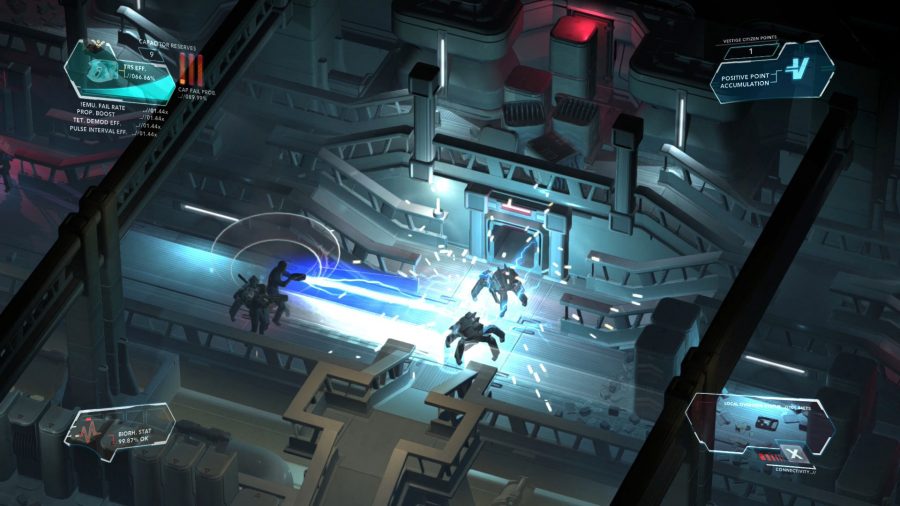 The trouble is that all the good voice acting and lighting effects in the world just can’t hope to make up for Divide‘s dull, dull gameplay. It just isn’t fun. There’s none of the joy of discovering little secrets or hidden jokes or references; there’s no joy of exploration – it just becomes a tiresome race to the finish.

Divide is a functional isometric adventure and little else. Its curious narrative and enigmatic characters can only do so much; for every genuine moment of intrigue there are a hundred other moments to be spent aimlessly wandering the endless, grey corridors, desperate for the whole thing to just end. Replay value is non-existent due to the very linear nature of the experience and the overall runtime is only lengthy due to repetition; a second play-through could easily be completed in less than half the time, depending on how many glitches you encountered. A little longer in development could have solved some of the major problems here, but short of creating a new game from scratch, I don’t see a way to save Divide, which is a shame. Hopefully Exploding Tuba’s next title will be what Divide was supposed to be, but I guess we’ll have to wait and see.

Divide is available on PlayStation 4.