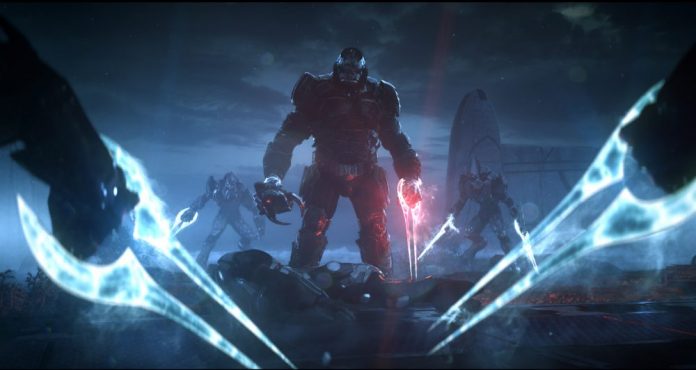 That’s rather a long time in the world of video games. After what for many fans will have no doubt felt like a gruelling wait, the sequel to the 2009 streamlined RTS set in the Halo universe is finally here.

Halo Wars 2 picks up some time after the events of the first game. With a new threat to humanity on the scene, Captain Cutter and the Spirit of Fire crew once again step into the fray to do what they do best: take care of business by shooting aliens from the land, air and deep space. Unfolding over 12 missions, Halo Wars 2’s story is actually an engaging and well-told yarn that uses beautifully created CGI videos to good effect, but unfortunately it’s one that still feels somewhat unresolved when the credits roll.

Once again playable solo or in co-op, the journey through Halo Wars 2’s six to eight-hour campaign follows in a similar fashion. There’s a nice range of objectives and environments forming the backbone of its missions, mixing shorter, more linear scuffles with occasional bouts of all-out war. But whilst it all feels like it’s building up to a final, epic, conclusive battle, the last mission just squanders any such momentum. It doesn’t sour the experience too much however; it just feels like a bit of a copout.

It’s a shame, as Halo Wars 2’s gameplay has certainly been improved, leading to strategical bouts that are as tense as they are rewarding, not to mention sometimes challenging. There are now two resources for you to manage rather than simply one, with generators now creating power instead of raising your tech level. Power nodes litter the maps, also boosting the power supply of the forces that control them. Meanwhile, the unit roster for the UNSC has been refreshed, while the new opposing ‘Banished’ forces borrow from the Covenant but feel largely original. It means that whilst the rock-paper-scissors system of the original Halo Wars is still in place, it’s not quite as clear cut, with new infantry units like the Cyclops being particularly efficient at taking out vehicles.

There are other sweeping changes too. You can no longer create up to three Spartans to fight for your cause; they’re now replaced with unique heroes who are provided to you in the campaign and are available for limited use in other modes. The Spirit of Fire abilities of the first title have also been reinvented and expanded upon as Leadership Skills in Halo Wars 2, allowing you to further support your forces with a range of passive buffs, units and direct assaults. In fact, it’s actually quite impressive just how much 343 Industries and Creative Assembly have done to reinvigorate and develop the gameplay seeded by the original Halo Wars whilst maintaining its identity and feel.

See our gameplay video of Mission 1 below:

Detracting from the experience are a few niggling issues that don’t cause too much concern but I feel should still be raised. For a start, the control scheme means it’s still awkward to accurately select a handful of units in a hurry, but admittedly there’s probably not much that can be done about it. What could have been better managed though is the difficulty of campaign missions, which feel a little uneven at times. My biggest bugbear, however, is the unit limit. Initially you’ll see that the limit is now 80 instead of 30 and think, “Oh, wonderful!”. Then you’ll realise that units such as a standard squad of marines now count as three unit points instead of one and be utterly deflated. Luckily you can increase the limit to 120 by developing specific base upgrades, but the disappointment will still slightly linger.

For many players, the online multiplayer features of Halo Wars 2 will be at the forefront of their minds, and I don’t think they’ll be disappointed. Eight maps are initially featured, most of which support full 3v3 gameplay across three varied match types. The standard Deathmatch is obviously the most basic of them all, requiring you to simply eradicate your opponents bases to win, whilst Domination is perhaps the most strategic, tasking you with capturing and defending towers to be the first to reach a specific number of tickets. Strongholds on the other hand has the potential to be pure bedlam, with players afforded unlimited resources as they vie for control of the most strongholds by the end of the match.

Whichever match type you choose, the tight map design means that the action is fast-paced, although that’s also because everything just does feel a little faster – from producing units to moving them around. Also, whilst Halo Wars 2 looks rather pretty for a console RTS, it’s nice to find that a smooth framerate has been given priority, keeping the whole affair hiccup and slowdown free. The most important aspect of any competitive multiplayer online game though is assuredly balance, and in this regard, I’ve certainly not yet discovered any causes for concern.

We’re not done yet though, as there’s an entirely new way to jump into some frantic Halo Wars gameplay too via a duo of new Blitz modes. Eschewing base building in favour of more immediate arcade-like action, both the standard adversarial and Firefight Blitz modes are great new additions to the Halo Wars 2 package, offering new and exciting ways to play. Taking place on small maps, units are instantly summoned to the battlefield by playing cards from your deck, but each requires a set amount of energy to be expended to do so. To further grow your army then, you need to resupply your store of energy by destroying canisters of it dropped onto the battlefield. Gathering energy distracts you from the main task at hand when playing Blitz however; capturing and holding bases. 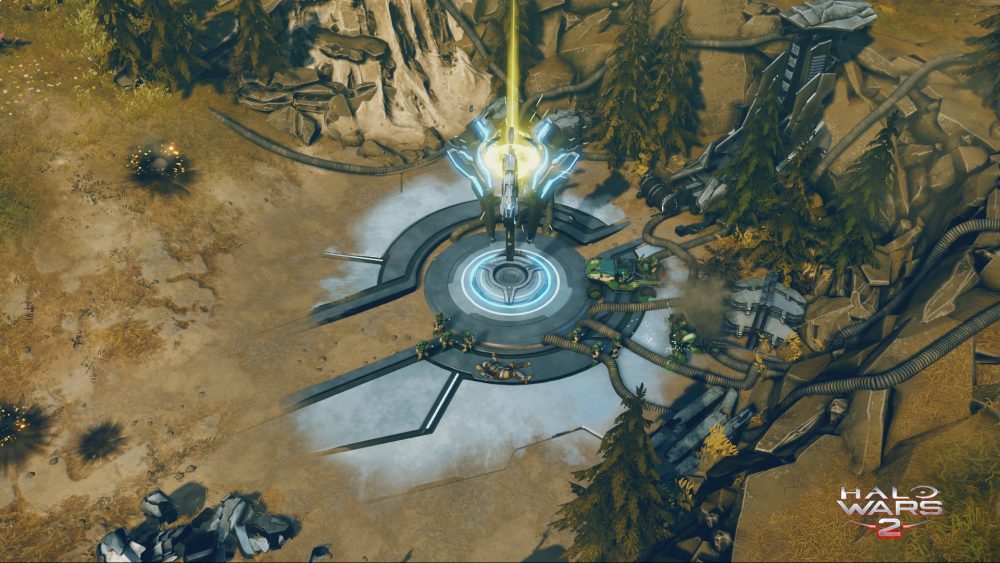 The standard adversarial version of Blitz essentially plays out like a simpler, faster-paced match of Domination, with both players battling for control of bases in order to reach a set number of tickets first. The solo and co-op Firefight mode however has you jostling with waves of computer controlled enemies, capturing and holding bases instead becoming essential to prevent a meter from filling up and ending your game. With Blitz card packs awarded for completing campaign missions and challenges, as well as available to purchase with real money from an in-game store, for many players the pursuit of building the perfect deck will become an obsession. In any case, there’s no denying that Halo Wars 2’s Blitz modes offer a fresh experience that is addictive and exciting.

It has some niggles here and there then, but on the whole, Halo Wars 2 is a fantastic follow up to a game that dared to bring together fans of both the Halo universe and real-time strategy. To all intents and purposes, it’s still a streamlined RTS experience, but it feels deeper, faster, and more refined. I suppose you could say it feels more mature. The variety of game modes and match types available also impresses, catering for those looking to play solo as well as co-operatively and competitively online in equal measure. It’s not a perfect game, but so what? Halo Wars 2 is hands-down the best RTS available on console, and a game that rightfully deserves a place in any thinking Xbox One owner’s library.

Halo Wars 2 is available on Xbox One and PC. Our review is based on the Xbox One version.