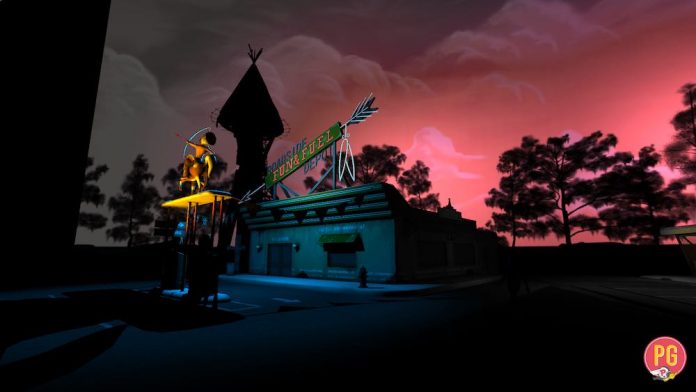 There’s one thing that Knee Deep certainly has going for it – and that’s the fact that it’s completely unique.

Video games and theatre rarely go together, but Prologue Games’ narrative-driven adventure squeezes them into the same box and shakes them around a bit. You see, the entirety of Knee Deep is a play: from elaborate ever-changing set designs, to stage direction and even some purposefully hammy acting, the game is set up as if it’s playing out to a live audience.

This fact alone makes Knee Deep instantly intriguing. While it sounds like a very bizarre concept, it actually works. It’s not always apparent, though, but a scene change will cut in where a mechanical backdrop moves into place, and a spotlight appears on a character to jolt you back into the knowledge that you’re not only playing a game; you’re also watching a theatre production.

The downfall comes in the “playing a game” part. Knee Deep is very light on actual gameplay. Think Telltale Games, with even less user input. For me, it wasn’t a problem, but some may find the more passive engagement a little too lax. You don’t even control the characters; the most the game asks you to do is make regular choices in regard to dialogue, giving the illusion that you’re driving the plot in a particular direction. There’s also a small smattering of puzzles to solve, but largely, you’re going to be sitting back, letting the action unfold in front of you.

In this regard, it’s a good job that Knee Deep‘s narrative is so engaging, right from the very moment the curtain raises (literally, in this case). Set in the fictional Southern American back-whack town of Cypress Knee, there’s an instant air of Twin Peaks here; an unsettling but altogether curious atmosphere that begs further investigation. The game wastes no time in unfurling the plot: straight away you find out there’s been a murder, and instantly you can’t help but get drawn in, wanting to know more about this heinous crime. 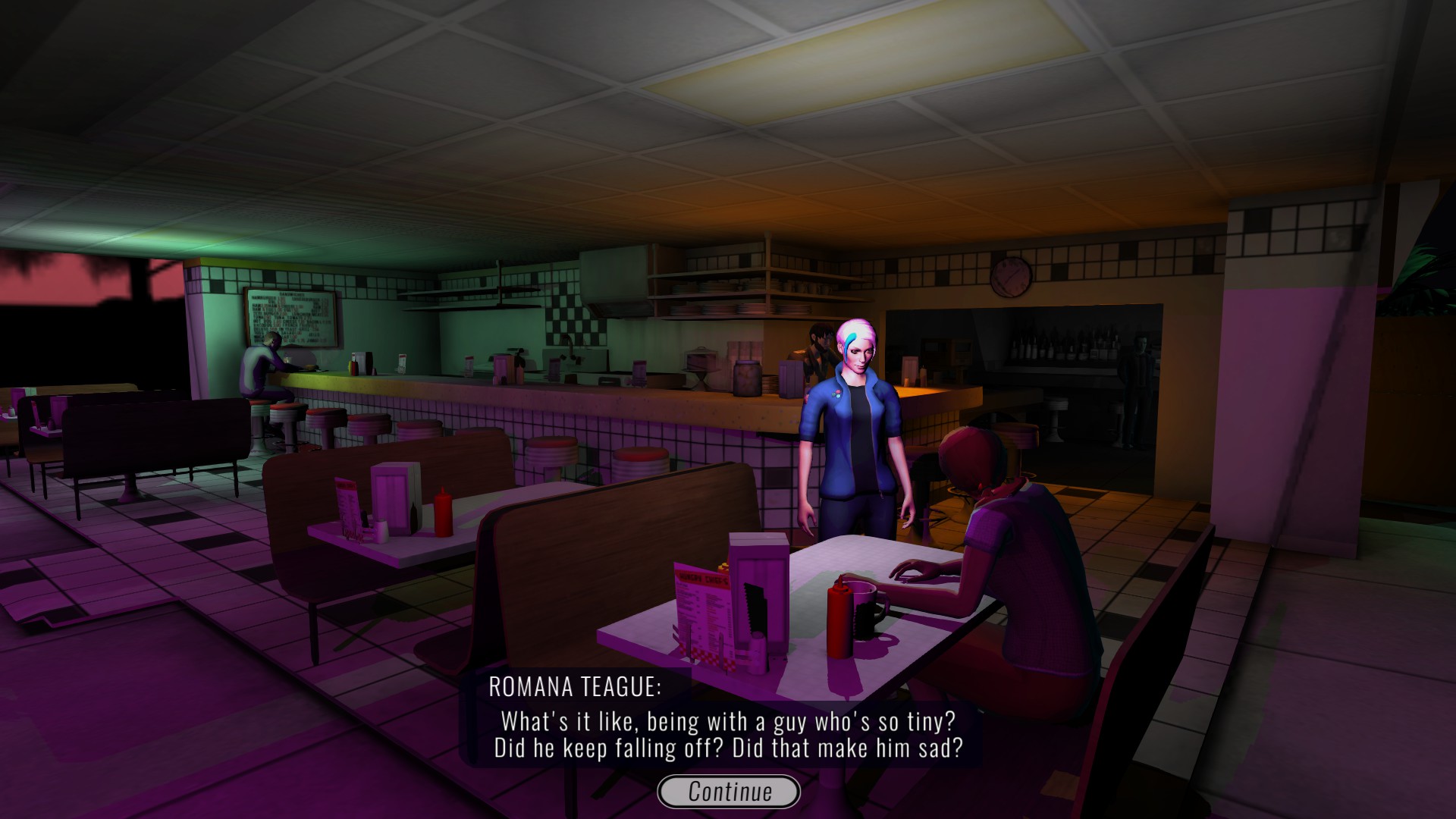 Knee Deep focuses on three main characters, each of whom you’ll have equal control of. Each is an outsider to the town in some way, sent to investigate the murder that’s taken place. First up is Romana Teague, a spunky showbiz blogger, followed by local news reporter and divorcee Jack Bellett, and finally K.C. Gaddis, a private investigator.

The three are investigating the same crime, but each place their own spin on it, initially dealing with the matter at hand completely unaware of the others’ involvement. Periodically you’ll have to select stories to spin for Romana and Jack, choosing whether you want to play things safe, add something of an ‘edge’ or be completely inflammatory. You’ll also have to choose a number of reports for Gaddis to submit to his superiors. While your choices are set up in a way that suggests the plot of the game will be affected, the changes are perfunctory at best; the overarching path of the narrative is very much set in stone and you can merely add a bit of flavour as you play.

Set out into three acts (this is a stage play, after all), Knee Deep takes around six hours to complete. The acts continue directly on from each other, although Act One and Two both have their own cliffhangers. The pacing and tension is, generally speaking, really good throughout, although it’s much more tenable in Act One where it’s setting up the story. In Act One, you’re still not quite sure what’s going on, and the build-up of suspense and intrigue is handled very well. As the story unravels throughout acts Two and Three however, it loses some of that hook – but that’s not to say it’s still not altogether engaging and enjoyable.

I think perhaps part of what makes Knee Deep‘s narrative so engaging is that the voice actors who tell it are all incredibly talented. For an indie title, it was a pleasant surprise to find the game had full voiceovers at all, and for them to be this calibre is a real bonus. Some of the supporting characters are suitably hammy – but considering the theatrical setup of the game, it’s entirely forgiven, and if anything, adds to the experience. The actors voicing the main cast do a brilliant job of bringing them to life with just the right amount of character. 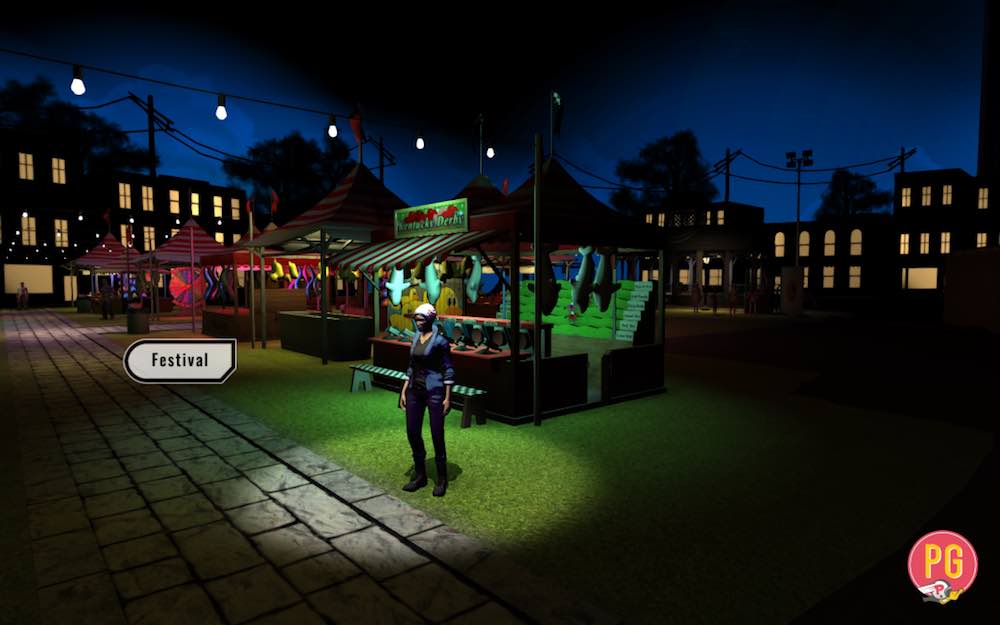 What you make of Knee Deep will depend entirely on what you are looking for from a video game. If you want something actively engaging, then this isn’t the title for you. But if you’re happy to let yourself relax and get lost in an intriguing, dark, sometimes funny and always mysterious narrative, then it’s definitely worth picking up. You won’t be blown away by its rather average graphics, nor will the gameplay engage you in any meaningful way, but if you enjoy a good drama with an air of David Lynch, then give Knee Deep a try.

Knee Deep is available on PC, PS4 and Xbox One. We reviewed the Xbox One version.