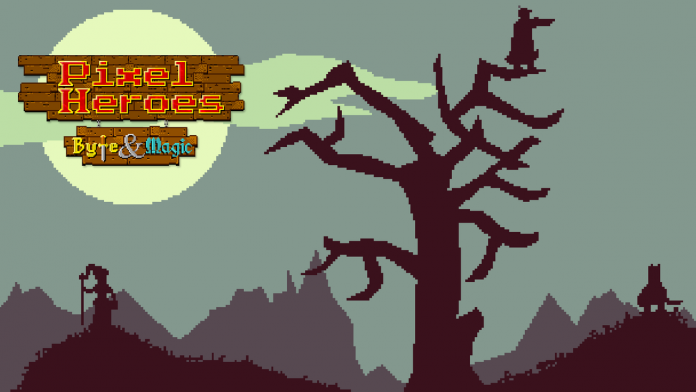 Pixel Heroes: Byte & Magic seeks to ape Rogue and other randomly generated dungeon-crawlers. But it omits the elements that makes those games so appealing and falls flat as a result.

Randomally-generated worlds! Procedurally generated levels!  These and similar phrases have been bandied about ever since the dawn of the games industry. But while random generation can enhance a game, too many developers, incorrectly, view it as a shortcut.

No Man’s Sky showed that having a limitless number of randomly-generated worlds doesn’t help if your game is fundamentally lacking in depth.  Likewise, it appears as if the creators of Pixel Heroes have attempted to use random generation to create a ‘dungeon crawler lite’. Unfortunately, in the process they have removed all the features that make dungeon exploration games so appealing.

As Pixel Heroes’ title suggests, you take control of a party of pixellated characters and send them out on a series of quests. The game’s overall look harkens back to days of the 8-bit era, as does the games’s soundtrack and effects. However, the developers have taken this graphical homage a little too far and have elected to have Pixel Heroes utilise a retro-styled 4:3 display. As a result, you’re left with blank bars at the left and the right, which is mildly irritating.

But Pixel Heroes: Byte & Magic‘s issues go way beyond its presentational quirks. While the game’s store page states that it contains roguelike elements, it entirely omits the dungeon exploration aspects that have come to define the genre. The game starts promisingly enough, with Pixel Heroes taking a refreshing approach to character selection: your prospective party members roam around the village pub, the usual mix of rogues, wizards, bards, fighters and so forth. Once you’ve chosen the three who will make up your band of heroes, you’re set upon by a doomsayer who mumbles some nonsense about a world-ending prophecy. In truth, Pixel Heroes’ plot is inconsequential and infrequently revisited. Dismissing his ramblings, you proceed outside to the village. There you find a citizen seeking to foist a quest upon you. Since you can’t leave this small hamlet without taking on a task, you really have no choice. 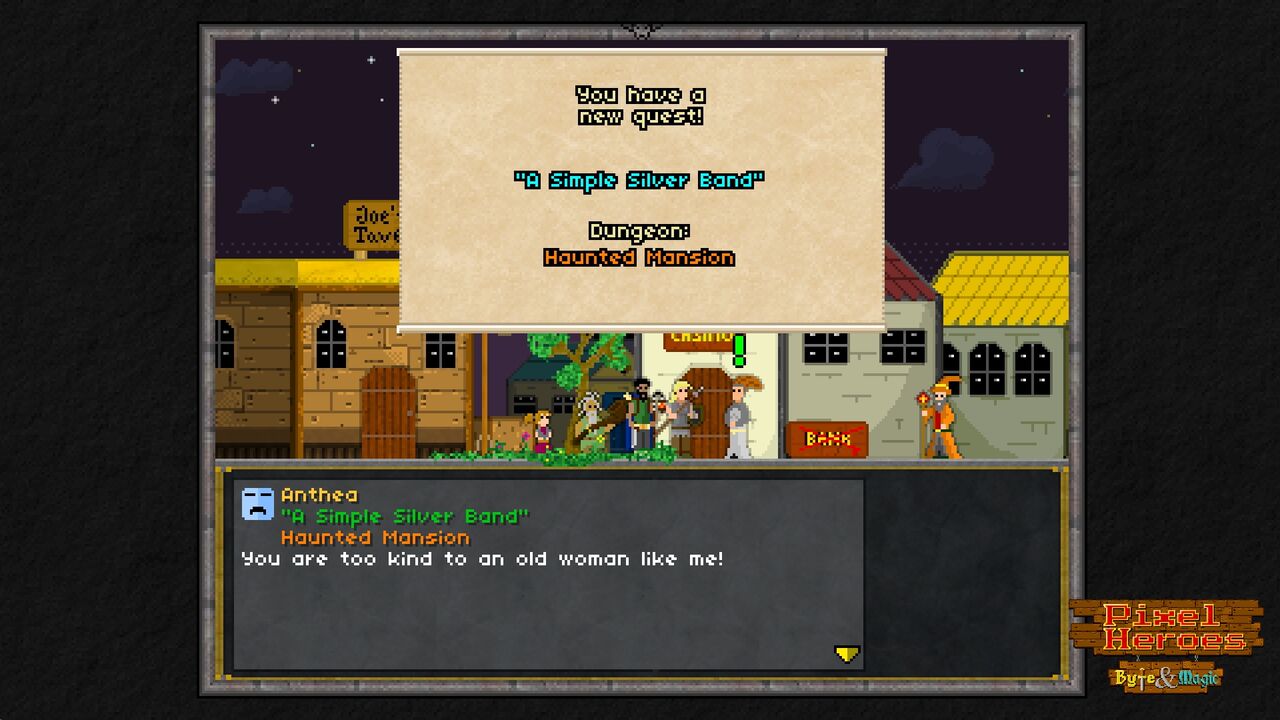 And that, in a nutshell, is its fundamental flaw. Pixel Heroes is so excruciatingly linear that it takes all but the most basic decisions out of your hands. All the quests are utterly linear and involve doing exactly the same thing. You’re robbed of the freedom to explore the land or any of the dungeons beneath and are instead marched towards your destination.

Even when you reach a dungeon, the rooms are arranged in a linear numbered sequence. Each room is filled with either a set of three enemies, or – on occasion – a trapped treasure chest. Eluding your foes is not an option, however. Feel like your party isn’t quite up to taking on a particular foe? Tough. You’re going to have to fight them anyway. In what must rank in one of the most insulting and infuriating design decisions this year, Pixel Heroes doesn’t allow you to retreat, even though you’ve just cleared a perfectly linear path on your way in. Your only option is to continue moving forward.

Combat itself is a relatively simple affair, based around the rock-paper-scissors model of monster-fighting. Though they vary in appearance, depending upon the level’s themes, your foes are all pretty similar. Some take more damage from spells and magical weapons, while others are more vulnerable to physical attacks. After each room you have the opportunity to level up your characters and rearrange your weapons as necessary.

Pixel Heroes’ combat system isn’t exactly revolutionary, but it serves its purpose. The problem is that the relentless conveyor belt nature of Pixel Heroes’ combat means that you’ll quickly become disenchanted with the whole affair. Reach the end of the seven rooms and you’re greeted by a boss monster. Defeat the monster and you head back to the village, whereupon you take on another quest. Thus, the whole monotonous grind begins again. 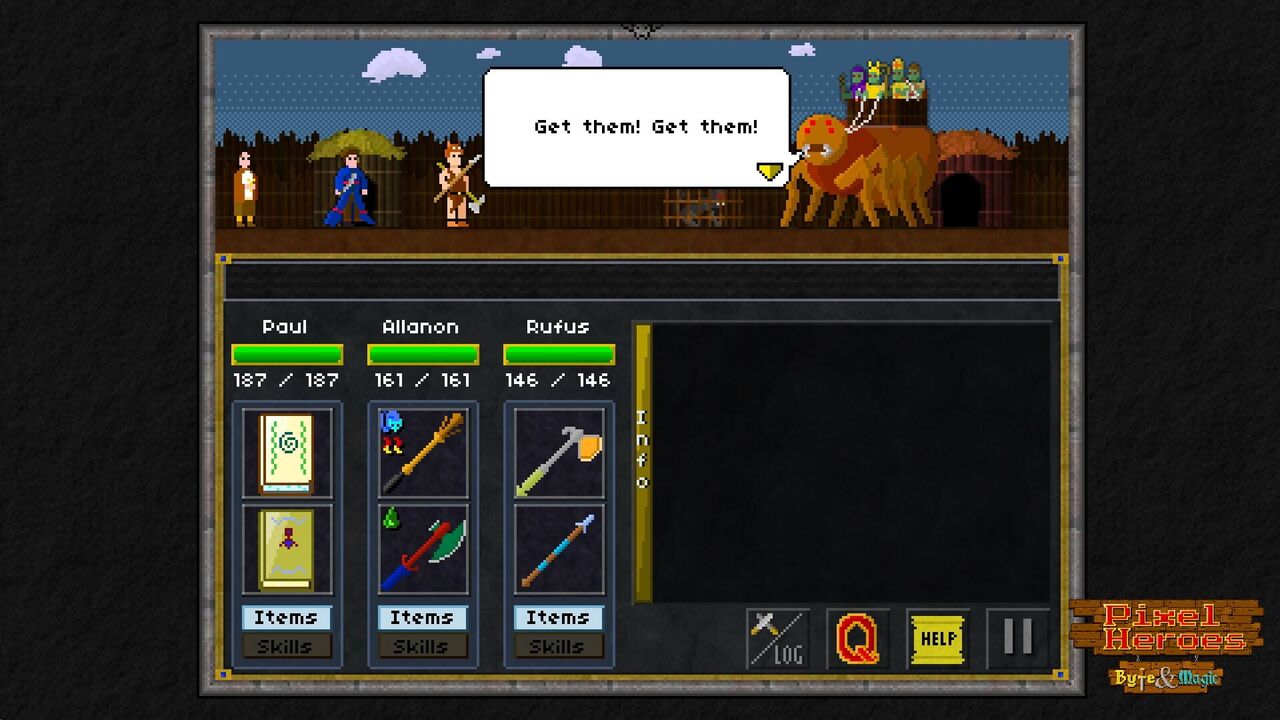 Should all your party members expire, however, it’s game over. Pixel Heroes features permadeath, meaning that once your party dies, you have to start the whole thing over again. Couple this with the game’s high difficulty factor and you’ve got a recipe for frustration. Not that you’re likely to feel any guilt about your characters’ demise; the lack of a coherent plot means that you never get attached to them.

Ultimately, Pixel Heroes: Byte & Magic has more in common with the likes of Oregon Trail, albeit without the prospect of your disposable heroes expiring from some terrible disease (though having your wizard die of dysentery might at least serve to alleviate the boredom). Pixel Heroes may offer a marginally different experience every time you play, but in practice, each playthrough is about as pleasant as a poke in the eye. Random but ridiculously repetitive, this deadly dull dungeon hack gives little reason to recommend it.

Pixel Heroes: Byte & Magic is available on PC and Xbox One. We reviewed the Xbox One version.