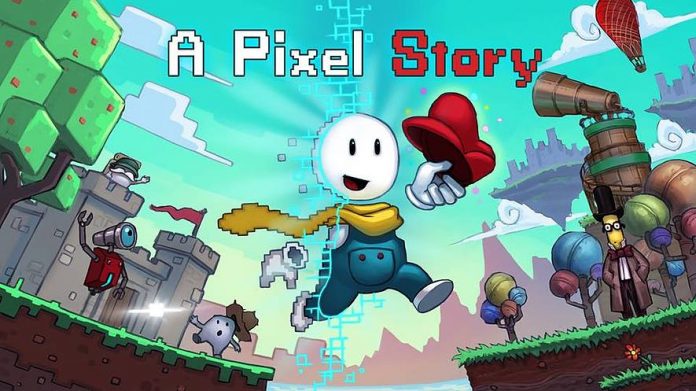 As someone who gamed through the 8-bit and 16-bit eras, I was mildly concerned by A Pixel Story‘s assertion that it ‘charts the evolution of video games’. Would this also entail reliving the less desirable aspects of said eras?

Would A Pixel Story force you to deal with password-based save systems or finite lives? Would there be levels that were physically impossible to complete? Suddenly, the bad old days of retro gaming came flooding back to me. I needn’t have worried, however. The game’s primary concession to bygone days is the way the graphics improve as the game progresses, each mirroring a stage of gaming evolution. In fact, all said, A Pixel Story ranks as one of the most rewarding games I’ve played in ages.

At first glance, A Pixel Story appears to be aping Super Mario World and its ilk. As the game begins, your anonymous character is dropped into a two-dimensional world. Even this early in the game, the brightly coloured, albeit pixelated, landscape is a joy to behold. As you bound along the level, you expect you’ll soon be hurling fireballs or sadistically stomping on hapless turtles, yet despite its retro veneer, A Pixel Story has more in common with Portal than with old-school platformers. There are no foes to fight – though you do have to contend with a seagull who steals your magic hat. After peacefully recovering it from the bird, it becomes the primary means by which you traverse the levels.

Additional mechanics are introduced later in the game, which prevent it from becoming stale. But the hat’s magical functionality always remains central to proceedings. The hat, in essence, operates as a short range teleporter. When you teleport, you retain your momentum, again in the manner of Portal. Your hat will also obligingly hover in mid-air unless you recall it. 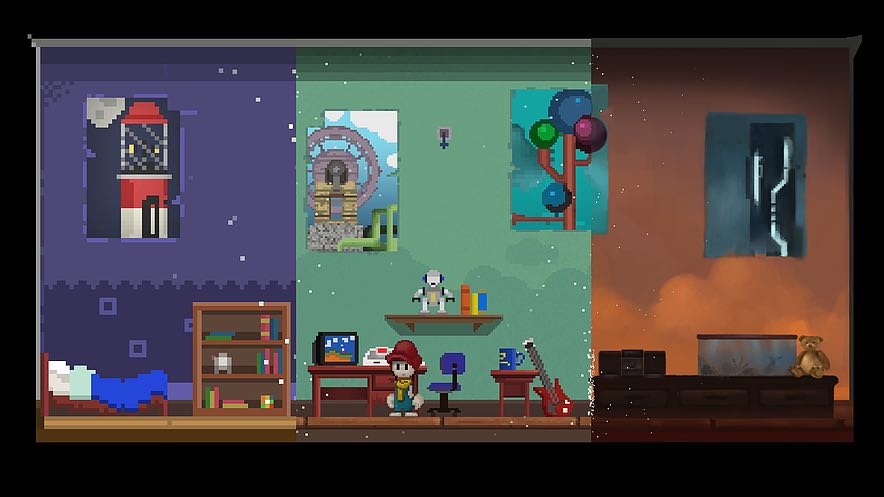 Should a platform prove too far away to reach by normal means, you can leap and, falling short, drop your hat. Providing you didn’t plunge onto a set of spikes or similar, you can then scramble back up. Whereupon you take a second jump and teleport, your momentum transporting you across the chasm.

Simple as this sounds, A Pixel Story‘s puzzles grow progressively more convoluted as you proceed through the levels. Later areas introduce platforms that transport your hat, bouncy walls and even robots who can be programmed to act as your proxy. The latter aspect comes into play when you encounter levels where two switches must be flipped at once in order to proceed. Timing does play a part, though you don’t need have lightning-fast reflexes to conquer these conundrums.

Death also becomes more commonplace as you progress. However, death is rarely problematic thanks to the frequent mini save points. The real beauty of A Pixel Story is that death is a learning experience. With each demise, you begin to figure out what works and what doesn’t. And when you finally crack a puzzle, it’s an immensely satisfying feeling.

On top of that, you get an additional rush when you reach the end of an area and witness the graphics being ‘upgraded’. By the time you reach A Pixel Story‘s fourth and final area, you’re ready to take on the world.  Unfortunately, that’s where the game hits a speed bump. 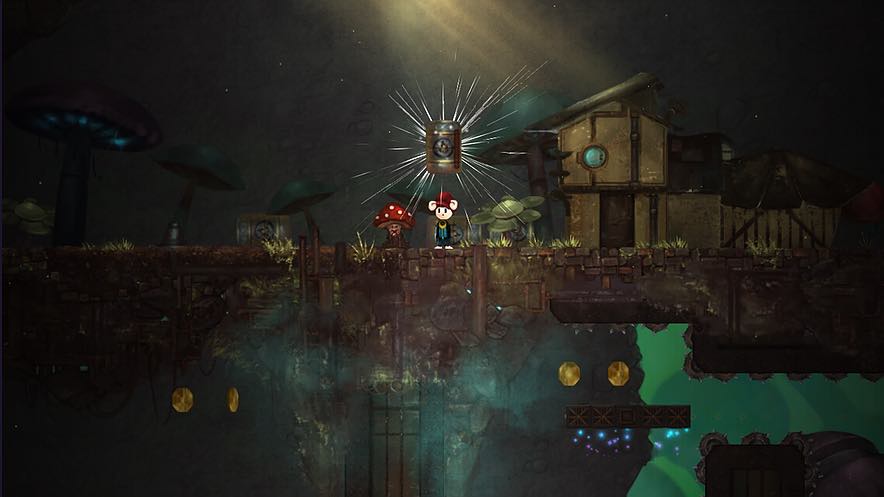 Your character is prophesied to free the game’s virtual world from the tyranny of ‘The Operator’. Except that there’s absolutely no tyranny or oppression in evidence. While it attempts to be appealing and quirky, A Pixel Story’s plot is threadbare and unengaging.  The characters you encounter seem utterly indifferent as to whether you do or don’t succeed. Nevertheless, reaching the game’s fourth area initiates a visually impressive boss battle. But as it transpires, the entire battle is nothing but a series of quick time events.

This bizarre design decision makes A Pixel Story’s final level the equivalent of finishing a gourmet meal by chewing on a cactus. The bulk of the game is a hugely satisfying affair, leaving you grinning like an idiot when you finally crack a puzzle. Reducing the final confrontation to a button-mashing battle is a huge misstep.

The hands-off end-sequence aside however, A Pixel Story is a hugely fulfilling experience. Its perfectly pitched difficulty ensures that it’s challenging but never frustratingly so, and above all, it has that elusive ‘just one more go’ quality that will keep you hooked. If you prefer brain-scratching to button-mashing, then you’ll love A Pixel Story – or I’ll eat my hat.

A Pixel Story is available on PC, Xbox One and PS4. We reviewed the Xbox One version.