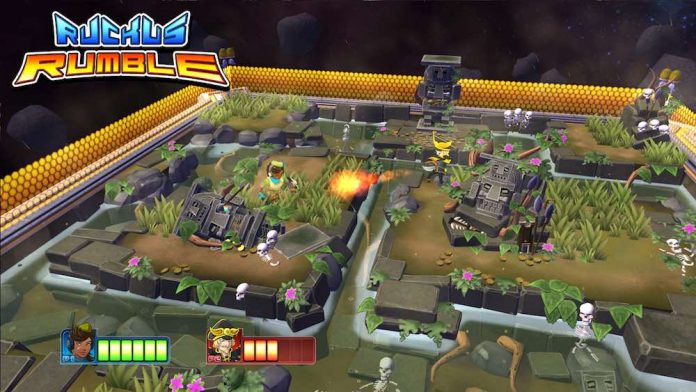 With a little help from PlayStation First and Sony’s own academic programme, comes a couch PvP brawler created by a group of students.

Originating from Fulun in Sweden, a group of plucky first year students at game development school, led by Linus Larsson, decided to make a game that was pragmatic, lighthearted, and could be prototyped quickly in order to spend as long as possible polishing it. With this in mind, the idea for a simple yet fun local multiplayer game was born, and later on became Ruckus Rumble.

The team’s idea was supported by Sony Interactive Entertainment’s academic programme Playstation First, which looks to help publish games from selected university students. This gave the team a great starting point, and meant their game would be available on the Playstation Network. It’s not the first game to make it onto PSN made by students – PieceFall, a Tetris-like puzzle game made by a team at Sheffield Hallam University took that crown back in 2015 – but thanks to Sony’s commitment to PlayStation First, it hopefully won’t be the last, either.

At its core, Ruckus Rumble is an arcade-style melee brawler for 2-4 local players. Unfortunately, there is no practice mode for anyone wanting to play alone, or even an option to play with friends or strangers online: it is simply a local game only. This obviously limits the playability of the game a great deal, and caused me a mild amount of annoyance as I assumed I would at least be able to test it out a little on my own before roping in anyone else to try multiplayer; alas.

However, what most shocked me about the game was not so much its lack of single player options, but rather its complete lack of any kind of narrative whatsoever. Ruckus Rumble offers nothing in the way of background, character information, or a story of any sort. It is a shame, too, as once on the character selection screen, each individual is highly unique, stylised, and interesting. There is a lady mercenary named Raja, a Navajo enthusiast called Dave, and a Starfleet pilot called Cpt. Caroline. Each character has a specific look and colour scheme, and each can be further customised by the player. I was instantly intrigued, as I looked forward to finding out more about this array of quirky characters, but to no avail. Players are thrown straight into a match without any background information, or even an explanation of why these people would be fighting each other. Maybe I’m alone in this, but a bit of exposition to give some kind of character motivation, even in a simple brawler, can go a long way. 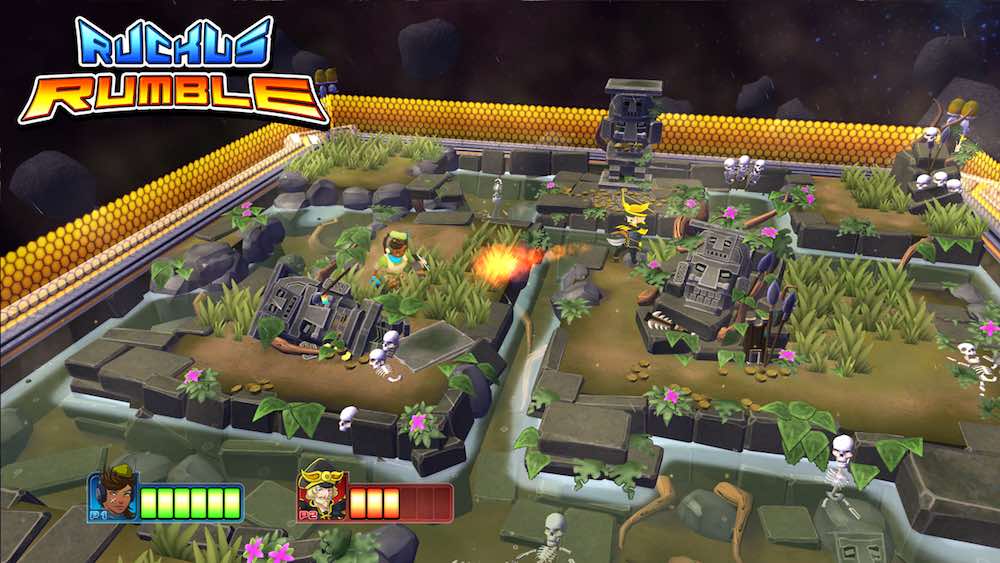 As a PvP battle game, your aim in Ruckus Rumble is, naturally, to defeat your opponents. Though the game promotes the use of combo moves for effective dispatch, it gets incredibly boring very fast when your options only ever consist of hook shots, fireballs, your sword, or slamming on the floor to stun someone. What’s worse, despite the initial interesting variation in costumes and design, each characters’ moveset and abilities are all exactly the same. To start with, it’s fun getting to grips with each ability and how they work, but it soon gets very repetitive.

When I first loaded up the game, the crazy battle music, the vibrant, psychedelic colours, and interesting aesthetics drew me in with pure excitement. I couldn’t wait to get stuck in. But after the first hour me and my roped-in player two were already bored. It is essentially the same thing over and over on a different, very small map. Ruckus Rumble is definitely not the kind of game with any lasting longevity.

The problem is there is nothing actually wrong with it; in fact, it has almost all of the key ingredients to make an indie gem if only there was a bit more work put into it. But that’s the whole point; there needed to be more; so much more! While some narrative flavour – such as a bit of backstory for each character – would have given the game some much-needed depth, even a single-player campaign against AI would have gone a long way into giving Ruckus Rumble some variation.

That said, considering that Ruckus Rumble is actually a first-year university project and not some AAA development, I can’t fault it too much. In addition, it was created within nine weeks; an astonishingly fast turnaround for any full game to be completed. For what it tries to achieve – a simple brawler for quick and easy party play – it actually does a pretty good job. Though I still believe there is plenty of room for improvement, and it’s not the kind of game you’re going to want to sink hours of time into, I have to admit that I’m impressed by the hard work of the developers, artists, designers, and programmers that created all of this as students.

Ruckus Rumble is available on PlayStation 4.