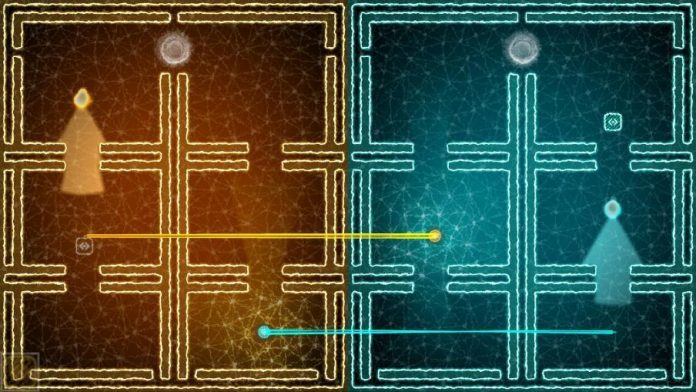 A contemplative and serene puzzle game, Semispheres combines challenging head-scratchers and simple stealth gameplay to create a wonderful experience that draws inspiration from the best of its genre.

The Semispheres website proudly displays a host of awards the game has received during its development and it’s easy to see why. Its unique mechanics, look and style make it stand out from the crowd. It is quite unlike anything I’ve ever played before.

At the core of the Semispheres experience is its unique split screen, single-player gameplay. The player must control two objects at the same time, guiding each one separately to the exit on each map. Every map is made of two halves, identical in layout except for item placement and ‘guard’ positioning. Items allow the player to manipulate each half of the map in clever and inventive ways. The game also features mild stealth elements as players must use items such as noise-makers and portals to circumvent guards that block their path.

The game centres heavily on the idea of interconnected yet separate realities. Its much easier to understand once you’ve actually seen the game in motion – the below trailer does a pretty good job of presenting the basics. Essentially, each of the player’s two characters are controlled individually using each analogue sticks on their own halves of the screen. Actions you take on one half may have an effect on the other, e.g. teleporting a guard from one side to the other. This idea of dual, connected realities is vital to the game; the notion of which is furthered by the game’s art style.

The striking orange and blue colour palette is very reminiscent of Portal. One of the in-game pick-ups is in fact a portal, allowing the player to jump from one side of the screen to the other. The background for each level is effectively copied and pasted from one to the next – a sort of spider’s web of connected points, again reinforcing the idea that everything is linked. A little more variety in the backdrop would have been appreciated, however it doesn’t detract from the enjoyment of the game. It just starts to feel a bit samey by the later levels.

Semishpheres also takes inspiration from another great puzzle game, The Witness. Although they couldn’t be more different in terms of puzzle mechanics, both games invoke a sense of calm and tranquility. Semispheres also borrows some of The Witness‘ design philosophies in the fact that every inch of every map feels handcrafted and never left to chance. Each item and guard is meticulously placed, making the solution to each puzzle more about planning, than execution.

The game is well paced, meaning that new mechanics are introduced at a rate suitable for the game’s moderate learning curve. Veteran puzzle gamers shouldn’t have much trouble with game’s first few opening worlds, though later levels up the difficulty level significantly once multiple mechanics come into play. I never felt as if I was facing an impossible task, but trial and error began to be the most effective method of finding my way through some levels.

Narrative is delivered through comic strips, which are rewarded to the player on completion of each of the game’s worlds. The story about a boy and his robot, though heart-warming, feels shoe-horned in as it seems a little out of place with the rest of the game’s mechanics. 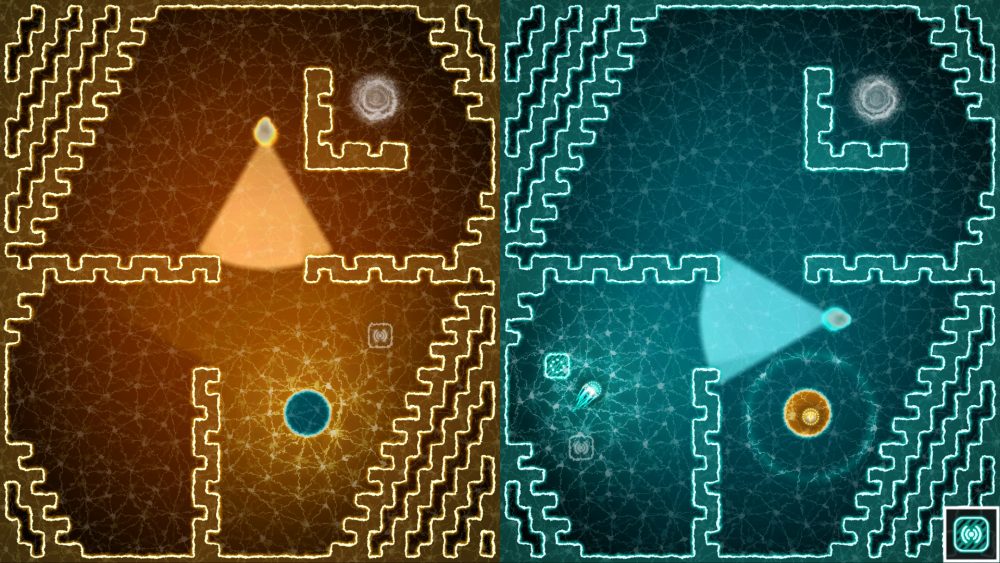 The soundtrack composed by Sid Barnhoorn, whose other credits include the Stanley Parable and Antichamber, is a beautiful mixture of relaxing soundscapes and spacey echoes. Although not particularly memorable as it features very little in terms of recognisable melody, it bolsters the experience by providing a neutral backing for the rest of the game.

Semispheres is an easy game to recommend for fans of the puzzle genre. Challenging but fair sums it up nicely, with plenty of variety in mechanics and level design. The dual reality premise makes Semispheres distinctly unique in its gameplay and is a clever mechanic that other puzzle game developers would do well to take note of.  It’s a relatively short game at around three to five hours depending on skill level. Nonetheless, it is still worthy of being mentioned within the top tier of its genre.

Semispheres is available on PC and PS4. We reviewed the PS4 version.