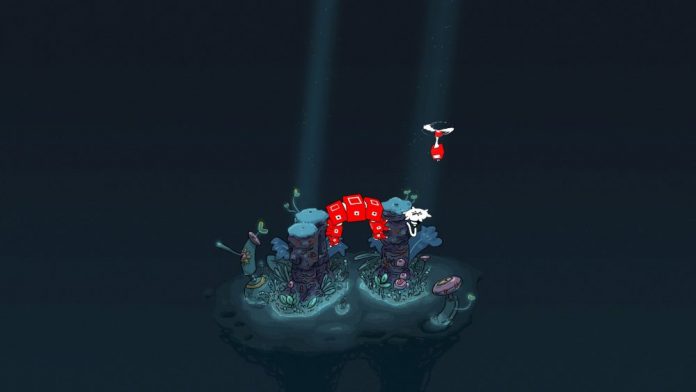 Just before the dawn of the 2010s, indie games underwent a revolution. Braid, and others from the Xbox Live Arcade lineup caused a ripple effect that changed the landscape.

Indies provided a fresh break from the stagnating AAA field, and paired abstract stories with meaningful gameplay. Titles like Undertale and Papers, Please have carried on this tradition, and I’m glad to say She Remembered Caterpillars wears this mantle proudly.

She Remembered Caterpillars begins with a verse and chapter from a fictional mythology. As the first levels open up, you seem to control the primordial growth of life itself. To start, you guide your little “gammies” over caterpillar bridges of primary colours to flowerbeds, where they plant themselves and fly off to the next puzzle. As you climb the stem of this bizarre tower, the puzzles grow in complexity while the snippets of story drift between concrete and abstract fragments of memory. It feels as though you’re scaling a brain stem and repairing its damage.

Mechanically, She Remembered Caterpillars is a simple two-button point-and-click puzzler. The left mouse button selects a gammy and moves it, while the right button combines or separates any two. The basic obstacles are bridges you can only pass over if you match their colour, or if one of your fused gammies’ colours matches it. On the obverse, coloured arches prevent the passage of same-coloured gammies, or any fusions that contain that colour. Later acts add new factors, like pressure switches, one-way bridges, and colour drainers, but the core concept is about navigating complex semi-Eulerian paths.

While it may sound simple, the puzzle design is genius and solving them requires some mental gymnastics. The first 20 chapters go by relatively quickly, but the second half of the game comprises a gauntlet of brainteasers. What at first you take for granted – red gammy can cross red bridge, but not red arch – evolves into tactical second guessing: orange gammy can cross yellow bridge, but not purple arch. She Remembered Caterpillars often encourages you to think a dozen or more steps ahead. Paper and pencil may help, as well as a thesis-level familiarity with graph theory, but brute-forcing solutions tends to work well too. Eventually. 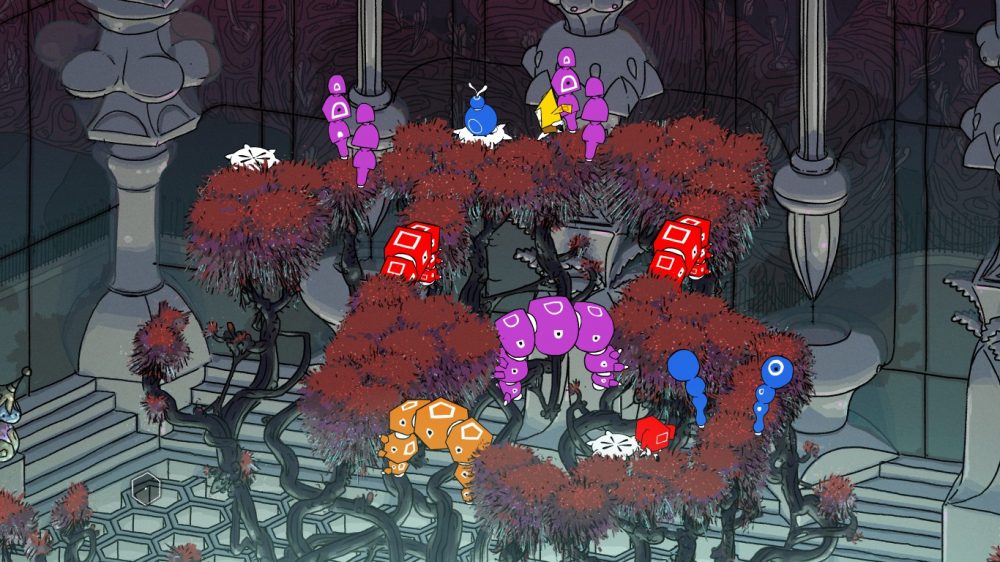 She Remembered Caterpillars is above all, though, a visual treat. Gammies are not only colour-coded, but identifiable by shape for the accessibility of colour-blind players, but gosh does the palette astound. The crisp homogeneity of the primary and secondary colours strikes a contrast with the painted textures of the levels while the grandiose backgrounds impose from a distance. Exaggeration is common among reviewers, but I’m being sincere when I say this is one of the most beautiful games I’ve ever played.

The sound design is a masterstroke in its own right, though more understated. The ambient backing tracks lend a strong sense of place, and all the sound effects from walking, hitting an obstacle, fusing and splitting are bouncy, crunchy, and gooey in equal parts. The story, intentionally vague, plays off the natural preciousness of these aesthetics.

I did hit a few snags in my playthrough, however. I wasn’t overly fond of the implementation of colour drainers that suck the colour from a gammy and paste it onto colourless gammies. While a good numbers of levels using that mechanic are solid, a comparable number feel like they’re just asking too much of the player. It’s hard enough to figure out fusions and separations with the default colours they give you; when you become responsible for eliminating some colours and creating new ones, the sheer amount of possibilities can become overwhelming. A few times I had to hold my head in my hands until the anxiety passed.

And while the final level serves a gorgeous thematic purpose for the narrative, it’s very “busy.” She Remembered Caterpillars succeeds best in its simplicity; its 4th-grade art class paint mixer guise. Levels are small, boxy, and clean until you get to the final level, which looks more or less like a hodgepodge of clashing hues and ideas. Don’t get me wrong; it’s still incredibly pretty to look at, but at a first glance I couldn’t even tell which surfaces I could walk on and what was decoration. Besides these minor complaints, I have nothing else negative to say. 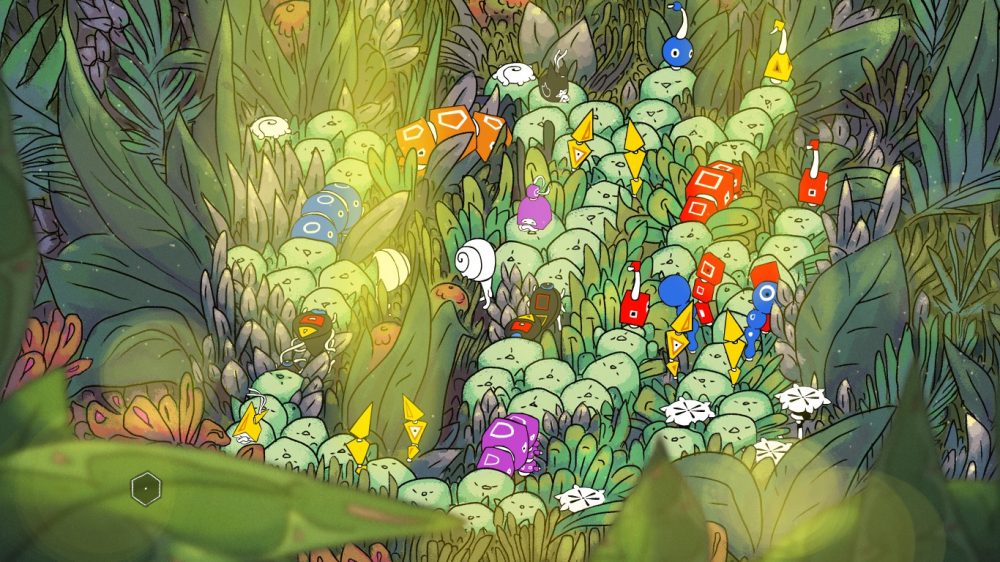 I’ve followed the development of She Remembered Caterpillars for a while. Although I certainly thought it would be good, I did not expect that I would be as blown away as I was. This is a game of impeccable design and gorgeous art, with almost no missteps to speak of. With all the games to choose from these days, don’t let this one slip by.

She Remembered Caterpillars is available on PC.