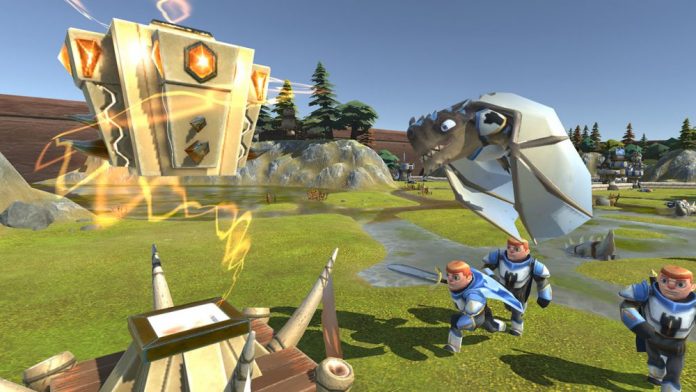 It conjures up epic images of grandiose battles between, well, commanders laying siege to each other’s crafts. In reality however, it’s a somewhat charming, somewhat underwhelming, real-time strategy title which feels more like a short demo of a game than it does a standalone £14.99/$19.99 title.

Don’t get me wrong, there’s plenty of potential for the game to be great; it just often falls short at the crucial moment. The basic premise is this: space-faring, medieval knights crash land their spaceship on alien planet. Our “heroes” then, a bit like the Trump empire, embark on a rapid expansion programme by destroying any other building or life form they find. I can’t remember why. I think one of them went mad or something, it wasn’t that interesting and I got confused when we went from crashed vessel to invading force, but I digress.

You begin each round with a “Keep”, a kind of fortified central control tower of old and from this you can literally slingshot new buildings. You extend your reach across each map by throwing Outposts which in turn let you fire more buildings from them. Each building is connected to its parent structure by an impenetrable wall, so tactical placement of buildings becomes paramount when the enemy begins their attack. These walls also prevent you from building on or over them, so it’s important to make sure you leave enough room for expansion. Should the enemy’s inevitable onslaught of shambling swordsmen sever your branching network of buildings, then you also lose any other buildings that are further along that branch.

Building types start off basic and, well, they remain basic. This was actually my biggest disappointment with Siegecraft Commander. I kept expecting the development trees to open up into sprawling menus with a slew of possibilities and variations available. Instead I was left with only a handful of building or unit types to last for the whole game. This is most notable when, about halfway through the story, you begin playing as a different faction (for some reason) and you’ll find it’s only the aesthetics and names of some of the buildings that change (for instance from Armoury becomes the ‘War Factory’) but the functions remain the same. 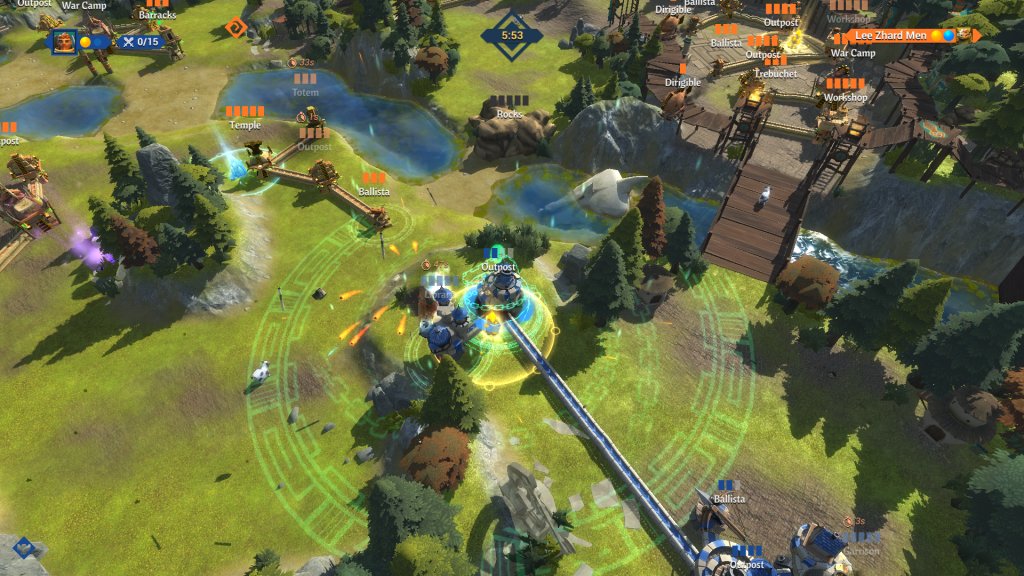 The buildings you are offered, though, are perfectly functional; for example the Garrison will open up the possibility of building a Barracks, which steadily produces knights who will amble off and attack the nearest enemy unit or structure. Or a Library will then allow you to extend from it a variety of spell-casting towers. One of my personal favourite tactics was to create a good air and ground defence using Ballistas (air) and Mortars (ground), so I could withstand the enemy incursions whilst steadily creating a Dragon army to unleash fiery hell upon my foes. This is made easier by the lack of a resource management system, which means you can fire out as many new buildings and units as you wish, with space and time your only constraints.

Beyond that, the best overall tactic is to use the Outposts to catapult not buildings, but TNT barrels towards your enemies and their bases. Infantry will perish on impact with a TNT barrel, with most structures taking no more than two or three good hits. The aim of the game is to destroy the Enemy Keep – though their Keep, as with yours, can survive significantly more hits, giving the defender a chance to retaliate. This means that most rounds can be won by rapid expansion and quick reflexes, which will eventually make short work of even the most fortified of positions.

As good as this all sounds, Siegecraft Commander does hold various nagging issues which are hard to ignore. The most disappointing one, the lack of diversity of buildings or structures, I’ve already explained, but not far behind that is the duration of the single player campaign. Each of the two factions you play as has its own story, spanning only eight levels apiece. These can sometimes last for maybe 25 minutes, but that’s only because you start each level with a blank slate, so building a new network from scratch takes up most of that time before you are ready to go on the offensive. A few small but noticeable glitches also cropped up, with some defeated characters suddenly appearing as massive objects in the middle of the screen. They only stayed in this state for a brief moment but it was fairly jarring, especially considering you’re concentrating on much smaller things, mostly. There were also occasional camera issues but again, nothing game-breaking.

One plus of Siegecraft Commander is the relatively charming aesthetic. Okay, so it’s hardly LittleBigPlanet, Unravel or Yoshi’s Wooly World but the overall cutesy, cartoony effect is well-implemented – although things can become a little confusing where there’s a lot going on, especially if you’re trying to throw a TNT barrel at an enemy who is obscured by buildings, as one wrong move could see you destroy at least a part of your base by mistake. This isn’t helped by the fact that your slingshot arrow that you use to place buildings or aim barrels is both green and translucent, blending in with the surrounding, so it’s almost impossible to accurately aim until you’ve spent a bit of time with it and got a feel for your shot power. While frustrating to begin with, this actually works better later on, as you’ll find you’re able to take aim and fire on-the-fly with some fairly dexterous flicks of the thumb-sticks, though it may have been better to at least have the option of a small red dot at the end of your arrow so it stood out a little more against the background. The lack of a tutorial also meant it took a little longer than it should have to get to grips with everything. 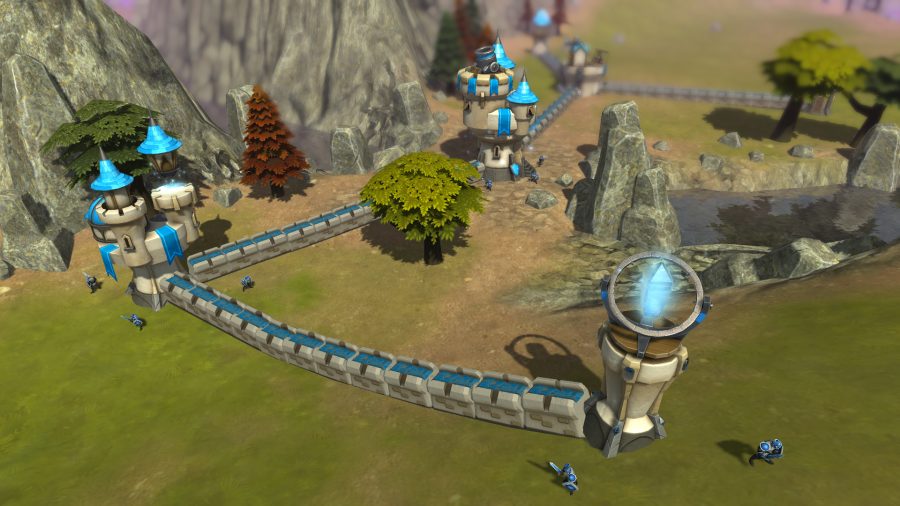 Siegecraft Commander‘s narrative is told to us through what looks like a bedtime-story book framing device, which is used to both introduce and then summarise each level. Each of the two or three characters on each side generally has something to say about what’s been going on, so we see them appear on the page and then listen to some over-the-top and unintentionally hammy voice acting, as we find out the details. Annoyingly, should you fail a level, this will be repeated every time you restart, so while it may start off harmless enough, the cheesiness becomes a little unbearable as things wear on and made me lose interest around the half-way mark.

Siegecraft Commandar also has online multiplayer options, although during the time I spent reviewing the game, I only ever found a single online opponent. I tried all of the various matchmaking options, including cross-platform play so I could join PC gamers too, but to no avail. This could have been a technical error, but it feels like without a sudden surge of online players or the ability to play against friends (which seemed to be a glaring omission) the multiplayer may be a non-starter. If it does work out, however, online matches can be played in real-time like traditional RTS titles, or can be turn-based in either small, 15 second increments, or with no time limit, giving the game a more strategic, less rushed feel (if you manage to find an opponent).

In all, Siegecraft Commander is not a bad game, but while it can be fairly simple and pretty fun at times, it definitely has its flaws. Limited options for both construction and unit creation leave it feeling just a little lacklustre, and the short story, which ended rather abruptly, means it feels frustratingly like it’s held back from being something much better and something that I would’ve quite enjoyed. It’s also worth noting that, while PSVR support has been confirmed, Sony’s headset is not currently supported –although I don’t see how VR could add too much to the experience, anyway.

If you’re a die-hard RTS fan, Seigecraft Commander and its brand of cheerful, bright and breezy gameplay is enjoyable enough. But without a significantly larger online community, Siegecraft Commander just doesn’t last long enough or offer enough of a challenge to say it stands out, particularly, among today’s relatively constant stream of indie titles.

Siegecraft Commander is available on PC, Xbox One and PS4. We reviewed the PS4 version.