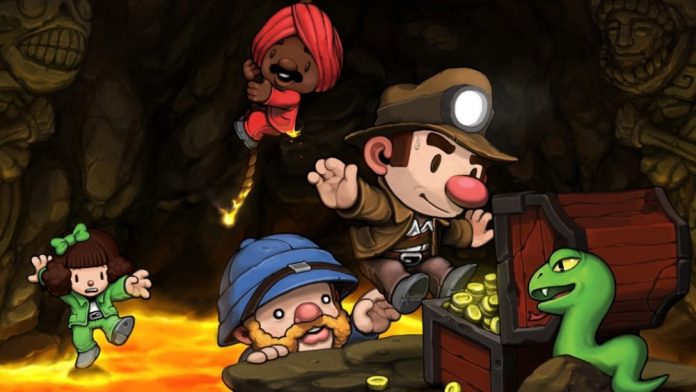 Derek Yu, the developer behind Spelunky, created a masterpiece in gameplay and game design by unashamedly borrowing from the best bits of the platforming and roguelike genres. The result is a hard-as-nails, tense experience that perfectly balances risk with reward like few others.

Yu describes Spelunky as “a platform game, like Super Mario Bros., but with randomly generated levels.” This summation although somewhat reductive, is accurate enough to give casual players a decent idea of what they’re getting in to. At first glance, it looks like any other platformer. Though dive a little deeper, and you’ll discover a vast treasure trove of player discovery, creativity and challenge.

“Spelunky is a great game due to the design philosophies that underpin its every pixel.”

Spelunky is played from a 2D side-on perspective. The player must navigate each level, progressing from the entrance at the top, to the exit at the bottom of the level. It consists of four main worlds, each world consisting of four levels. The player can jump on enemies or attack them with their whip to defeat them. Ropes and bombs are used primarily for creating new pathways through levels thanks to destructible terrain though smarter players will find other uses for them also.

Spelunky assumes some prior knowledge on the part of the player when it comes to established conventions of the platforming genre; essentially run and jump your way through one level to reach the next. In Super Mario Bros. and most other platformers, levels are completely authored and do not change. This means the player can rely on their knowledge of enemy spawn points and item box locations etc. to traverse each level, safe in the knowledge that items and enemies will be in exactly the same place on their next playthrough. Spelunky removes this comfort by randomly generating its levels through a clever set of algorithms. Using a mixture of authored and randomly generated content, the player is kept on their toes, keeping their sense of adventure alive and genuine. The video below explains the processes behind Spelunky‘s ingenious level generation.

Although the way Spelunky creates its levels is pretty clever, it isn’t perfect. But the beautiful thing is, it doesn’t have to be. By including destructible terrain, items that are walled off during the level generation process can be accessed by using a bomb to create new pathways. This creates lots of opportunities for player agency and heightens the enjoyment of the game.

I first played Spelunky when it was released on Xbox Live back in 2012 and still play it regularly. It took around two weeks of fairly consistent play until finally I exclaimed “I’ve fucking done it!” – I’d completed level 4; I was finally triumphant over what had originally seemed like an impossible task! However, to my dismay a new level loaded, this time with a jungle theme. The “Mines” world I’d grown so accustomed to was no more. I was now faced with new enemies, less forgiving level layout and an even greater sense of self-determination to see the game through. Within 10 seconds of exploring the jungle I was dead. Five years later, and I’m still trying to defeat Olmec – the game’s “final” boss. I’ve resigned myself to the fact that I’ll probably never beat the game, though certainly not through lack of trying. I’m just not good enough, and I’m fine with that. Totally fine.

Let’s address the game’s challenge aspect. Spelunky is hard. Really, really hard. A good friend of mine, a veteran of the Souls series of games, likened it to the Souls franchise in terms of difficulty level – and he’s not wrong. The random nature of the levels keep players guessing as to what’s coming next. Also, the game features permadeath (a prominent feature of the roguelike genre), meaning that when you die, that’s it. Game over. All your items are gone and back you go to World 1-1 with a completely new set of randomly generated levels. My current death tally sits at a hefty 2,445. However, not a single one of these deaths felt like I’d been cheated by the game. Each one was down to a mistake I’d made, which could then be learned from and applied to future runs.

Enemies in the game have a pretty limited behaviour set, making it easy to anticipate their moves and attacks. The real challenge comes the way these monsters interact with each other, which can have unintended consequences. For example, the poisonous spit from a cobra maybe accidentally hit an explosive crate causing a huge explosion, a falling rock may trigger a spike trap. The game also places a time limit on the player in each level. After a certain amount of time, an invincible ghost will spawn, that slowly follows the player around the level. One touch from the ghost means instant death. 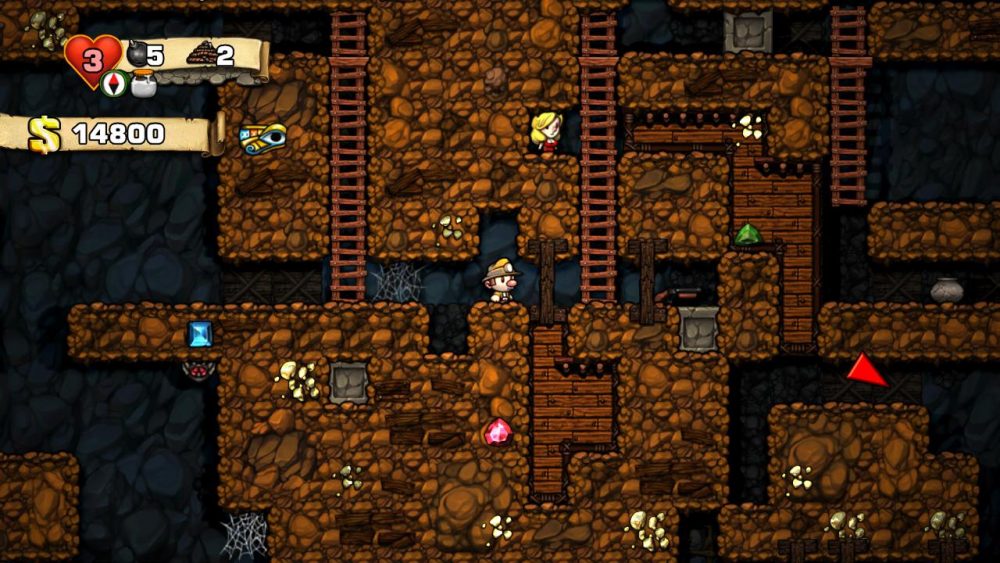 In my opinion, the most interesting and unique quality in Spelunky is its ability to create an internal dialogue within the player. Considering that death comes relatively easily and with dire consequences, the player is constantly made to evaluate their actions. Seeking out gems and gold, which can be spent on items and weapons to aid the player is the main driving force behind player exploration. This constant risk/reward balancing act of avoiding danger whilst collecting loot is at the heart of what makes Spelunky a tense, yet ultimately gratifying experience.Though it is possible to complete the game without these items, this isn’t recommended as it’s insanely difficult to do so. Imagine trying to run complete a run of Dark Souls with only your starting equipment and you’ll get the idea. It has been done but only by a very exclusive group of the hardest of the hardcore.

Spelunky‘s infamous shopkeeper is the ultimate embodiment of this risk-versus-reward structure. Helpful items including bombs, ropes, guns and teleporters are all for sale in the shop. Items can be bought for a price. Or, they can be stolen. Just don’t expect the shopkeeper to be too happy about it. If you try to leave his shop without paying, he’ll fly into a shotgun toting rage, bouncing around erratically, almost guaranteeing death for the player.  You could try and injure him, giving you a very brief amount of time to grab his shotgun and turn it on him. But this is also pretty hard to achieve. If you do anger the shopkeeper for whatever reason, all shopkeepers throughout that game will instantly attempt to shoot the player on sight. It also spawns a shopkeeper at the exit of every level. If you manage to pull off a heist however, the rewards can be immense and aid the player greatly, though the rest of this already difficult game will become a lot more difficult.

“The constant risk/reward balancing act of avoiding danger whilst collecting loot is at the heart of what makes Spelunky a tense, yet ultimately gratifying experience.”

This idea of metagaming challenges (extra rules imposed on play by players, rather than the game itself) is something that Spelunky basks in. The speedrunning community has been especially receptive to Spelunky with the world record sitting at just under 100 seconds. Watching the run is the closest I’ve ever come to believing in magic. Mosstier.com tracks all similar Spelunky metagame achievements with links to videos and is a great way to see how the pros play. Make sure to check out the solo eggplant run video by Bananasaurus Rex (kudos for the great name). I’ve gotten pretty good at the game. But this run truly is an incredible feat. So much so that Polygon named it their most fascinating gaming moment of 2013.

An average playthrough from start to end takes around 30-45 mins. The fact is that very few players will ever actually ever finish the game. Many will even struggle to make it out of the Mines. But with each new run comes new knowledge. Perhaps you didn’t know that by passing underneath a spider enemy type, the spider will fall to the ground, probably on the player’s head, inflicting damage. Next time, you won’t make the same mistake and with each run, you get better at the game, constantly learning its rules.

Spelunky is a great game due to the design philosophies that underpin its every pixel. Its unique take on the platforming genre by including several elements of roguelike games keep it fresh every single time you play. The world seems more lived in, more than some open-world AAA games I’ve played. The rapid gameplay loop from death to beginning the game again takes literally two seconds before the player is back in the action. All these combined make Spelunky a game that showed me how mechanically rich, addictive and yet easy to understand a game can be.

For anyone interested in learning more about Spelunky, I highly recommend reading Spelunky by Derek Yu. Not only is a it fantastic insight into the world of indie game development, but a great primer for anyone wishing to enter the game development world themselves.