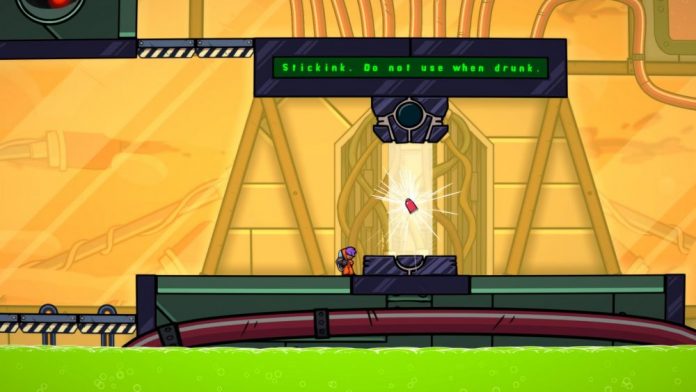 When someone mentions a particular genre, there are normally a few amazing games that come to mind. With platformers, we normally think of Super Meat Boy, LIMBO, Rayman Legends, or Braid. It’s incredibly hard to break into this top tier list, especially with the huge influx of games lately, but Splasher is making one hell of an argument for being added into the big league.

Splasher follows the story of a “splasher”, a custodian of sorts, who works for Inkorp, a paint-making factory. During one of his shifts he stumbles across Docteur, the factory’s evil boss, performing some experiments on other splashers. After a narrow escape, our hero sets out to take down Docteur and free his fellow splashers from grim fates.

The base gameplay of Splasher is pretty simple: run, jump, and spray. For the first few levels it’s just that simple; you’re equipped with a water cannon as your only weapon. After a few levels, you unlock a second spray canister, filled with red ink, which can be sprayed on walls and roofs and it allows you to stick to surfaces you’d normally slide down. A few levels later, the yellow spray canister is added to your arsenal, and now you can bounce. At this point the combos start getting pretty serious and the platforming kicks into high gear.

In order to beat a level, you just need to reach the finish line. There are no lives, so you’re free to retry as many times as you need to. The real challenge comes with rescuing the seven stranded or caged splashers in each level. The first six splashers are hidden in hard-to-reach locations off the beaten path, and have to be recollected if you die before reaching a checkpoint. Sometimes they are hidden in quarantine zones – little mini-levels where you need to kill a horde of enemies in order to free the splasher from their cage.

The seventh and final splasher is located at the end of every level. In order to unlock this final splasher, you need to have collected 700 or more “golden ink” throughout the level. Golden ink can be washed off certain walls, collected from fallen enemies or awarded for freeing other splashers. The beauty of this mechanic is that there is slightly more than 700 golden ink in the level, so if you miss cleaning some walls or killing an enemy or two, you can still unlock the final splasher from his cage.

View our gameplay footage of level one of Splasher below:

There are 22 levels in Splasher, spread out across the Inkorp lobby that acts as a level select screen. The game does an amazing job of previewing new game mechanics by the doors of each level. For example, level 3 is surrounded by red ink since it focuses on getting the player used to the sticky mechanic. Level 12 has a timed laser in front of the door before the player ever encounters it in a real level. Unfortunately, the level select is also the only real part of the game that I didn’t like. It’s a large area to explore, and can take some time to get to the level you want to play. It’s not too much of a problem since the movement in the game is incredibly well done, but it can still be a bit tedious when you just want to jump into the next level. It can also prove to be difficult to return to a specific level later on as you can only see a very limited number of the levels at a time.

There’s a great variety of levels in Splasher. Several levels are set pieces with mechanics that are only used a handful of times: there are a couple of windy levels to demonstrate how to use your sticky ink in a whole new way; speed-based levels where you’re racing against rising goo; and laser levels – so many lasers. Most levels feel completely different from each other, even if they maintain relatively similar visuals throughout. It really helps keep things intriguing and kept me hooked for long periods at a time.

Splasher‘s wide level variety is matched by its brilliant soundtrack (which is available for separate purchase on Steam, by the way). The music fits the individual levels really well, and never gets old. Paired with great music are really satisfying sound effects: a fun round of applause from the other splashers when you kill an enemy; a beep, beep, BOOM! from a timed laser; the accelerating whirr of a golden wheel as you milk it of that sweet golden ink. They all give such great feedback to each of your actions carried out on-screen.

The developers chose a crazy cartoon art style for Splasher, which seems appropriate given that the game is based around using ink. The visuals aren’t highly stylised and don’t offer a tonne of intricacies – but regardless, it all just fits together so perfectly. The theme reminds me of games like ‘Splosion Man or Jetpack Joyride where a high-energy character is chasing around evil scientists in funny and destructive ways. If you take a minute to sit and admire the environment, you’ll see how much detail has gone into creating the little things that make up the bigger picture; whether it’s a funny poster or a grotesque monster on the loose, there’s a lot going on in the background. 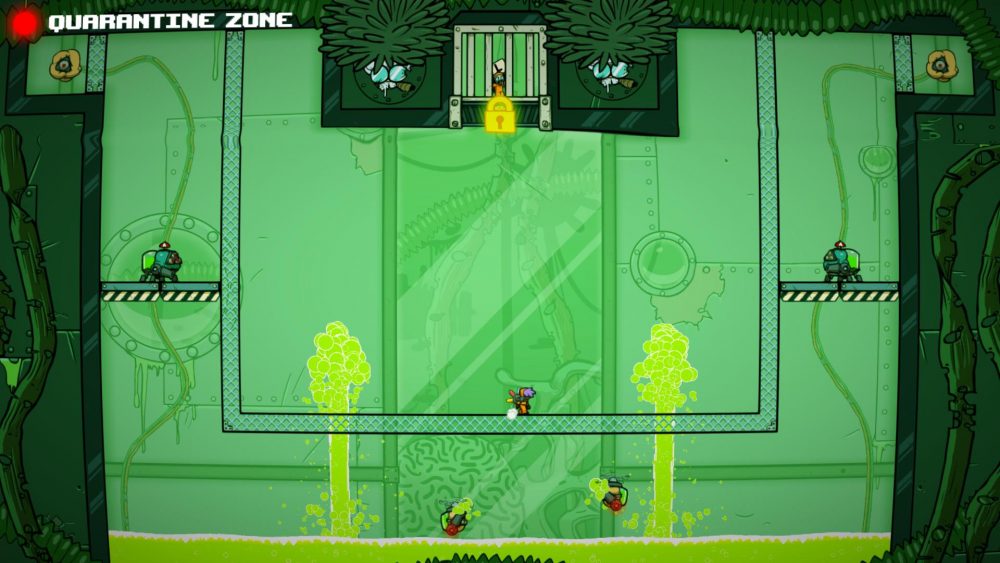 The controls are extra virgin olive oil – that is to say, tight and slick. This is important for any game, but it’s key for a game with a speedrun mode. Splasher’s speedrun mode is so well put together it’s worth giving a shot even if speedrunning isn’t usually your thing. All the collectables are taken out in this mode, so it’s just you against the level with no distractions. Checkpoints will display how far ahead or behind your previous best times you were, making it feel like an Olympic event. You can even take on the entire game in one huge run if you’ve got that sort of time on your hands.

In order for a game to be top tier it needs to check off a lot of boxes. First and foremost, it needs to be fun. Secondly, it needs to have variety to keep the player interested. There needs to be solid visuals, great audio, and tight controls, and it needs to be seamless and free of major glitches. Check, check, check; it’s safe to say that Splasher ticks all the right boxes in all the right places. It has the potential to be the next big thing in platforming – I urge you, if you’re a fan of the genre, then you must give Splasher a try. I just hope the masses enjoy it as much as I did.

Splasher is available on PC.