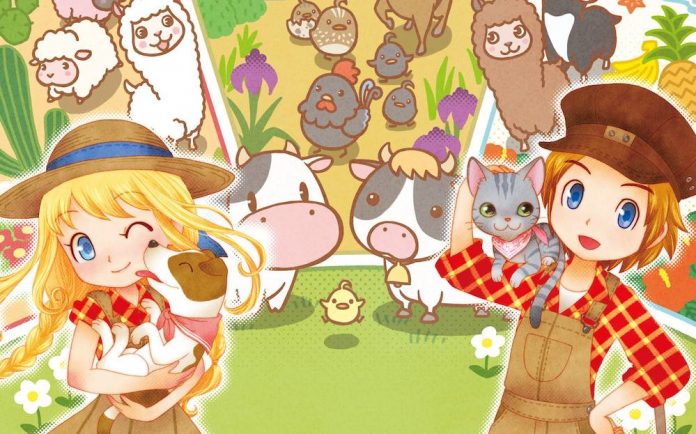 If you really like managing your own farm or if, like me, you’re just crawling out of a 60+ hour Stardew Valley binge and you just need something to fill the gap, perhaps you should give Story of Seasons: Trio of Towns a go; there’s nothing quite like it.

In Story of Seasons: Trio of Towns you play as a young man or woman (your choice) whose family is moving away from their current home for business reasons. Of course you’d like to go with them but you have a feeling deep down that now isn’t the time to follow them: it’s time to get started on your dream of becoming a successful farmer. Your father, being the wonderfully supportive man that he is, tells you that you don’t have what it takes and that you should just put your dream aside. It takes a while but when you finally convince him to give you a chance he calls his brother, your uncle Frank, a renowned farmer, and asks him to help you out.

There’s a little more to the story than that but that’s a little bit of what you have to look forward to when it comes to, in my opinion, one of the longest story set ups and tutorials in the history of gaming. There’s nothing wrong with a great intro of course, but if that great intro is followed by a tutorial that takes 30 minutes or more to complete I’m very likely to fall asleep while reading the explanation of how to feed my cows. I’d much prefer being given free reign of my farm to run around and discover things on my own than have to sit through any more of Uncle Frank’s jokes.

Once you get past all of the tutorials and dialogue with many of the characters, you’ll be dying to get out to your farm and do some planting. Farming is the main attraction in Story of Seasons, but it’s very simple and perhaps just a little anti climactic. In order to plant a crop you have to hoe the land by hitting it a few times with your hoe, then vegetables or fruits are ready for planting. In just one button click your character will throw nine of whatever crop you like into a 3×3 plot of land. After that you have to water them every day for a few days until they’re ready to grow and you can pick them. Taking care of animals is particularly simple as well and just involves making sure they’re fed and taking them outside on sunny days to get some freshly grown grass and some sunlight. 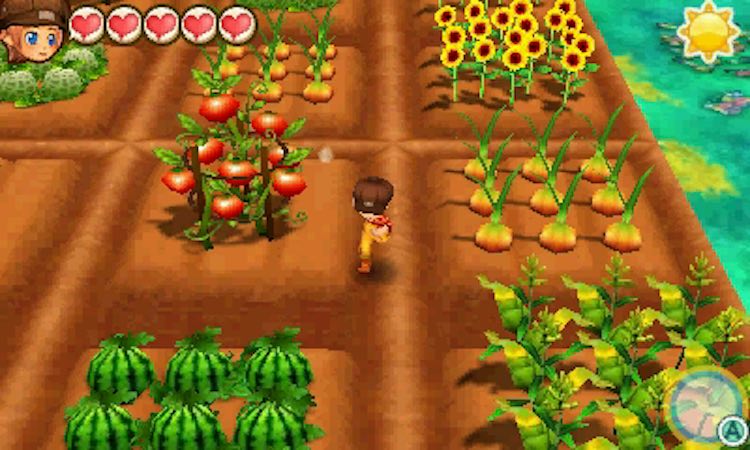 If you think that Story of Seasons is just about farming, you’ll be pleasantly surprised to hear that there’s much more to enjoy in the game. Each day when you go into town there are side quests of a sort that you can do and get paid for by other members of the town. There are delivery quests, where you can pick up packages from townspeople to be sent to other townspeople; there’s shipping quests where someone is requesting a certain amount of items by shipped to them; and finally there are chores or favours where people ask you to help out with something on their own property. There are also town events to enjoy, fishing, and many more surprises that Story of Seasons has up its sleeve to keep its players entertained.

You may be wondering at this point why the game is called Story of Seasons: Trio of Towns. Well, as you progress through the game, two more towns open up that you can explore. West Town is your hometown, where you start out; Lulukoko Town is a very friendly tropical paradise; and finally, Tsuyukusa is a traditional Far Eastern-themed village. In order to stay friendly with all three towns you have to visit all three on a regular basis, doing favours for townspeople and chatting with everyone in order to keep a positive rapport with all.

What Story of Seasons: Trio of Towns does very well is its design and soundtrack. From the first moment you start up the game you’re able to appreciate the adorable characters, the great character dialogue, and of course your ears will love the quirky up-beat soundtrack. Much like my experience with many other farming simulator games, I’d sit down for a quick ten minutes with Story of Seasons and before I knew it, three hours will have gone by. It’s addictive, but the game can get repetitive when you first start out due to a lot of quest grinding and waiting for crops to grow in order to get money. Its biggest problem in my opinion is its lack of a strong goal to work towards. In Stardew Valley there are a lot of quests that take a very long time to complete as well as the overarching community centre project. Story of Seasons‘ big goal is simply to become a great farmer, so there’s not much to keep you going day in and day out.

In the end Story of Seasons: Trio of Towns might not be perfect, but it’s still a wonderful game in many ways. There’s tonnes of stuff to do on your farm, what feels like a million side quests, and even adorable postmen to woo if that’s something you’re interested in *wink*. It’s a shame that it does get quite repetitive, there’s no huge overarching goal, and the tutorial made me want to punch Uncle Frank in the face, but all of the good surely outweighs these minor points. The game design is gorgeous, the dialogue and story are very well written, and overall the game is just really great fun. If you enjoy the farming simulator genre I highly recommend picking up Story of Seasons: Trio of Towns for 3DS and give it a shot.

Story of Seasons: Trio of Towns is available on 3DS.