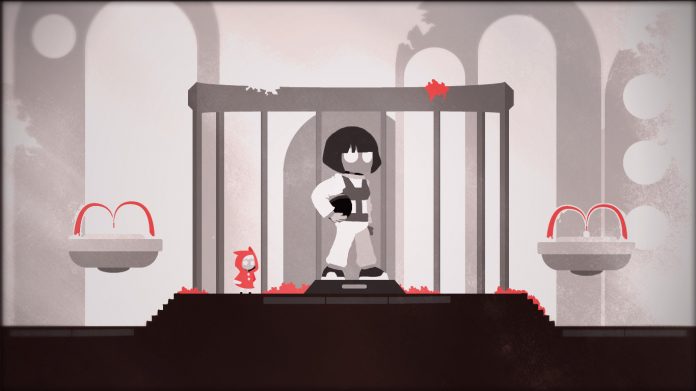 In the same way that noone in The Walking Dead‘s televisual universe had heard of zombies, I suspect that the inhabitants of BOOR‘s fictional world were similarly unexposed to I, Robot, 2001, or any other “Rogue AI” movies.

After all, how else could you explain their that, shortly after touching down on a new planet, these colonists decided to build a colossal electronic brain, the titular BOOR. They’d upped sticks and journeyed into the cosmos to “Build a better and more evolved society”, something that gave me a cynical chuckle.

With a stunning lack of foresight, having never once watched The Terminator, they went ahead with their foolhardy project. Whereupon they acted shocked when the artificial intelligence they’d foolishly constructed went haywire and started to slaughter them. This is where you come in.

As the protagonist of this 2D action-puzzler, you’re charged with defeating the planet’s robotic overlord. This entails leaping, dodging and teleporting your way across 80+ conundrum-packed levels. Your endeavour is made marginally easier because your character, a young girl, can create a temporary duplicate of herself, which you then control while she stands dormant. This remarkable ability not only lets you test the waters by sending your clone to their doom, but becomes crucial to solving the game’s puzzles.

Yet BOOR‘s most striking aspect is not the sheer number of levels, the protagonist’s strange powers, but its stunning visual style. The game sports a near-monochrome aesthetic, red being the only splash of colour in the whole game. But far from being grim and gritty, BOOR is strangely uplifting in tone. 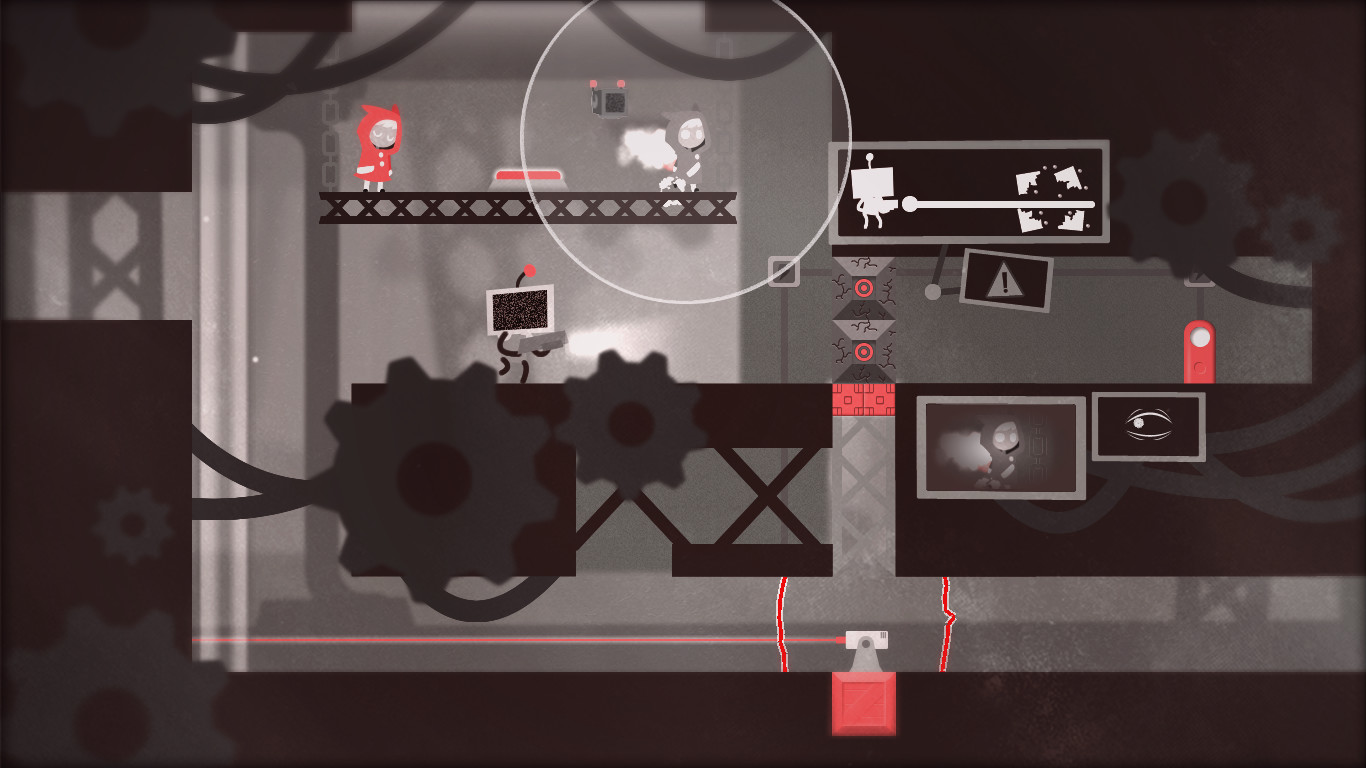 The protagonist’s crimson attire evokes Red Riding Hood, lost in the mechanical wilderness beneath the planet’s surface. And despite her pupil-less eyes, an attribute she shares with the game’s NPCs, her vulnerability and willingness to undertake this mammoth journey makes her genuinely appealing. You’ll feel a twinge of guilt each time she meets her demise, though the lack of a corresponding arterial spray does soften the blow somewhat.

And die she will, since BOOR‘s puzzles are frequently life-threatening. While you are briefly thrust into the daylight, you spend the bulk of the game wandering through Portal-esque test chambers. Barring the occasional boss encounter, escape is a matter of reaching the right hand side of the chamber. Though any number of hazards may stand in your way.

You may be required to activate several buttons at the same time, which is where your clone comes in, though matters are complicated by the fact that your clone expires after a brief period of time. Then, just when you’ve become comfortable with that mechanic, the game will throw you a curve ball by asking you to operate three buttons. The latter may seem like an impossible task, since while you can clone yourself an infinite number of times, there can only ever be one clone in existence.

So you sit, scratching your head, wondering how you’re going to accomplish this, and then it hits you.  What if you…? I won’t spoil the rest, for fear of taking the joy out of the game. And BOOR is an utter joy.  The moment of epiphany when you comprehend and subsequently solve a puzzle is nothing short of exhilarating. And then, a few levels later, BOOR pushes you out your comfort zone by introducing a new hazard or mechanic which must be mastered. Yet despite this, you’ll never once feel overwhelmed.  Nor are you ever dependent upon trial and error, which makes success all the sweeter. 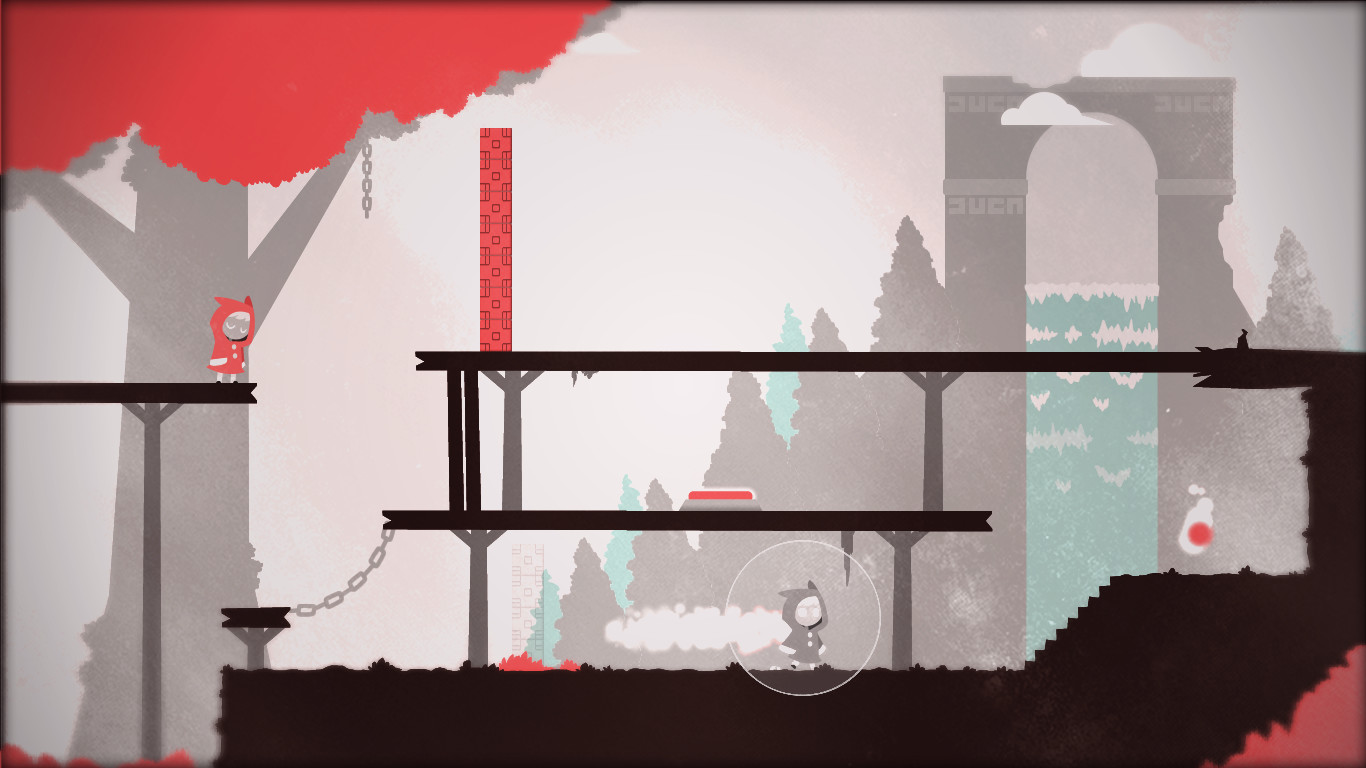 Failure is, however, a very real possibility. Your character’s demise, which results in her being reconstituted at the entrance to the respective room, is hard to miss. Aside from stationary spikes, you’ll also have to deal with the odd roving robot and slow-firing missile launcher. These don’t actively pursue you, unless you step close to them, so you can still approach the levels at your own pace. They can also prove useful in solving puzzles, provided you can keep out of the way of their weapons.

But, and this is where the game’s one flaw raises its ugly head; it’s not always obvious when you’ve failed a level because you’ve done something in the wrong order. On a few occasions, I was puzzled as what to do next when it dawned on me that I’d hit a switch too soon, or failed to destroy a crucial block. This wasn’t exactly a grand imposition, but it would have been preferable for the game to advise me that I’d messed up.

BOOR‘s storyline, while not exactly epic, will keep you invested in your lone character’s fate and, to a lesser extent, the fate of the planet’s other inhabitants. That said, your impetus for playing will always be the drive to solve the game’s taxing yet rarely frustrating puzzles. And while it’s packed with enough content to support a mid-priced game, BOOR is being sold at a budget price.

Despite the aforementioned grumble, BOOR remains an enthralling, charming game that, with its beautifully rendered, challenging levels and innovative central mechanic, will have you hooked from beginning to end.

BOOR is available on PC.