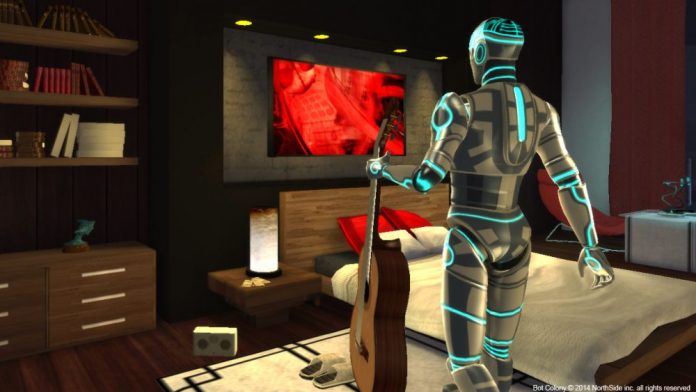 Bot Colony is not, as the name might suggest, about a group of sentient arses. Instead, this cybercentric adventure deals with the rise of artificial intelligence.

Launched through Steam’s Early Access, meaning it’s currently incomplete, Bot Colony is something of an oddity. Its store page contains the grandiose promise that “you actually get to EXPERIENCE robot interactions that were just a sci-fi fantasy in movies like Her, Ex Machina, iRobot, Blade Runner and 2001 A Space Odyssey.”

Yet my initial interactions with the game were anything but futuristic. After two hours with the game, I wanted to rampage through the game’s ‘Arrival’ level taking a hammer to every synthetic life form I encountered. Not because the robots I encountered were overtly hostile, but because communicating with them was such a trial.

I’d bypassed what I took to be the initial training mission and jumped straight into Bot Colony‘s main story. The game’s premise is that your character has been sent to an island, nicknamed Bot Colony, which serves both as a robot manufacturing base and a resort of sorts. Something untoward has been happening on the island and it’s up to you to get to the bottom of things. 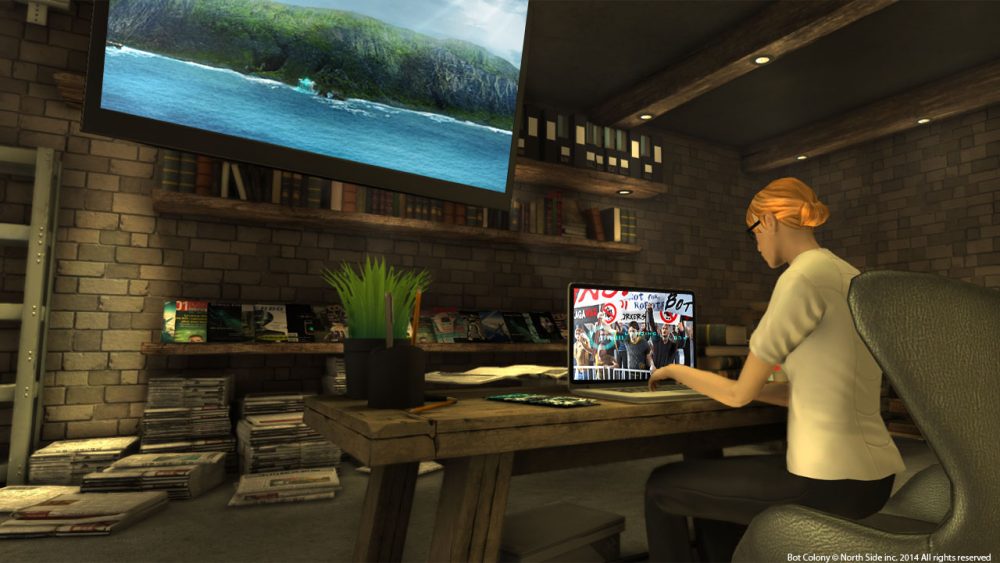 The game, as is, only contains a tiny chunk of this storyline, requiring you to leave the island’s landing pad and find transport to the main resort area. Even this left me with steam pouring from my ears as I struggled to interact with the robots.

Shortly after landing, the game presents you with not one but two baggage retrieval tasks. Both of these involve ordering a baggage handling robot around, issuing the necessary commands for him to retrieve a bag. The first time you have to do this, it’s because you want to claim your own luggage. The second time around, it’s because you’ve got to recover and destroy a live bomb.

From a narrative standpoint, these situations are both utterly absurd. Not only are the robots incapable of retrieving baggage on their own, the island’s owners apparently believe that it’s appropriate for a flesh-and-bone human to be forced to assist in bomb disposal. Furthermore, interactions with the robots appear to be entirely hit and miss.

Here’s an example of a ‘conversation’ I had with the baggage handling robot:

“Get the green briefcase on the bottom Malina shelf.”

I wasn’t programmed with the turn command.

“Get this briefcase.” (pointing to briefcase)

It is too far to reach.

“Put the green briefcase on the X-Ray machine.”

It is already on the X-Ray machine.

“Put the green briefcase in the X-Ray machine.”

It transpires that not only does a robot lack even the intelligence to move towards an object it is asked to pick up, but it glitches out whenever you use ‘get’ instead of ‘take’. At this point, even considering the game’s Early Access state, I’d mentally assigned Bot Colony to the scrapheap. There was one glorious moment when I got one of the robots to say she “Shot a man in Reno, just to see him die,” but aside from that, it was a miserable experience.

And then, something odd happened. Having completed the ‘Arrival’ mission, after finally managing to dispose of the bomb, I decided I might as well delve into the game’s tutorial mission, dubbed “Intruder”. After all, how much worse could it be?  Ten minutes later, I sat there aghast in disbelief. This… this was halfway decent! 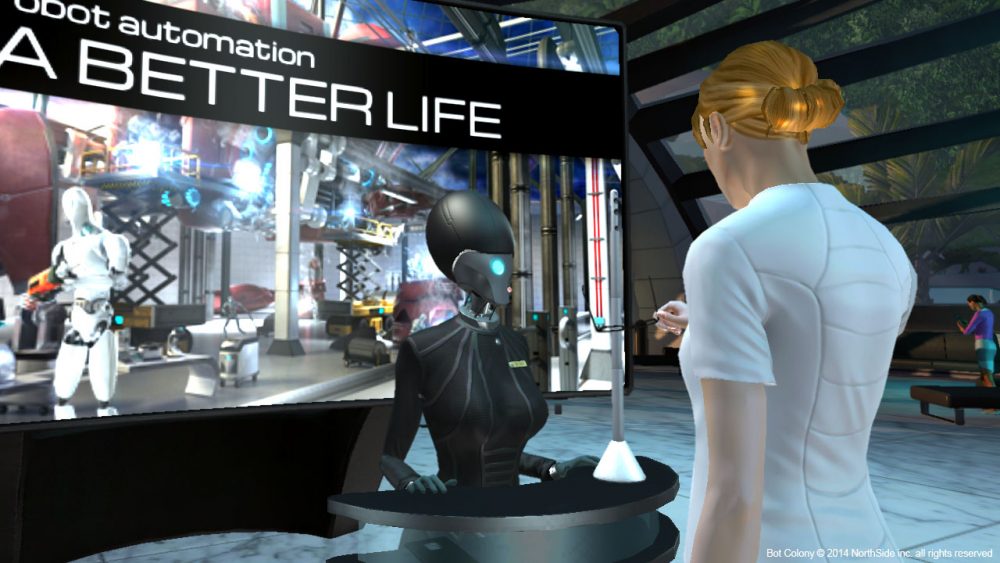 The reason for this shocking contrast has to do with Bot Colony‘s checkered history.  The game originally hit Early Access in 2014, but was removed in March 2015 due to low sales. Fan support apparently convinced the developers to resurrect the game and,  in February of this year, added this new mission. And even though Intruder is ostensibly a virtual training mission, it outshines the rest of the game in every respect. Even the graphics, while they’re nothing to write home about, seem a little sharper than those found in Arrival.

As is the case with the game’s other mission, Intruder does hand you control of a 3D character. But while you will occasionally need to move around to avoid unwanted police attention, you spend most of your time gazing through a house’s security cameras. The house belongs to a noted research scientist who was recently robbed and it’s up to you to determine why there was no-one in when the house was robbed and to cover the thief’s tracks.

These objectives seem oddly contrary, but uncovering the family’s coming and goings is so voyeuristically satisfying that you likely won’t care. A key element of this is interrogating Jimmy, the house robot, who will help you build up a full picture of just what transpired that evening. Aside from verbally relaying events, he can also replay his video memories of key events, which may serve to back up your suspicions.

Unlike the woefully inadequate robots featured in the game’s other chapter, Jimmy is capable of understanding plain English commands. You can also use the game’s speech recognition system to converse with him, which works surprisingly well. Though if you’re a fairly adept typist, you’re better off sticking to the keyboard. 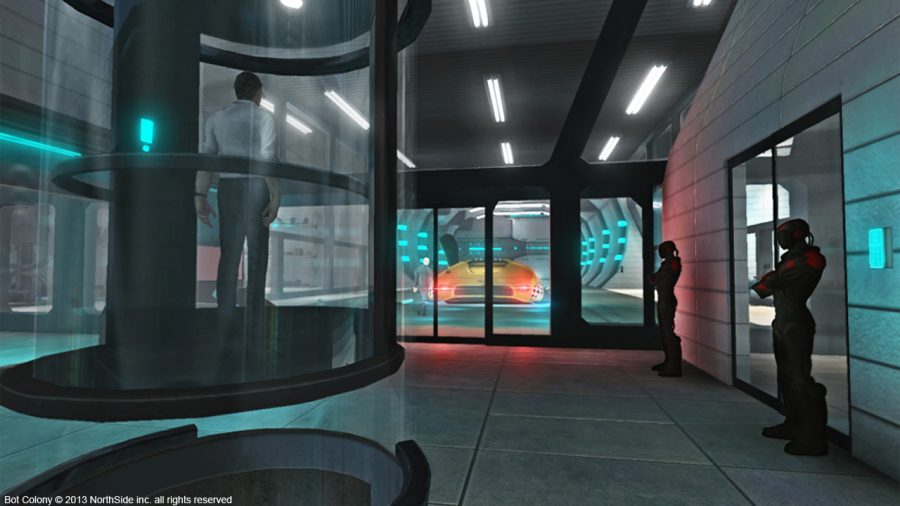 The difference is like night and day. While your interactions with Jimmy still don’t quite match up to the bold promises made on Bot Colony’s Steam page, they are much more fulfilling. You also don’t need to remind him to walk to a particular room in order to manipulate an object, since he is largely autonomous. Here’s a typical conversation with Jimmy (altered slightly to avoid spoilers):

“What time did the intruder arrive?”

I don’t have an exact answer but I know he arrived at the house.

“What time were you hacked?”

Ayame was near the sofa.

Where did she go next?

Ayame went to the door at 12:00, carrying a bottle of Whiskey.

“Jimmy, put the alarm clock on the bedside table.”

At which point he went  to the correct room, picked up the clock and places it on the table.

It’s not exactly Blade Runner‘s Voight Kampff test, but few, if any, games, offer this level of unscripted interaction. The game’s use of voice synthesis, which makes sense in this context, means that all the robots are fully voiced. Their pronunciation isn’t always dead on, though I still grinned like an idiot when I was able to get Jimmy to address me as Bruce Wayne. I spent a good hour picking through Jimmy’s recollections and even though we weren’t discussing anything deep, it was curiously satisfying.

In its current state, Bot Colony definitely has promise, provided that the game’s developers build on the quality of ‘Intruder’. Whether you want to take the plunge and fund this is another matter, since there’s not a great deal of game in its current, uneven state. But if the idea of artificial intelligence intrigues you then it’s definitely worth a look.