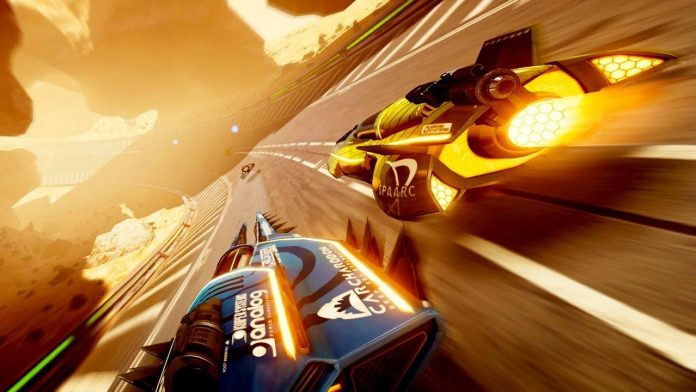 Whenever a new console launches, there’s always a racing game amongst the initial line-up of titles isn’t there?

Not that I’m complaining – a good racer is always appreciated to waste some time, especially in the early months when titles are thin on the ground. For the Nintendo Switch, Fast RMX fulfils the launch day racing game duties. But is it worth picking up?

Essentially a revised and expanded port of Fast Racing NEO, released on the WiiU at the end of 2015, Fast RMX is an anti-gravity racer much in a similar vein to F-Zero. It boasts 30 beautiful yet occasionally mind-bending tracks spread across a multitude of varied locations and 15 wonderfully aggressive looking vehicles – most of which you’ll need to unlock by playing – each with their own parameters. It doesn’t quite feature all the game modes you’d expect a racing game to have though.

Championship mode – the main attraction of Fast RMX I’d say – tasks you with making your way through 10 cups, each consisting of three races. Difficulty wise, Fast RMX starts out extremely challenging before becoming more welcoming as you learn to adjust to its extreme speed and unique colour phasing mechanic. It’s this colour phasing mechanic that really separates Fast RMX from its competition, and mastering it is key to success. With the press of a button you can change the luminous glow your ship emanates between orange and blue, and matching the colour with specific elements on each track results in a speed boost and/or jump. Get it wrong however, and the consequences could prove to be dire.

Including acclimatising yourself to its controls – which can be entirely user defined by the way – you could quite easily make your way through all of Fast RMX’s championship mode cups within a few hours. Fortunately though, there’s more to it than that. Initially only having access to the novice league, achieving podium finishes in a number of cups eventually opens up the advanced league, offering the same cups to play through yet again but with more speed and therefore more difficulty. And it doesn’t end there either; completing most of the advanced league then opens up the expert league; a true test of your reactions that I imagine will prove to be an insurmountable task for many. 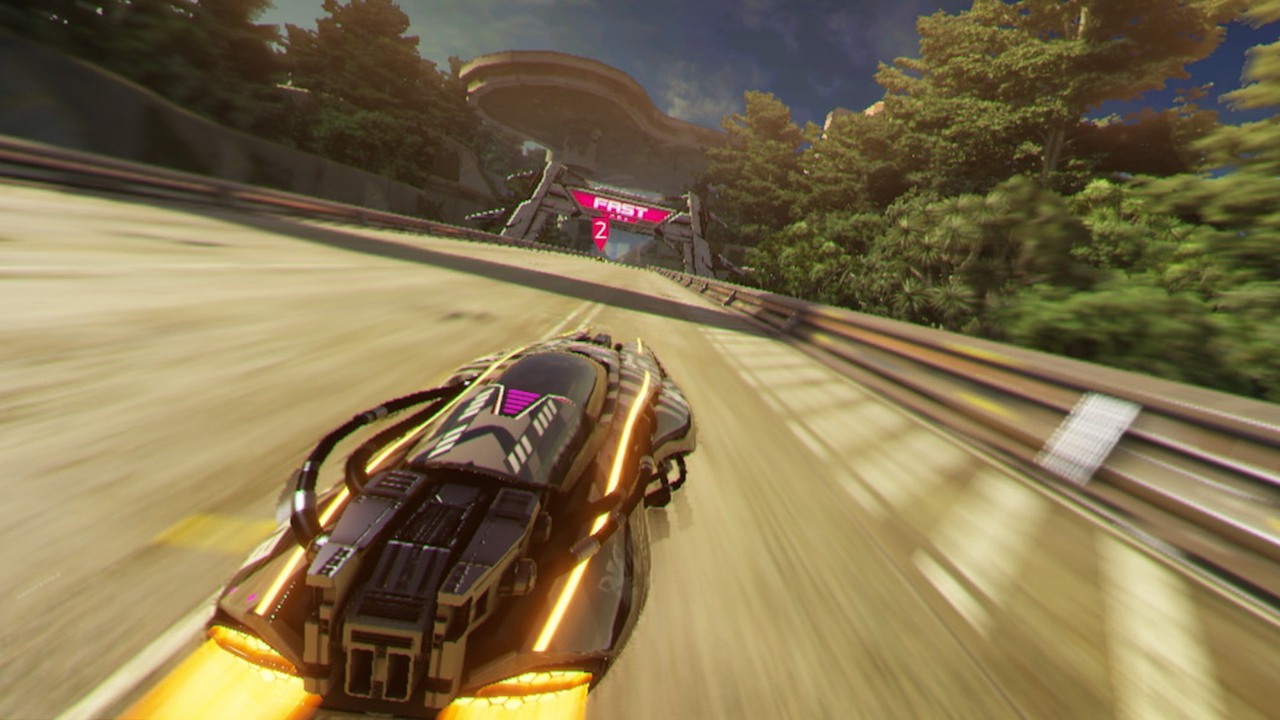 It makes for perhaps not the most exciting form of progression, but Fast RMX is unashamedly a straight-up arcade racer after all. There’s no tweaking your vehicle settings, no weapons with which to destroy your opponents, no upgrades to increase performance; just pure, adrenaline-fuelled racing action. If that sounds like your idea of fun, conquering all of Fast RMX’s championship cups will prove to be a considerable time sink.

Believe it or not, there’s an even greater challenge than championship mode available too, in the form of Hero mode. In this mode you can select any one of the game’s 30 tracks and try to emerge victorious with a shared boost and shield gauge. It makes for a tense experience in which you need to strategically use your boost to remain competitive, but also preserve enough energy to compensate for any minor bumps you may have. Deplete all of your energy with a crash, big or small, and it’s the end of your racing endeavours. Honestly, Hero mode is not for the weak of heart.

Multiplayer is Fast RMX’s final offering, including split screen, online and local play. Unfortunately I’ve not been able to test Fast RMX’s local multiplayer option as I don’t know anyone else in close proximity with both a Switch and a copy of the game, but I can confirm that split screen and online multiplayer work rather well. When playing online the racing was smooth and there were no connectivity issues, though without the ability to create your own games and invite other players into them, your options are fairly limited.

Fast RMX omits some standard modes like Time Trial and Exhibition Race then, but its developer Shin’en Multimedia has already stated that a Time Attack mode is to be added soon as well as online friend support. To be honest though, for its budget price point, Fast RMX still delivers the goods without these extras. The core of the game – the actual moment to moment racing – is what matters the most, and I’m glad to say it’s always a joy. The controls are intuitive which makes racing around its large number of tracks a pleasure, and the solid audio and visuals further enhance the experience. For a launch title you couldn’t really ask for anything more. 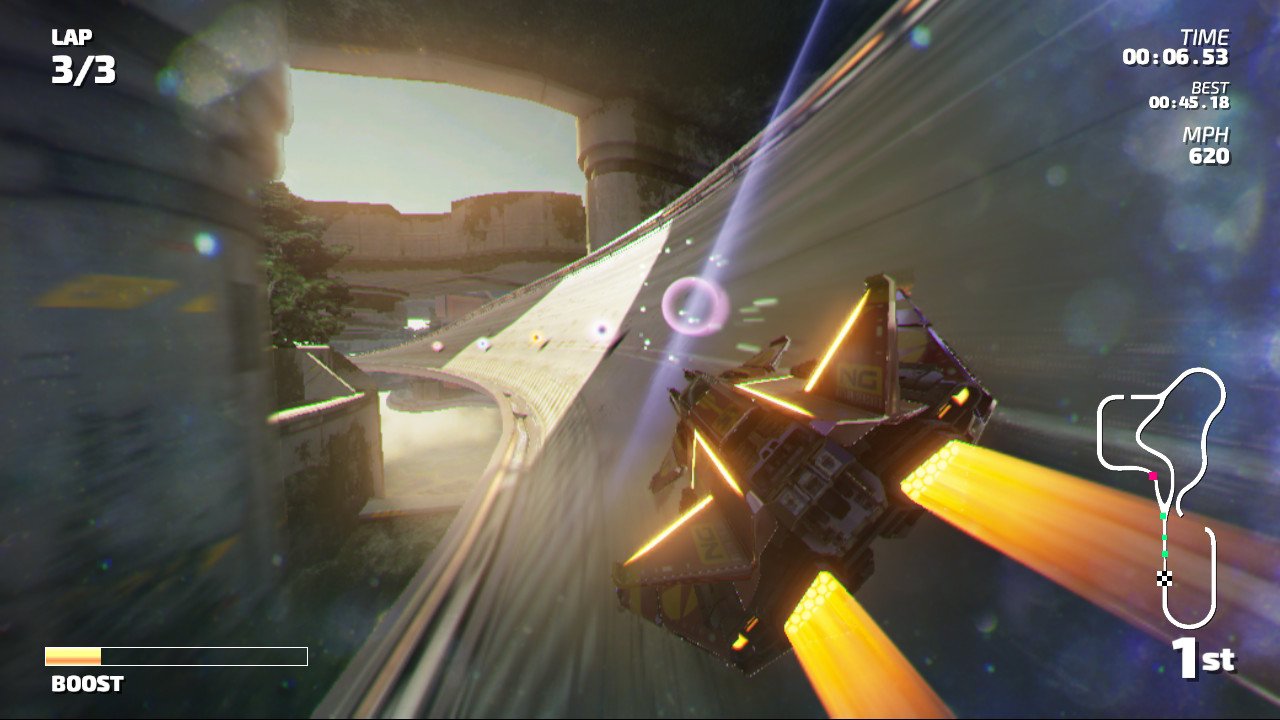 The Switch may have only just launched, but it’s off to a great start with titles like Fast RMX. It may be little more than a port with spruced-up visuals and a smattering of new content, but it’s a bloody good one, so if you have a penchant for arcade racers you should definitely pick it up. It’ll certainly keep you entertained until Mario Kart arrives next month at least.