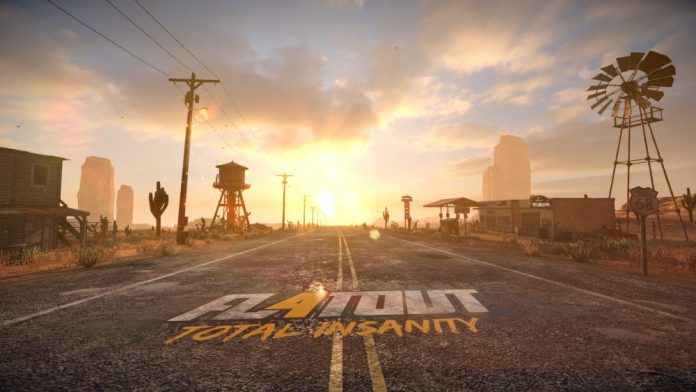 Created by Finnish developer Bugbear Entertainment, FlatOut quickly garnered a bevy of fans upon its release in 2004 thanks to its impressive physics and amusing destruction derby style gameplay.

It spawned a successful sequel which went on to be enhanced and expanded upon as a separate release, but then development duties were handed over Team6 Game Studios and things went more than a little bit wrong.

FlatOut 3: Chaos & Destruction was quite simply abysmal. So bad in fact, that you’d have understood if the series was dead. After demonstrating their ability with the surprisingly good WRC 6 however, development duties have been handed over once again, this time to Kylotonn Games who are hoping to return the FlatOut series to its former glory. Do they manage it? Not quite, but FlatOut 4: Total Insanity is certainly a step in the right direction.

If there’s one thing you can say about FlatOut 4: Total Insanity it’s that it’s not short on content. Career mode will have you working your way through three car classes, each bestowed with eight multiple race championships and eight special events. Whether you’re racing, completing a time trial or battling it out in a survivor event, you’ll earn cash for your endeavours, using it to buy, upgrade and customise over 25 cars. But all that’s fairly standard in this day and age, right?

Things are kicked up a gear though when you enter FlatOut mode – essentially a second career that is driven by the acquisition of points rather than cash. Starting out with only a handful of its 42 events unlocked, driver-ejecting stunts will need to be performed, checkpoints  will need to be driven through, and combos will need to be strung together in order to beat targets and further your progression. It makes for a nice diversion from the more po-faced career mode and allows you to show off your skills via online leaderboards. 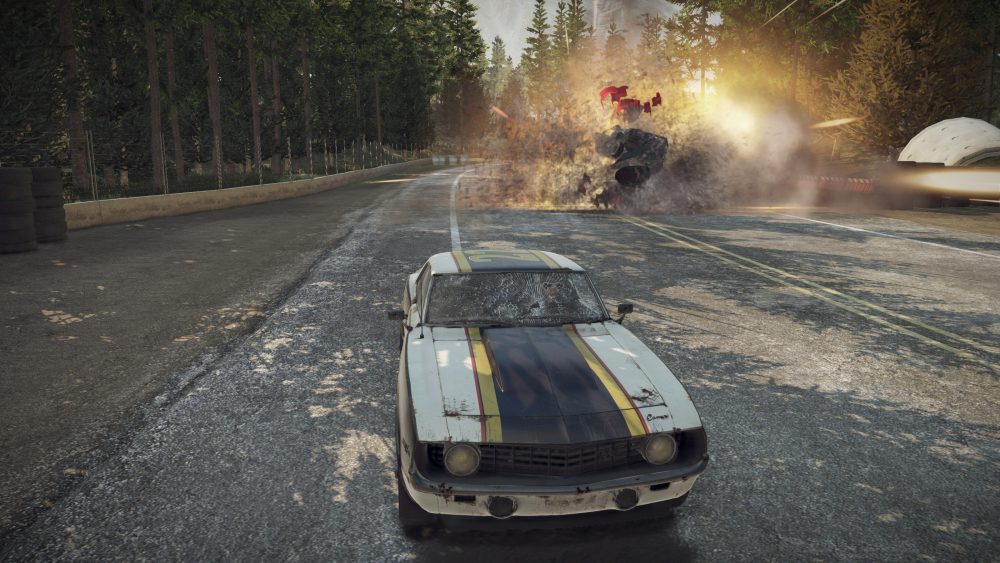 And it doesn’t end there. In Quickplay you can jump into any type event you like, whether it’s an assault race in which you get to make use of a small selection of weapons, a violent self-explanatory deathmatch, or even a spot of unorthodox billiards. You can do most of that in the online multiplayer mode too, and even local multiplayer fans are appeased thanks to the stunt focussed pass the controller Party Mode. FlatOut 4: Total Insanity really does try to cater for all occasions and tastes, but whilst it makes a commendable attempt, it does often frustrate along the way.

For a start, it’s a bit of a problem that FlatOut 4: Total Insanity’s gameplay systems often feel like they’re at odds with each other. Progress through the career, for example, is powered by you achieving podium finishes, but to do that you’ll need to earn cash to buy and upgrade vehicles. The main source of this cash is bumping and grinding with the opposition as you race, but the uncompromising car physics and aggressive A.I. means doing so usually leaves you facing in the wrong direction or stuck in an object at the side of the road. So, unless you’ve got a car that severely outclasses the competition, you’re left with a choice: earn lots of money but have to replay events multiple times, or win by driving relatively cleanly and earn a pittance. 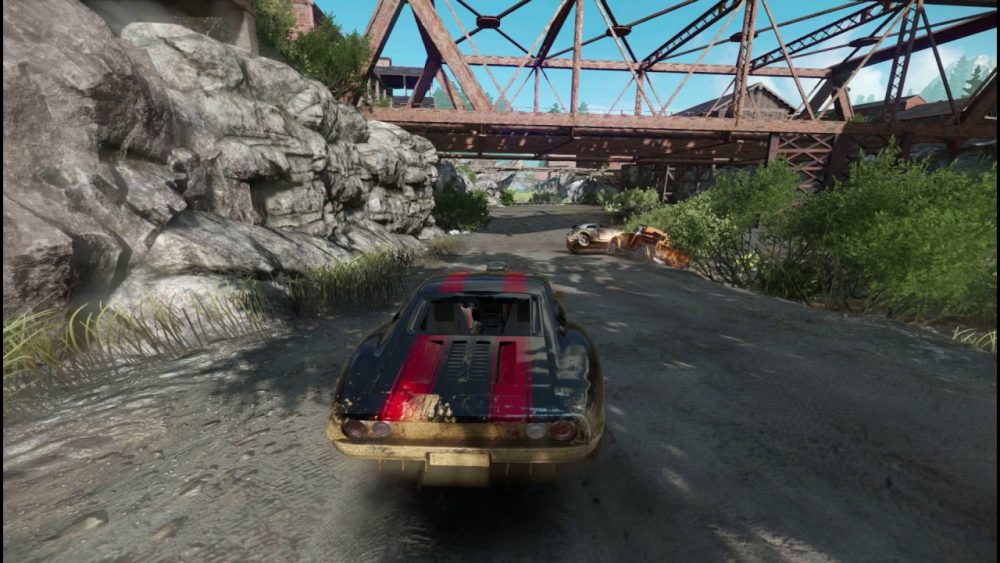 FlatOut mode’s Carnage events have a similar problem. You need to create combos by crashing into the opposition and destroying objects on and around the track to score points, a multiplier linked to your current racing position providing an essential boost. It’s a sound idea, but in practice you’re likely to find yourself floundering around the track, bumping into the opposition and scenery with reckless abandon before trying to use your store of nitrous to catch up with those in front to no avail. It’s telling that, at the time of writing, no-one has managed to achieve a gold medal on even the first Carnage event according to the game’s online leaderboards.

If you work at it, maybe in time you can find a healthy balance between racing and destruction, but you shouldn’t have to; fun is something that should just come naturally to an arcade racer. I hate unfair mechanics like rubberbanding with a passion, but in games like this there’s a real need for it to prevent frustration. FlatOut 4: Total Insanity would undoubtedly be a great deal more enjoyable if it was more lenient; if the pack stayed closer together at all times; if you could confidently take the battle to other vehicles without feeling like it’ll just lead to failure.

FlatOut 4: Total Insanity is at its best then when its focus is singular. The solid handling and sprawling tracks make for enjoyable races if you approach them with the mind-set of just driving fast and finishing first. And the arena based survivor and deathmatch events are always a pleasure as all you’ve got to worry about is causing vehicular violence. It’s when you want or need to combine the two that things start to fall apart. All of this doesn’t mean that FlatOut 4: Total Insanity isn’t at least worth a look though. There’s still a lot of fun to be had within its Career and FlatOut modes, it’s just that sometimes you’ll be close to tearing your hair out in despair as well.

In this case, total insanity doesn’t equate to total fun; it equates to frequent failure. Albeit, often financially rewarding failure. No, the finer moments of FlatOut 4: Total Insanity are to be found when it’s either being more restrained or just all-out daft: when you’re chasing checkpoints around a cluttered track with a clapped-out old banger to prevent it from blowing up, or flinging your driver from their seat just to see how high you can get them. It maybe shouldn’t be that way, but it just is.

FlatOut 4: Total Insanity is available now on PS4 and Xbox One. We reviewed the Xbox One version. 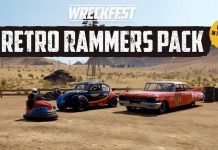 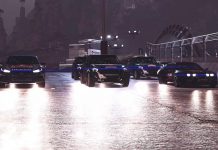