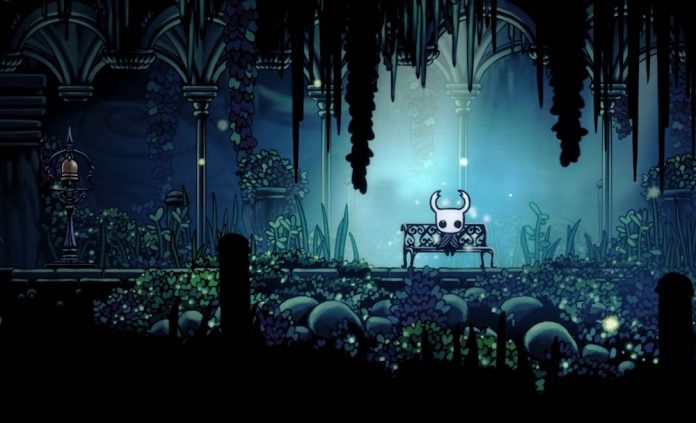 Hollow Knight borrows heavily from its contemporaries – both inside the metroidvania genre and out – but still provides a lengthy and thrilling journey through a subterranean land fraught with tragedy, wonder and lots of death.

It’s strange looking back to my early hours in Hollow Knight; I’m thirty hours in and nowhere near finished but I know Hallownest’s vast, twisting caverns like the back of my hand. Of course, while venturing through fungal wastes and overgrown caves, I made sure to purchase Cornifer’s much-desired maps – yet I no longer need them. I could travel from the very depths of the eerily-static Ancient Basin to the peak of the Howling Cliffs without stopping for a breath; making use of every memorised shortcut and secret path unlocked on my still-evolving journey.

Yet, looking back at my first steps outside the forlorn town of Dirtmouth, I remember the dread. As soon as I jumped into the caves, I was lost. Hollow Knight gives you no map, no compass, no guidance; instead, you’re set loose into a gloomy, intertwining world solely inhabited by you – and many, many creatures that want to see your end.

It’s foreboding, it’s dark, but it’s also a joyous change of pace from the modern trend of map-markers, directions and waypoints. Helped too, by Team Cherry’s wonderful art style: intricate and detailed, but subdued enough that everything is given a thematically-appropriate gloomy and muted tone. And throughout each passage and ever-linking corridor, a haunting, piano-led soundtrack follows. Accentuating that this, once vibrant world, is long gone; a somber reflection to a bygone era. 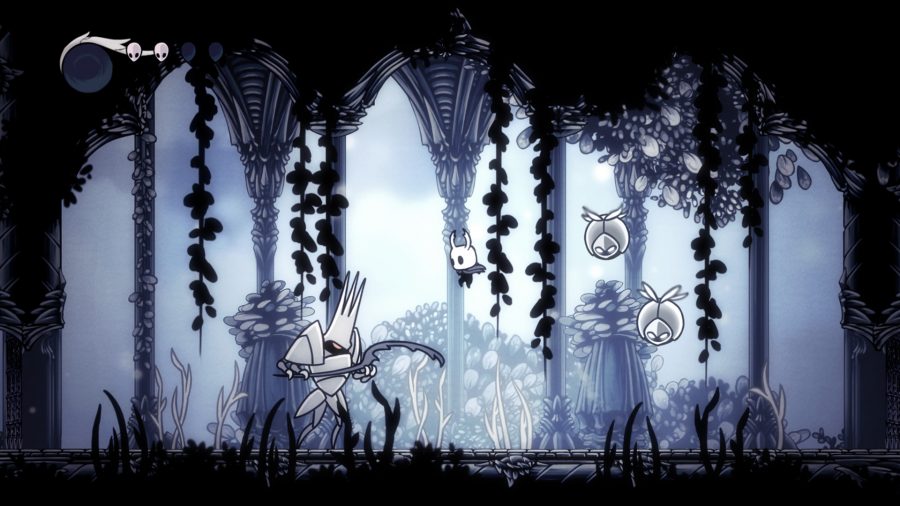 Every now and then, however, violins will creep in – or, rather, quite often. As a metroidvania, combat is visceral and comes often. At first, you have little more to attack with than your trusty needle – of course, being a bug, a sword would be too large! But as you play, advancing deeper and further into an endless, entwining cave, you’ll find many skills, abilities and charms to improve and change the way you play, as well as suiting it to your own style.

Varying dashes and double-jumps further enforce the pace of gameplay while numerous powerful spells add a risk-reward element. You don’t have much health – and death is a common sight – so conserving ‘Soul’ to heal is practically a necessity, but most spells require some to function. Charms provide the biggest modification to combat but, with scarse slots, only a few can be used.

Simpler modifications can make combat more manageable; further range on attacks, higher soul on hits and so on. Others, more advanced, can completely change how you play. One, which became part of a set I used to help on especially difficult bosses, changed how health works. I often had trouble with particularly swift bosses not giving me much of a chance to heal; my new charm allowed to me to have much more health but at the cost of not being able to heal.

I later found other charms which melded with this playstyle very well, and soon I had two entirely different ways of playing: one for bosses, one for getting around. Of course, with time, I probably could have beaten those enemies normally but Hollow Knight gave me the option – and lots of charms – to create my own way of dealing with them.

That was early on, and around ten hours later, I ended up finding that same place but from a back entrance. While I’d already been there and (hopefully) fully explored it, I appreaciated that Hollow Knight gave me a chance to see something I may have missed. It also enforced something else that, at times, reminded me of the original Dark Souls; just how brilliantly interconnected some of the world was. 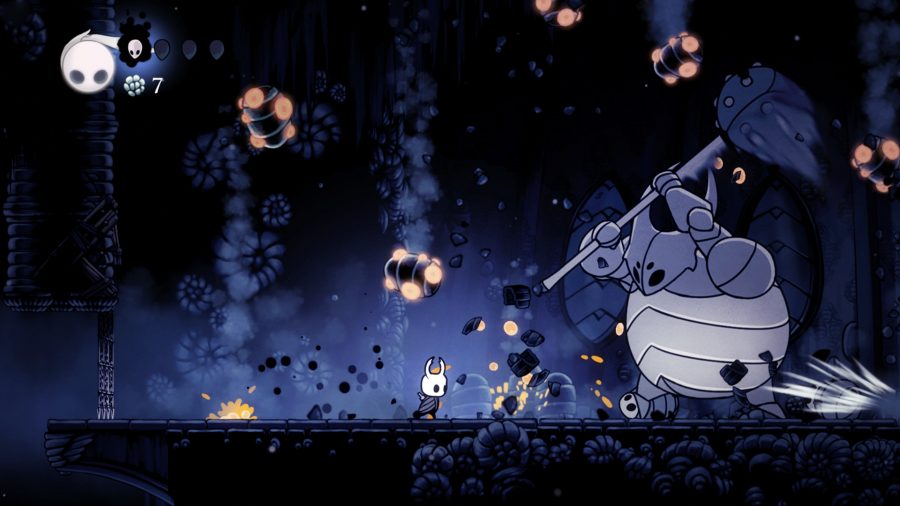 It’s that freedom and ability to wander off track for – quite literally – hours that is one of Hollow Knight’s best features. At first, it allows you to just leave a challenging boss or section and traipse off somewhere entirely different then, later on, realising just how expansive and full of wonder Hollownest is.

Not that you’ll need to stray away from bosses too often – nor should you feel guilty doing so – for most are perfectly challenging. Some, especially those optional, can provide a true threat, forcing you to learn every one of their moves, signs and intricacies. However, nearly every single one is enjoyable. A rare thing for a game with so many bosses to fight.

As well as looking gorgeous, animations are fluid and smooth on both you and enemies, helped by responsive and precise controls. The one big niggle, however, is a stuttering problem still present a week after release. It’s worse in certain areas, and while I’ve been lucky, others have faced numerous annoying deaths because of it.

While combat is rarely anything but fun, vigorous (you can really feel each hit) and intuitive, some may find the extended platforming sections less so. While expected from the genre, Team Cherry do keep most of the sustained areas optional. Still, one can only take so many never-ending corridors filled purely with slashing-down jumps.

Hollow Knight is a rare treat. But it does borrow heavily from its brethren and give little original in return. Many abilties, skills and enemies feel similar to other metroidvanias, while the story and characters more than a little Dark Souls and Bloodborne. Yet, I don’t care – and neither should you. There’s something to be said for originality, but even the very best games are built from echoes of what came before. Over time, mechanics are refined and perfected; art-styles and soundtracks are made and suited exquisitely; a world of tragedy is turned into an adventure of wonder and adversity – and then, well, you get Hollow Knight.

It may not be wholly original, but Hollow Knight is without a doubt one of the best metroidvania games out there. Hallownest’s desolate world is built on an atmosphere of mournful sorrow. Its characters, few and far between with little to say, will become fast friends that you feel genuinely ecstatic coming across. With a massive, interconnected world that you’re free to explore without direction, and secrets hidden around every corner and over forty hours of content, Hollow Knight may not be entirely new but it is downright outstanding.

Hollow Knight is available on PC.