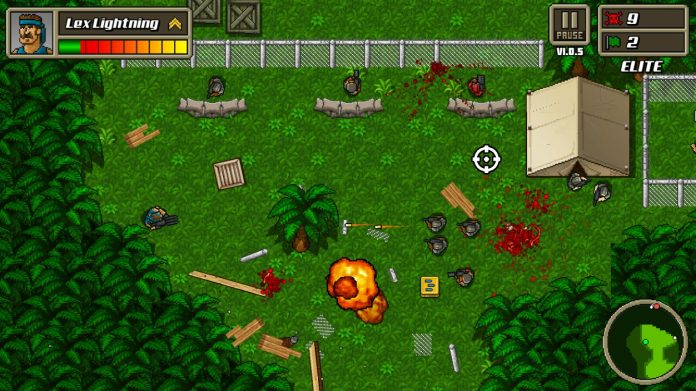 Kick Ass Commandos is a perfectly fine game. The art is nice, the gameplay is everything you’d expect from a top-down bullet hell shooter, and there is a solid amount of content.

However, the core issues with this game reside with the menus and its controller support – or rather, its lack of. It’s these little things that bog down the gaming experience, and can make an otherwise enjoyable game that bit more difficult to get through.

Of course, Kick Ass Commandos isn’t the only game guilty of committing this faux-pas; but as a game I’ve recently spent time with, it stood out to me as a good example of the importance of a well-designed UI and poor controller support that plague a number of games these days. The point of this article is to get people talking about the polish that isn’t thought about; that extra few days of work the developers could take that elevates their product to the next level, making it more enjoyable outside of the core gameplay. It’s also to vent a bit, because it gets exhausting to play so many games on PC with the exact same flaws and feel like it’s always going to be like this.

When it comes to the Xbox controller, there are a few standard buttons that remain the same across the majority of games. If you want to pause a game, you know you’ll have to press the Start button. If you want to jump in a game, it’s the A button. And if at any time, you need to back out of a menu or generally cancel an option, it’s the B button. This has been hammered into us from years of gaming, and no longer requires a tutorial to teach us this. When a game decides to go against this norm, however, it feels incredibly counterintuitive.

You can’t use B to back out of a menu in Kick Ass Commandos, but that doesn’t stop my reflexes from trying every single time I wish to return to the main menu. You see this sort of behaviour a lot in mobile ports, where the control scheme is barely changed from the touch controls. In the case of Kick Ass Commandos, it seems to have been a mouse and keyboard-focused game, with controller support haphazardly thrown in as an afterthought. 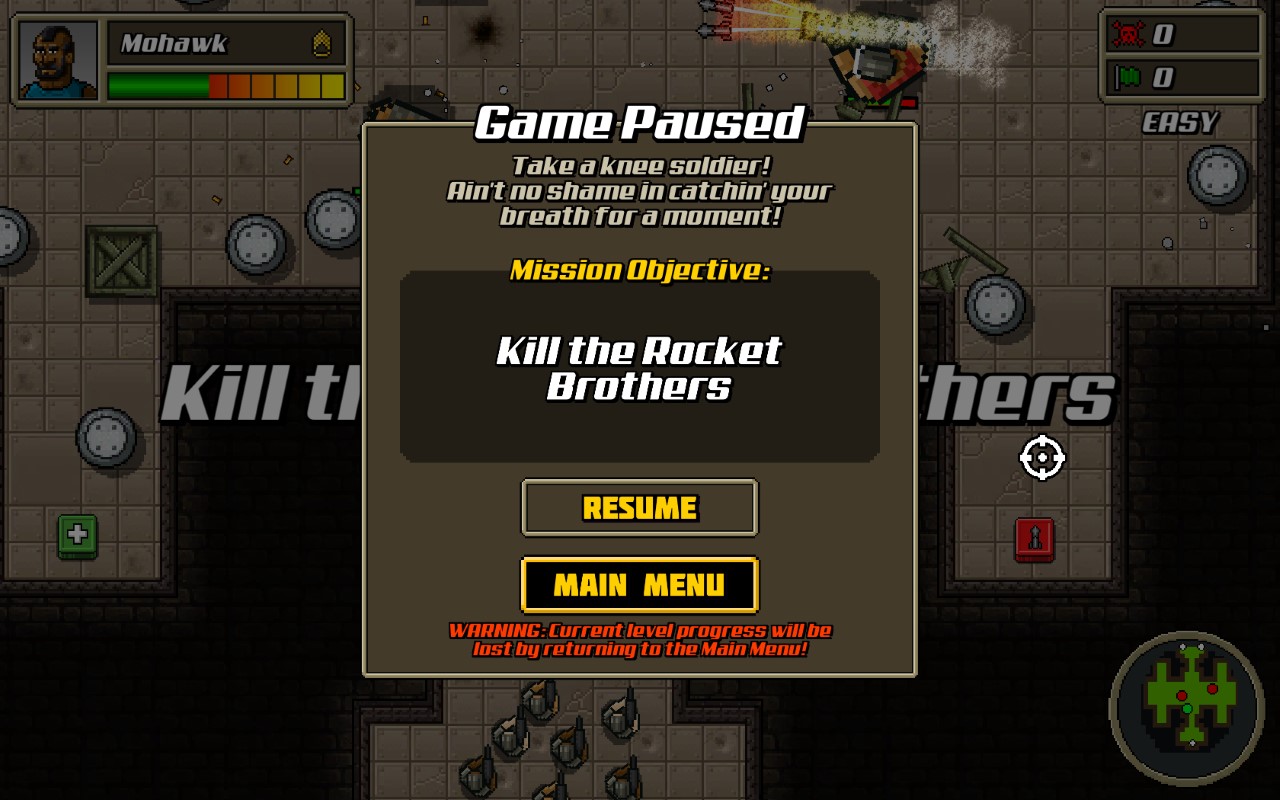 That’s some peculiar menu design so far, but it gets a wee bit worse from here. Continuing on our pause menu journey, we have just two options to choose from: Continue and Main Menu. The thumbstick, as it should, swaps between the two options. Now, which option to select…? Might be nice to keep playing, let’s hit Continue. A is the standard confirmation button in video games, let’s give that a shot. Hm, it made a sound as though we chose Continue, but we’re still staring at a pause menu instead of slaying baddies. Let’s assume Kick Ass Commandos decided to go against the norm and pick another button, X, Y, B, RT? Nothing seems to do anything. It’s as though when they advertised “full controller support”, what they really meant was “some controller support when we feel like it”.

Next, let’s talk about the character select screen. You have a collection of characters at the top of the screen, and a collection of bonus characters available at the bottom of the screen,with skills to level up in the middle of the screen and a ‘back’ button in the upper left corner. If you play Kick Ass Commandos with a mouse, then this seems like a completely reasonable layout. Click on the buttons you want with your mouse, just like any other menu. But if you’re playing using the full controller support, you’ll find the menu a bit harder to navigate. 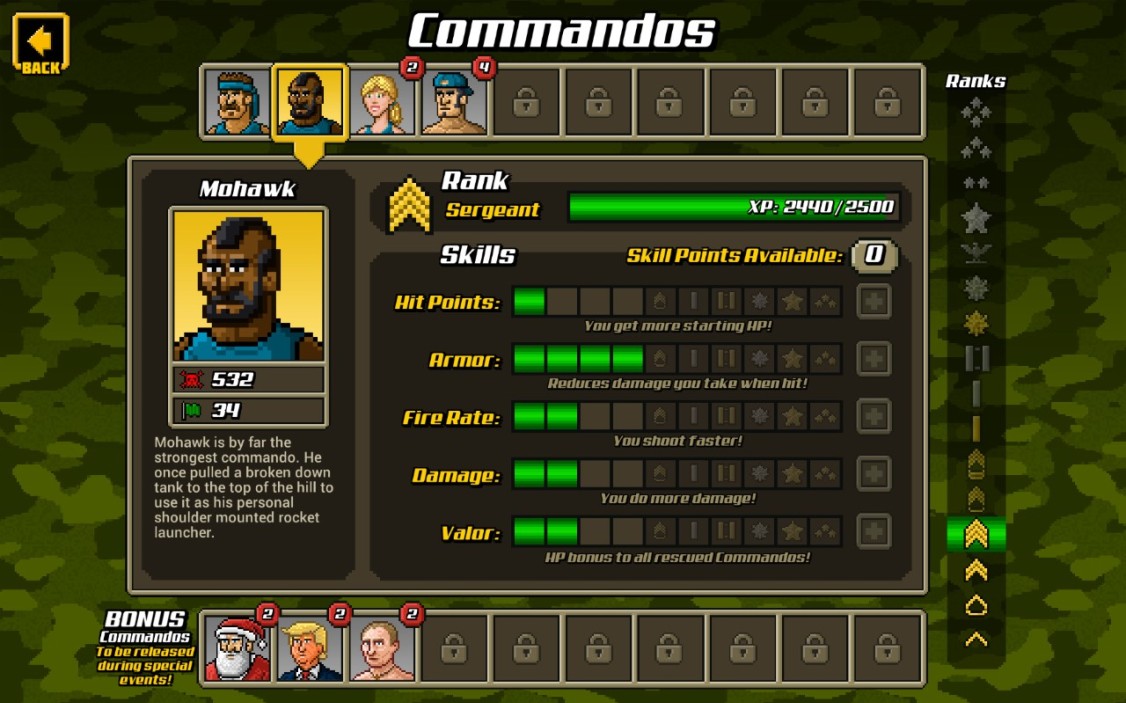 The player has to use the thumbstick to navigate the entire menu. Whether you want to switch between characters, jump over to leveling one up, or go back to the previous menu, everything must be switched using the thumbstick. The problem with this is that it’s clunky; it’s hard to tell whether flicking up will move you to the back button, the next rack of characters, or the levelling up. The advantage a controller has over a mouse are the buttons. You could easily transition between characters using the left and right bumpers and/or triggers, then only use the thumbstick or d-pad to move up and down the level ups. It’s control schemes like this that make it clear there was as little effort as possible put into actually navigating menus using the controller.

My last pet peeve is more to do with UI and the importance of feedback. In an example specific to Kick Ass Commandos, after beating a level, there is no indication on the menu screen whether or not you’ve completed it. This can get particularly confusing when a level has the prerequisite that you have to complete two others before unlocking it, but there is no way to tell which, if either, have been beat. Why?

To reviewers out there, I urge you to mention these such issues when writing about games in your reviews. To developers, taking the extra time and care to have your games fully support controllers, and making sure your UI gives the player all the feedback they need can be all it takes to make your ‘alright’ game a great one. I’ve experienced the frustration and tediousness of menu navigation and controller support first hand, so I know the struggle. But it’s worth it; it’s a little thing you can do that makes your game feel better. And your players will appreciate it, that’s why you can sort by games that fully support the controller.

A special shout-out to Kick Ass Commandos for being a great example of some classic menu and controller support issues. That being said, Kick Ass Commandos is still a good game to check out if you’re into the top-down shooter and/or bullet hell genres. There’s a lot of content to play through and explore if you’re not too turned off by sloppy menus and partial controller support.