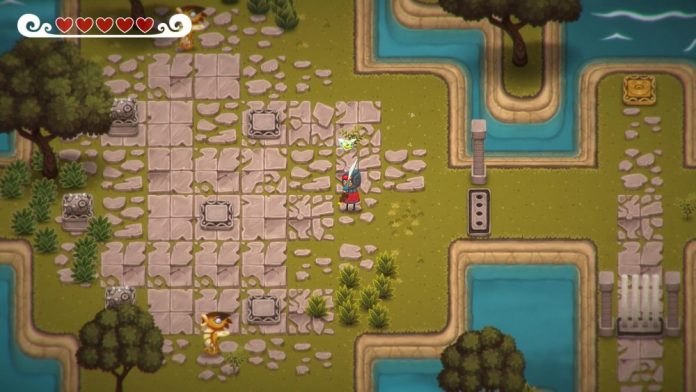 Guns, swords and fists are standard weapons in most video games.

There have been hundreds of variants of the desert eagle or longswords throughout gaming history. Once in a while though, a game decides to go against the norm with a weapon that can only be described as unique; the Keyblade from the Kingdom Hearts series, perhaps, or the shovel from Shovel Knight. Legend of the Skyfish introduces the latest addition to the quirky weapon family: the fishing rod.

Legend of the Skyfish begins in Fisherman’s Town. Its residents have fished for centuries, providing the town with food and wealth for generations. Eventually greed takes over and the fishermen begin plundering the deepest depths of the sea. This invasion awakes a great evil: Skyfish, the Lord of the Deep Seas. The Skyfish enslaves Fisherman’s Town citizens for their sin, sparing no one. One girl named Little Red Hook, however, is rescued by the legendary Moonwhale, warden of the seas. Now you take on the role of Little Red Hook in your quest to defeat the evil Skyfish and free your town from its shackles.

Your trusty fishing pole has two functions: slash and cast. Slashing sends out a wave in an arc around your pole, killing enemies it hits and activating levers it touches. Casting launches out your line with a hook attached to it, acting as a grappling hook. The grappling hook can trigger levers from afar, grab enemies and pull them towards you, or grab onto idols and pull you towards them. This combination of slashing and casting is the foundation of the game’s action puzzles.

The puzzles and combat in Legend of the Skyfish are rather simple. The combat consists of swinging at enemies when they come near, avoiding slow moving projectiles, and hooking them from other islands to bring them within slashing range. You certainly won’t have much trouble dispatching most enemies in the game without getting hit. Even the puzzles don’t add much of an additional challenge. The starting puzzles teach you how to get around, how to move blocks, and how to step on switches; basic tutorial stuff. The puzzles never really evolve past this, and I never particularly felt like I had to think about solving anything. There are certainly a couple of cute puzzles that were fun to complete, though every puzzle ultimately has an obvious solution. 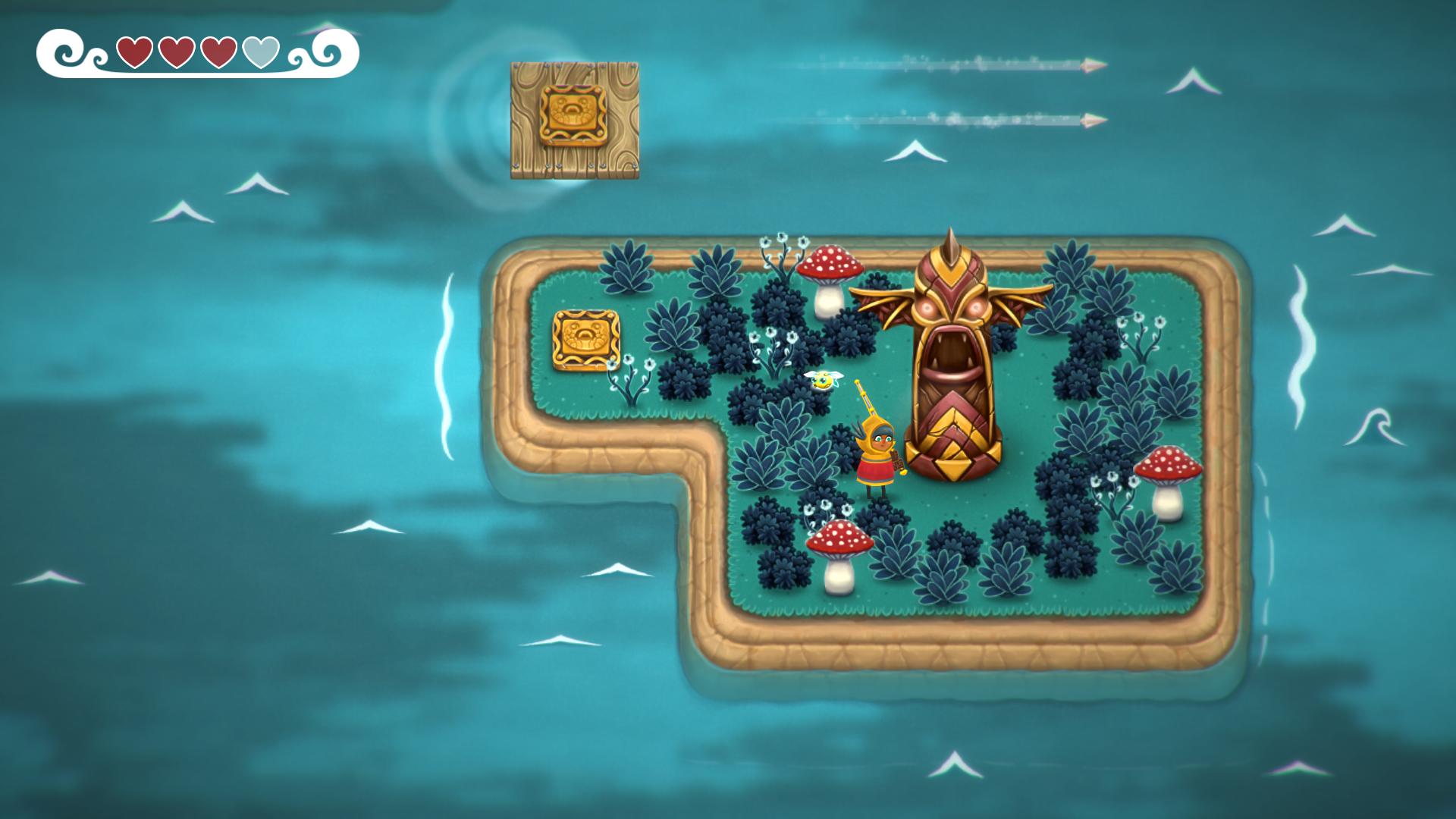 With that said, Legend of the Skyfish does advertise itself as “great for all ages” so it’s safe to assume that the simplicity of the game was designed in part for children. The lack of blood, swearing or difficulty allows it to be played by even the youngest and most inexperienced gamers, and in that regard it’s a great example of a game that can be enjoyed by children and adults. I feel like multiple difficulty levels would have been a better option, as the 42 normal levels can be beat without dying a single time by an experienced gamer. On the other hand though, the boss fights can pose a pretty decent challenge, and are a big leap in difficulty from the normal gameplay.

The boss fights are definitely my highlight of Legend of the Skyfish. The bosses themselves are all very cool, unique-looking sea beasts. Though there are a couple mechanics from the normal gameplay, these aren’t the focus in the boss fights; instead, it’s all about dodging incoming attacks and slamming on the enemy when they’re vulnerable. Each boss has a very different style and its own unique roster of attacks, resulting in memorable experiences – it’s just a shame there are only three of them.

Another big plus for Legend of the Skyfish is its hand-painted art style. It’s an incredibly pretty game that could almost sell itself on the art alone. Like the boss fights, the only real negative is that there isn’t quite enough of it. Playing through the game you’ll notice a lot of repetition. The three environments are slightly different, but feel more like a palette swap than anything substantial. The menu system and world map are clearly quick mobile ports, but they’re still crisp and clean: from the health bar to the pause menu, every element fits a simple style that is consistent throughout.

The menus can be a bit tough to navigate with a controller at times, likely due to being a port. One thing that’s odd is they refer to the buttons as R1 and R2, like the Playstation controller, even if you’re using an Xbox controller, which should be RB or RT. The other big disappointment with Legend of the Skyfish is that there aren’t any Steam achievements or Trading Cards. Achievements and Trading Cards are pretty standard these days, even with the smallest indie games, so their absence can be a deterrent for some to buy. 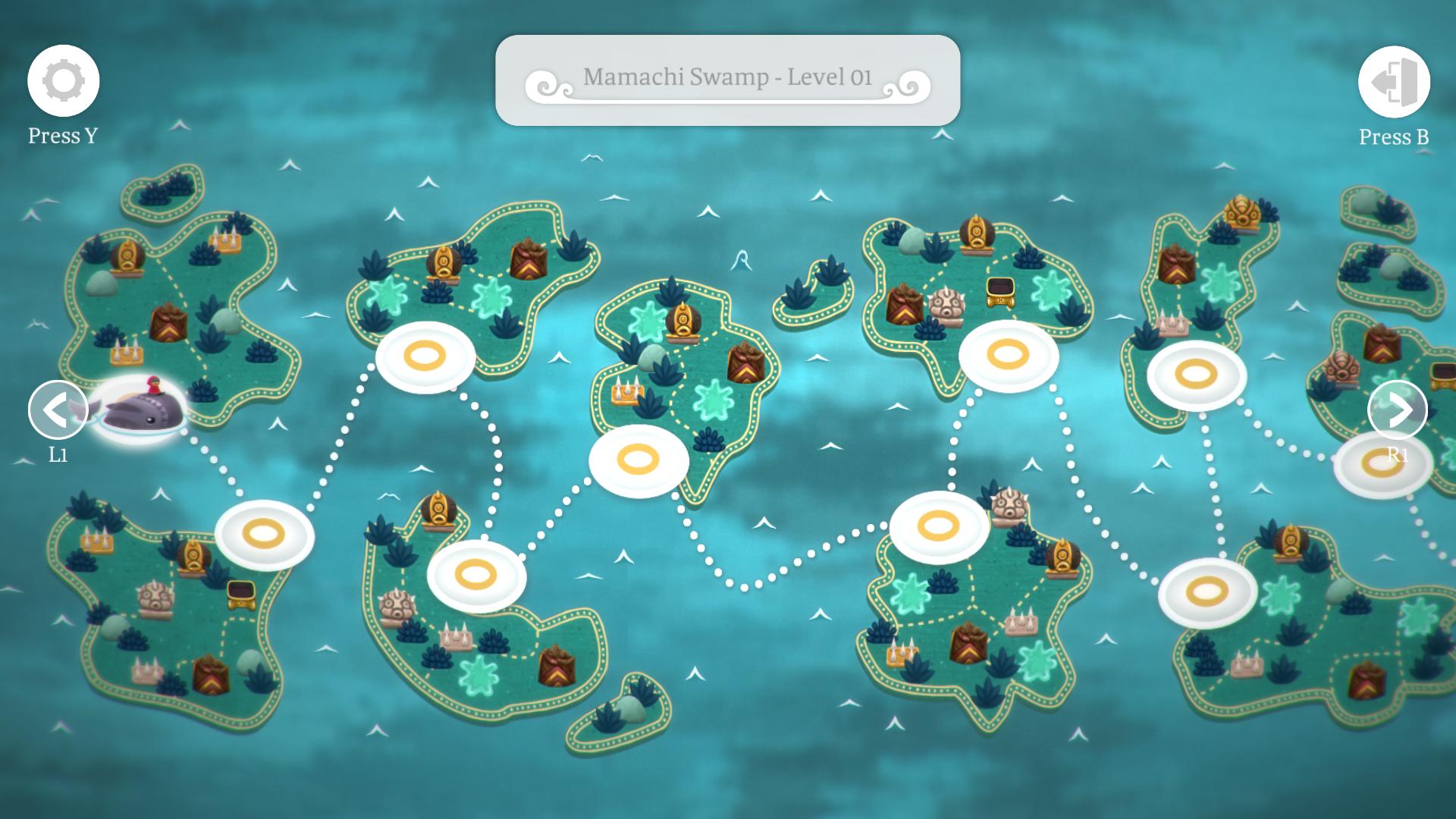 Achievements also act as at least some form of replayability in games. The lack of achievements in Legend of the Skyfish really drives home how you’ll only get a single playthrough out of your experience. Other than going back to collect any equipment you’ve missed, there isn’t any other incentive to play again.

The equipment in the game is interesting, but a bit lacklustre. There are three additional suits, rods, and casters to collect throughout the levels. Each one gives you a  completely different effect. For example, suits can either give you an an additional heart, decrease the range enemies can see them at, or enable you to move quicker. Although any bonus is nice, they can’t be upgraded further, so it’s just a matter of picking between which of the three options you’d prefer to use.

‘Good concept, but lacking depth and variety’ is proablythe best way to describe Legend of the Skyfish. Every element of the game is nice on the surface, but gets old quickly. The entire game can be beat in about three hours. If you’re looking for a nice action puzzle game for a younger family member to play, then Legend of the Skyfish is a solid choice. If you’re looking for a new game as an experienced gamer, then you’ll likely find your time with this game a bit boring. Legend of the Skyfish’s fishing rod likely won’t go down in gaming history like Shovel Knight’s shovel or Kingdom Hearts’ Keyblade, but it’s a nice little game that tried something new, and did a decent job of it.

In closing, it felt like Legend of the Skyfish’s story about fishermen getting greedy and exploring into deeper seas was meant to play on the current fishing habits we employ globally. There are a lot of issues with the way we fish as a society, and despite stricter regulations and general improvements, marine life still suffers greatly. So I’d like to include some interesting statistics related to the fishing industry issues, in order to raise some awareness of the issue on behalf of Legend of the Skyfish:

Legend of the Skyfish is available on PC.