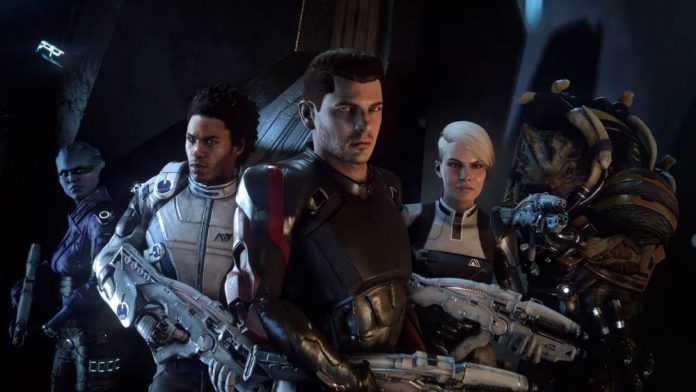 Devout fans of the Mass Effect trilogy are quite angry about how Mass Effect: Andromeda has turned out.

You see, touted as a new start for the series – and the first entry on a new console generation to boot – they expected it to be something rather special. Something that felt like it was a stellar production, introducing them to a new galaxy rife with new experiences within a rich universe that they’ve come to love. What’s been delivered, however, feels a bit half-assed in many ways, and has consequently been the source of much vitriol. I can’t help but feel that most of their venom is driven by needless hyperbole though; that if they just sat down and got on with game they’d actually quite enjoy it despite its flaws. Sometimes people just want things to fail it would seem.

So what is wrong with Mass Effect: Andromeda? Well, let’s start with the writing, shall we? Many would say that the dialogue is stupid, dumbed down and/or simply bad. I’d say that there is some truth in that, but it’s not something I found overly detrimental to the game. The writing in Mass Effect: Andromeda is indeed different – it’s a bit goofy at times, a little tongue in cheek, but personally I enjoy its more light-hearted tone and often humorous nature. People seem to forget the fact that even when faced with hardship you just have to let loose and have a laugh at times. It may seem a little out of place, but it happens. Live with it. At the end of the day, some will undoubtedly prefer the more po-faced approach that Shepard and his crew took to getting business done, and that’s just fine, but others may appreciate the playfulness introduced into Mass Effect: Andromeda by its new protagonist, Ryder.

The next Mass Effect: Andromeda slip-up up for scrutiny is its facial animations, which are admittedly all over the place. Sometimes they’re lifelike. Sometimes they’re unbelievably robotic. Other times they’re simply just weird. The way in which the quality of Mass Effect: Andromeda’s animations change from scene to scene is truly jarring and many will understandably be put off by it. It doesn’t help that character models, especially those of humans, aren’t particularly convincing in any way. Their eyes are often doll-like, their skin flat, their movements wooden; they just have a very distinct lack of next-gen quality to them. Eventually you’re likely to turn a blind eye to most of the mediocre models and animations, but every once in while you will be left reeling from some ghastly sight, I assure you.

Moving on, some may even take issue with the over similarity of Mass Effect: Andromeda’s story to that of previous games in the series. Once again you’re in control of a seemingly elite soldier combating a bipedal alien race armed with guns. As luck would have it, an ancient technology is involved that stands at the centre of it all. Oh, and surprise, surprise, your new ship looks a hell of a lot like the Normandy, and the centre of operations has a whiff of the Citadel about it.  To be honest though, all of this bothers me not. Yes, it’s not exactly original, and it would have been nice if Mass Effect: Andromeda had perhaps changed focus away from shooting aliens in the face, but would it still have been Mass Effect if that was the case? The series has always been a third person cover shooter and that was unlikely to change. Plus Mass Effect: Andromeda does have many of its own unique facets and story ideas that do differentiate it from what has come before, such as setting up settlement outposts. They’re perhaps a little underdeveloped, but they’re still there. 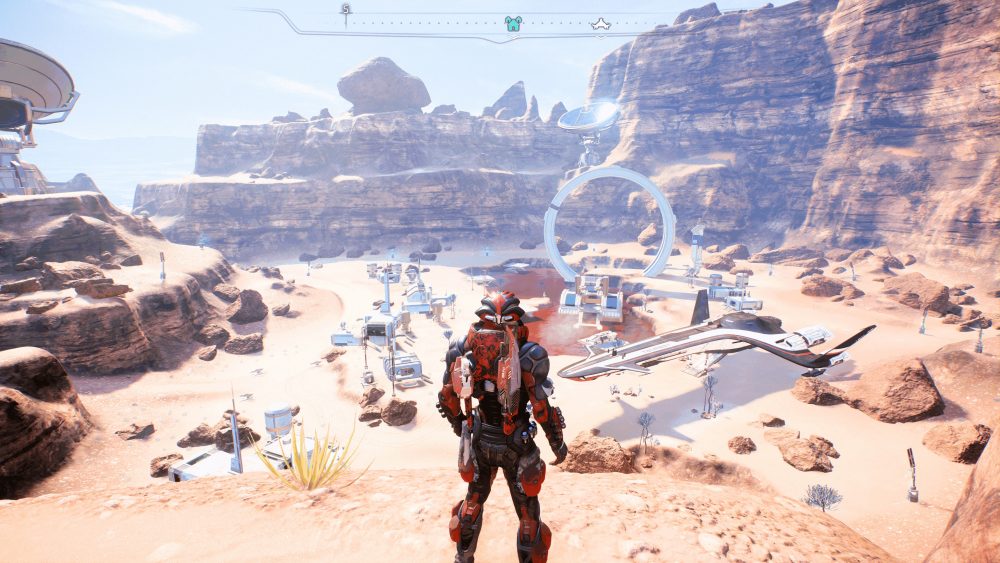 For me, Mass Effect: Andromeda’s more pressing problems are its performance issues and generic quest design. Playing mainly on Xbox One for review, I didn’t encounter too many bugs or glitches, but combat was occasionally hampered by a poor framerate which made precise aiming awkward. On PS4 Pro the issue was less prominent, as you’d expect, but slowdown did still occur at times. Heading straight through Mass Effect: Andromeda’s main story missions is likely to take you around 25 hours, and for the most part it’s an enjoyable and engaging ride full of action. Quite a proportion of the vast number of side quests that pad out the game however feature lazy design that makes them feel like little more than fetch quests. They’re optional, sure, so you don’t have to do them, but it’s no excuse for making you travel backwards and forwards just to talk to someone or painstakingly traipse to point after point on a map to find an object.

With so many issues and disappointments then, it’s understandable that Mass Effect: Andromeda has generated a fair amount of negativity. It’s a shame, as the most important aspect – the gameplay – is generally much improved. Combat is now more open, more kinetic and more chaotic. You have the ability to boost and hover, giving you new ways to avoid and dish out damage. The introduction of profiles and the usual wealth of skill tree options allow you to extensively customise how your character performs. There’s even a research and development system, enabling you to create your own weapons and armour complete with a personal touch if you take the time to gather the required resources. An iffy cover mechanic and the stated framerate issues aside, Mass Effect: Andromeda’s combat is the best in the series. And with a team based multiplayer offering also included, you’re not just confined to enjoying it within the campaign.

What I really enjoy about Mass Effect: Andromeda though is that it brings back the sense of discovery. You can once again land on planets and just explore, heading out to investigate whatever takes your fancy either on foot on in the sturdy six-wheeled Nomad. Each and every alien planet I visited was wonderfully created, featuring its own ecosystem and some stunning views that had me avidly taking screenshots. Whenever I travelled somewhere new during the course of my adventures I’d make sure that I spent some time scanning the local flora and fauna, investigating any structures that I came across whilst doing so. It reminded me of my time spent with the original Mass Effect before everything became more focused and hemmed in for its sequels. That’s something about Mass Effect: Andromeda that I like that a lot.

Okay, so Mass Effect: Andromeda is obviously not as good as it could have been. Once you get over the fact that it’s not quite as polished as its predecessors nor does it further the series in any meaningful way though, you can still appreciate what it is: a Mass Effect game through and through. Sure the writing is a bit dafter and the animation often leaves a lot to be desired, but it still offers some wonderful space exploration with a quality cast of characters that is sure to last you upwards of 40 hours. In fact, those who fully get on board with it could easily spend over 100 hours in its grasp before they’ve resolved every quest; Mass Effect: Andromeda is a bloody big game. So I guess it’s up to you: turn your nose up at it and give Mass Effect: Andromeda a wide berth, or accept its flaws and enjoy it for what it is – a stupider, more rough-around-the-edges Mass Effect game with an increased sense of discovery and livelier combat.

Mass Effect: Andromeda is available now on PS4, Xbox One and PC. We reviewed the Xbox One version.